As you are aware, UPSC has an exceptionally vast syllabus. And it is a very complex task to come up with a study-plan/time-time table that harmonizes every element and takes into consideration the return on investment on certain topics.

We are hell-bent on simplifying things for you. Hence, we have come up with a plan that you will instantly connect with you and give you a vibe that yes you can do it!

Preparation for Prelims and Mains is harmonized. You study a subject, attempt prelims tests and then attempt mains tests for the same. This leads to a solid preparation.

Many institutes our there will not able to present an integrated approach. They offer separate timetables for prelims and mains confusing the students further. That’s not the case with us!

Our Time-table is the easiest to remember and follow. All tests prelims, mains and Samachar Manthan will be held on the weekend.

We are starting with the most important subjects from the exam perspective first. These are very predictable + have a very high return on investment. They need to be mastered if one has to have a shot at the exam. Polity, Modern History, and Economics. The lower priority ones follow afterward.

Subjects have been divided into topics that logically fit together. Eg. for Polity we ask you to prepare in 2 parts – first, till Central Government and second, from State Government and beyond. This division is not ad-hoc and does not break the flow of your studies.

5. Base and Advanced Sources

We have divided the sources into 2 parts, Base Sources, and Advanced Sources. Base sources are those which you have to master. You should come to advanced sources only when you are thorough with the Base Sources. 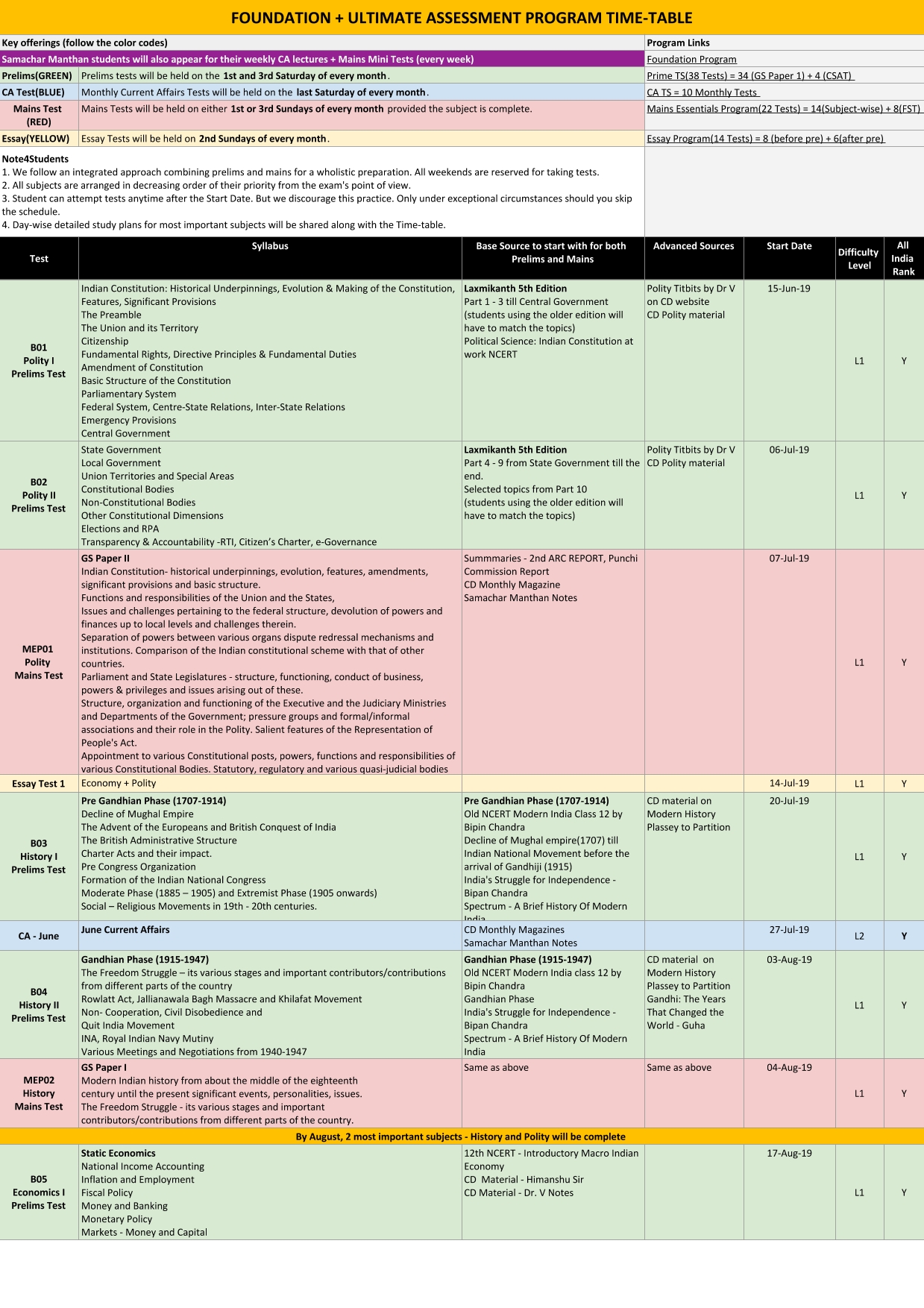 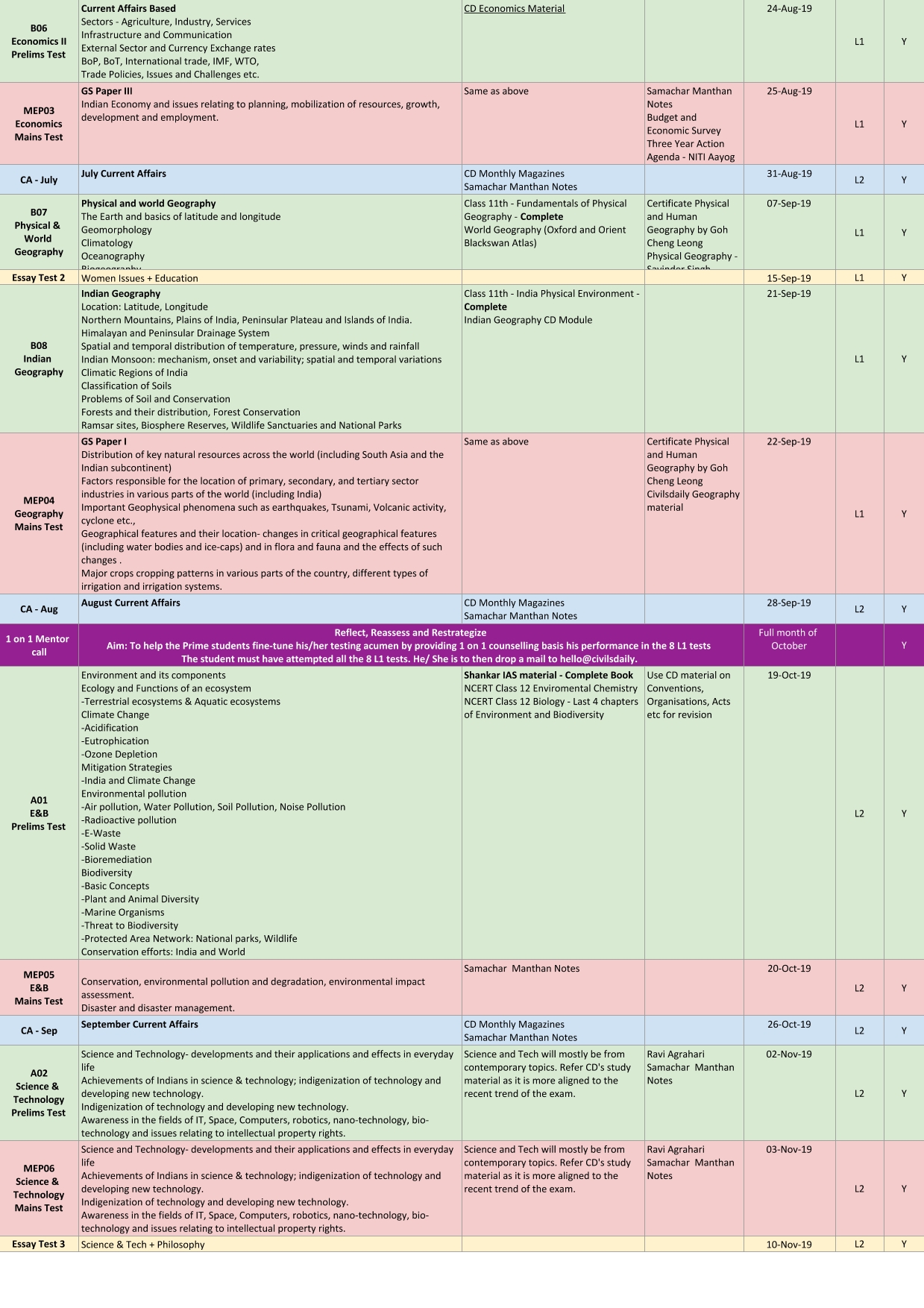 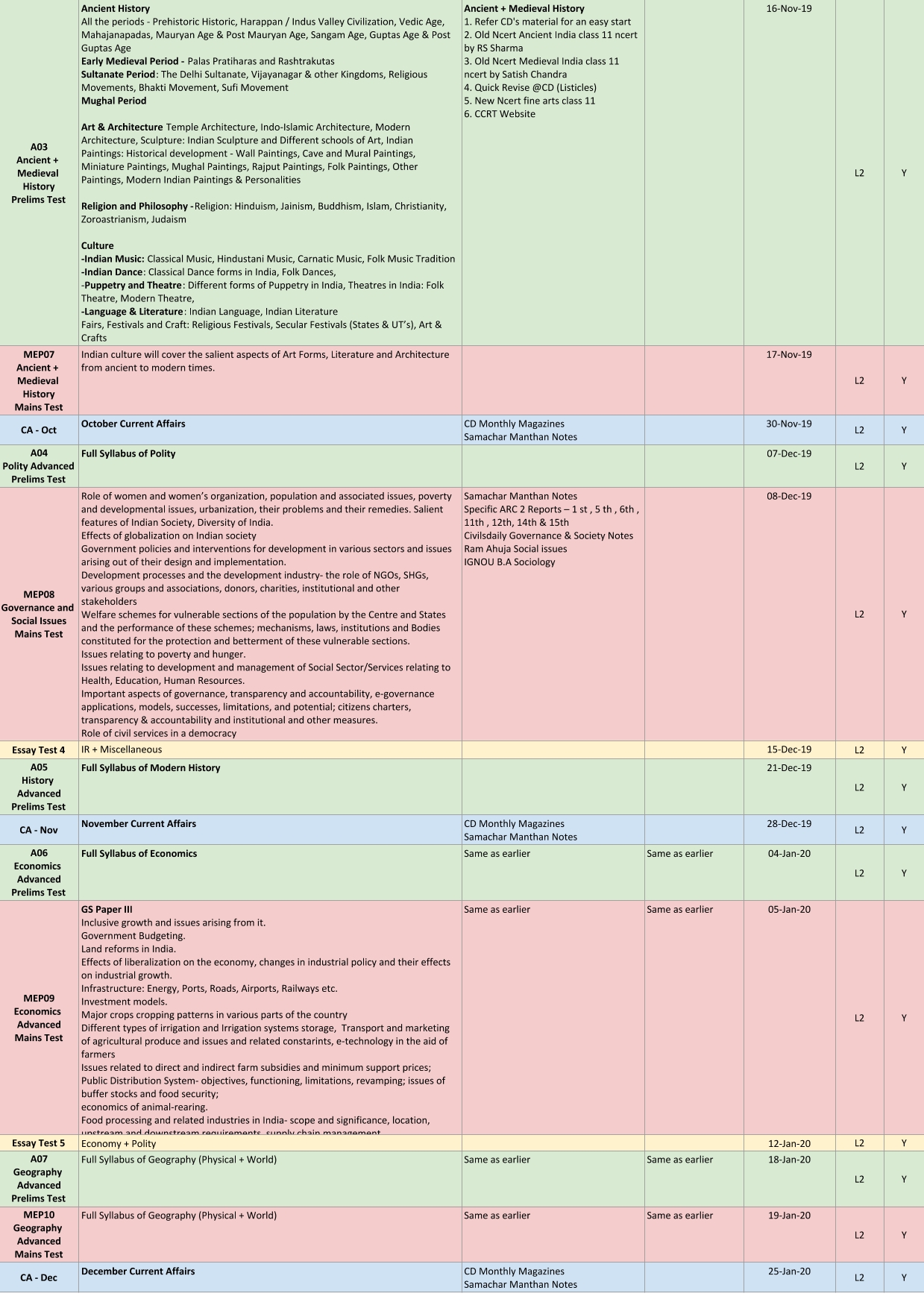 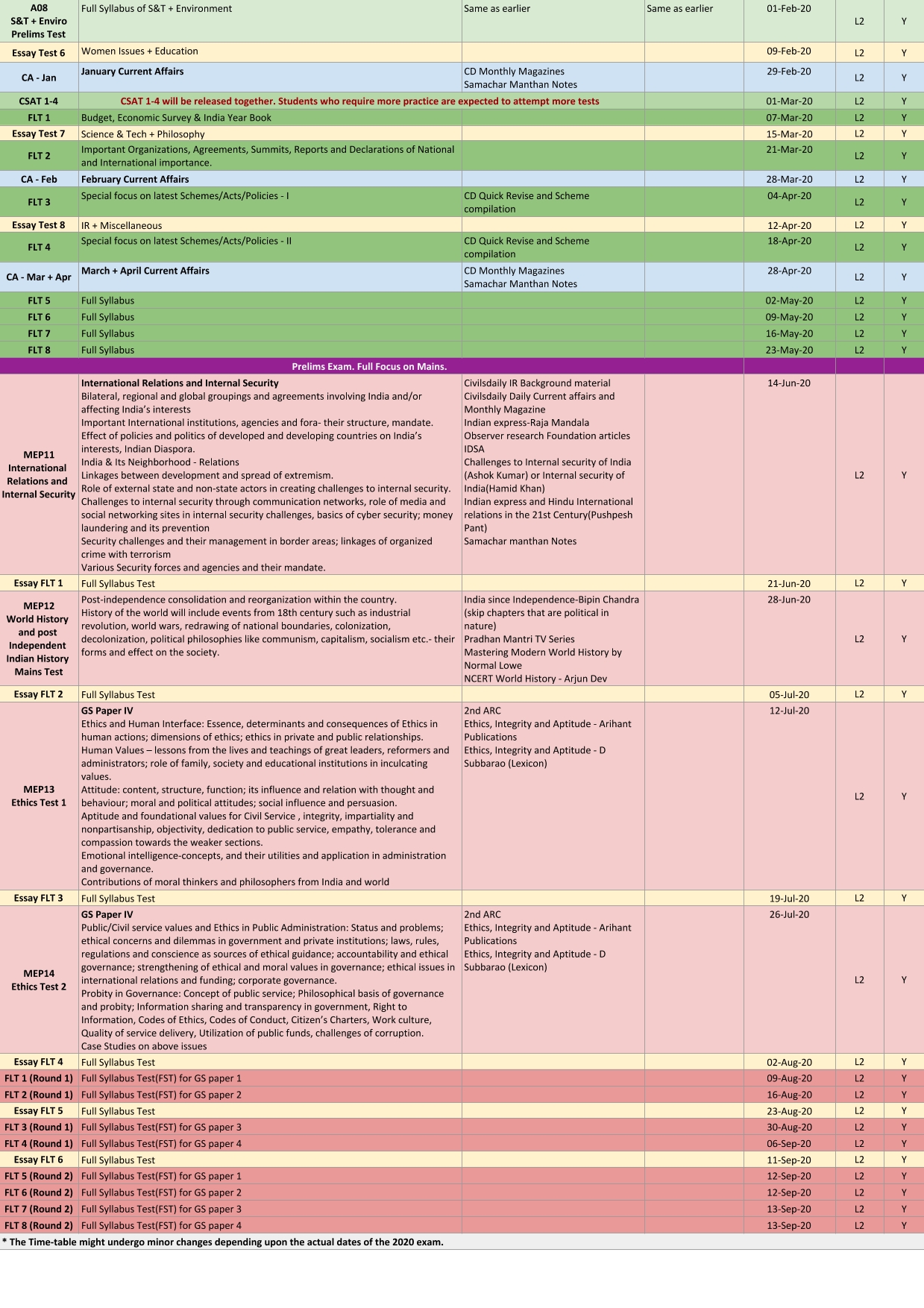 We at Civilsdaily are committed to helping you in the process of figuring out your learning personalities and creating the best time table and suggesting most relevant strategies for your IAS Prep. Please take 5 minutes to fill up this Samanvaya Form. We will arrange a mentor call for you once this is done.

We take our Test Series very seriously. There is a rigorous process involved to decide what goes in and what doesn’t. If you have gone through our Nikaalo Prelims initiative, you would see so many questions that are almost impossible to come up from basic books. This is because we go to different lengths to get this done.

Over 500 students who have cleared prelims before are now enrolled in our FLTs via this initiative. *IMP – Free enrolment in our Full-Length Tests for Prelims Qualified Students

We wanted to present before you the questions we’ve prepared.

UPSC has the habit of asking current affairs oriented questions. We backtrace important questions which can be asked on those events.

Consider the following statements regarding the National Gene Fund,

1. It has been established by the Protection of Plant Varieties and Farmers’ Rights Authority.
2. It receives the contribution from National and State Govt. only.

With reference to the Protection of Plant Varieties and Farmers’ Rights Act, 2001, consider the following statements.

1. It recognizes and protects the rights of both breeders as well as farmers in relation to the plant varieties.
2. The Act facilitates the protection of only new plant varieties.

Context-  PepsiCo, a US multinational company filed case against potato farmers in Gujarat, with regard to alleged infringement of its rights under Protection of Plant Varieties and Farmers’ Rights (PPVFR) Act 2001.

2. Application Based Question– We in all our test keep the focus on the application based questions in all segments.

Floods caused due to an outburst of glacial lakes is known as Glacial Lakes Outburst Floods (GLOF). Consider the following factors in this regard:

Which of the factors given above can trigger glacial lakes outburst floods?

1. Addition of a day on the crossing of International Date Line from West to
East.
2. Change in direction of rotation of Tropical Cyclones.
3. Reversal of geographical poles of Earth.

Select the correct answer using the code
given below.

3. Few out of league questions which cannot be found in standard textbooks.

1. It uses less water than traditional transplanted paddy cultivation.
2. It eliminates the need for weedicides.
3. Its adoption results in increased greenhouse gas emissions.

We have done through analysis of last 6 years prelims papers. We have divided subjects into themes and sub-themes. Our tests include more questions from those themes from which UPSC is asking more questions and fewer questions from those themes which UPSC has ignored in the last 6 years. The Questions at CD are not framed according to the whims and fancies of the content writer. The question framer has to provide objective evidence to the supervisory team about the relevance of the question. He has to prove that similar questions were asked by UPSC in xyz year. The philosophy of our test series is to remain as much close to the UPSC prelims exam as possible both in terms of toughness and Format.

Tikdams are smart hacks which help you arrive at the right answer with just the basic knowledge. Tikdam Technique is an innovation by Dr. V(AIR 20) and has helped students gain additional marks. Our TS is the only TS that puts a conscious effort to build student’s risk-taking appetite. Our each and every test contains detailed explanation wrt to questions which can be solved using this technique. By perfecting this technique you can easily score 20-30 marks extra in your prelims exam.

Which of the pairs given above is/are correctly matched?

Originally the theatre form from Haryana, Swang, was mainly music-based. Gradually, prose too played its role in the dialogues. The softness of emotions, accomplishment of rasa along with the development of character can be seen in this theatre form. The two important styles of Swang are from

Rohtak and Haathras. In the style belonging to Rohtak, the language used is Haryanvi (Bangru) and in

Nautanki is usually associated with Uttar Pradesh. The most popular centres of this traditional theatre

form are Kanpur, Lucknow and Haathras. The meters used in the verses are: Doha, Chaubola, Chhappai,

Behar-e-tabeel. There was a time when only men acted in Nautanki but nowadays, women have also

started taking part in the performances. Among those remembered with reverence is Gulab Bai of Kanpur.

She gave a new dimension to this old theatre form.

Bidesia:The folk theatre form of Bidesiya has originated in the 20th century and has been prevalent in the Bhojpuri-speaking regions of Bihar. Bidesiya is a dance version of Biraha songs and expresses the pain and despair of the women who are left behind by their men, away from home. The male dancers play the roles of female in the Bidesiya folk dance and for the purpose; they wear artificial long hair and dhoti. Despite the fact that many new modes of entertainment has come up, Bidesiya still has its charm amongst the people of Bihar.

It’s tough to remember the name of all the folk theatre. However using some logic you can easily solve this question. Now closely observe statement 2.

Bidesia.Does it look like a Tamil name? Of Course not. Bidesia sounds like a Bhojpuri name. Once you eliminate statement 2 using this logic, you will automatically arrive at the correct answer without knowing the other 2 statements.

Don’t miss out on the program. Get enrolled NOW!

We understand that the UPSC exam is a generalist exam. It’s more important to cover more issues than to cover one issue in more depth. Hence, through Samachar Manthan, we are trying to maintain a fine balance of covering many important news items and having a detailed discussion on selected topics which require the same. On daily basis a news gets repeated multiple times. Scattered knowledge is not adequately useful when you have to write a 200 words answer within 6-7 minutes. To handle this, Samachar manthan covers such issues in a comprehensive and consolidated manner which is the smart strategy.

For example this week, we will be covering the following issues;

Trivia
M.N. Roy and his contribution for anti-colonial struggle in India

And these issues will be covered in detail

So to be thorough in your preparation and to have an integrated approach, join Samachar Manthan here.

At Civilsdaily, we have been able to decode many of the repeating themes and trends of the actual UPSC exam. These have become best practices that we incorporate while making questions for our Test Series and Open Tests.

Despite that, we cannot stress enough on the importance of attempting the actual UPSC exam paper in exam settings. There are 3 things you will gain out of it.

At least 2014-2016 papers are a must and one should remember all questions from these.

Here we present the 2014 Prelims Paper.

*Please note – Our Test Series has far more detailed explanations and remarks. These solutions were prepared on the same day the exam happened. Hence they are not that detailed to appeal to a layman.

You have already completed the quiz before. Hence you can not start it again.

You have to finish following quiz, to start this quiz:

At Civilsdaily, we have been able to decode many of the repeating themes and trends of the actual UPSC exam. These have become best practices that we incorporate while making questions for our Test Series and Open Tests.

Despite that, we cannot stress enough on the importance of attempting the actual UPSC exam paper in exam settings. There are 2 things you will gain out of it.

*Please note – Our Test Series has far more detailed explanations and remarks. These solutions were prepared on the same day the exam happened. Hence they are not that detailed to appeal to a layman.

You have already completed the quiz before. Hence you can not start it again.

You have to finish following quiz, to start this quiz: