The topic of nuclear fusion has been in news following the success of the Chinese Scientist at Hefei Institute of Physical Science, where they came a Step Closer To Creating An Artificial Sun. 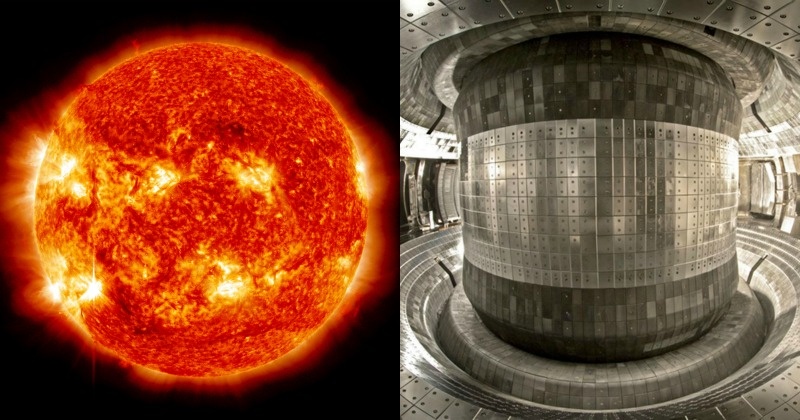 The process in which two nuclei of light atoms (like that of hydrogen) combine to form a heavy, more stable nucleus (like that of helium), with the liberation of a large amount of energy is called nuclear fusion.

It takes huge amount of energy to put together two nucleus of even a lighter element like hydrogen, which can only be generated through intense heating, so much, so that the atoms turn into plasma state of matter and experience intense acceleration, required to overcome the large force of repulsion between two nucleus.

Heating the light atoms to an extremely high temperature carries out the nuclear fusion; the process is thus called thermo-nuclear reaction. There is some loss of mass during the fusion process, which produces a tremendous amount of energy.

There are three difficult requirements for a sustained nuclear fusion reaction, and they must all be met simultaneously. Scientists must

ENGINEERING PROBLEMS SO FAR ENCOUNTERED IN ITS DEVELOPMENT

Two scientists, Martin Fleischmann of the University of Southampton, England, and B. Stanley Pons of the University of Utah, U.S.A., did a simple experiment by which they claimed to have found that it would be possible to duplicate in the laboratory what occurs in the sun at temperatures of millions of degrees. The reported results received wide media attention and raised hopes for a cheap and abundant source of energy. Many scientists tried to replicate the experiment with the few details available. Hopes fell with large no of negative replications, withdrawal of many positive replications, discovery of flaws and sources of experimental error in the original experiment, and finally the discovery that the scientists had not actually detected nuclear reaction by products.

‘ADITYA’ is a medium-sized Tokamak conceived, designed and fabricated indigenously and it is commissioned and operational at the Institute of Plasma Research, Gandhinagar. The chief scientific objectives of ADITYA are:

THE RECENT BREAKTHROUGH IN CHINA

Scientists at the Hefei Institute of Physical Science produced hydrogen gas more than three times hotter than the core of the Sun. They did this inside the Experimental Advanced Superconducting Tokamak (EAST) fusion device. The scientists managed to maintain the extremely high temperature – 50 million C°– for 102 seconds, a feat not achieved anywhere in the world yet.

The scientists were aiming for 100 million Kelvins for over 1,000 seconds (nearly 17 minutes).

MECHANISM OF THE NEW PROCESS

Inside the EAST device, a large metallic doughnut-shaped chamber, using magnetic confinement approach or in a tokamak reactor, hydrogen isotopes ‘deuerium’ and ‘tritium’ are collided at high speeds to produce helium. This produces a large amount of energy, akin to almost a medium-scale thermonuclear explosion. The heat produced inside the EAST device is 8,600 times that of the Earth’s core.

To keep the helium gas suspended in the fusion chamber the scientists created a magnetic field using superconducting coils fitted across the structure.

Many safety layers need to be put in place, so make it radiation protected, disposal of waste, etc.