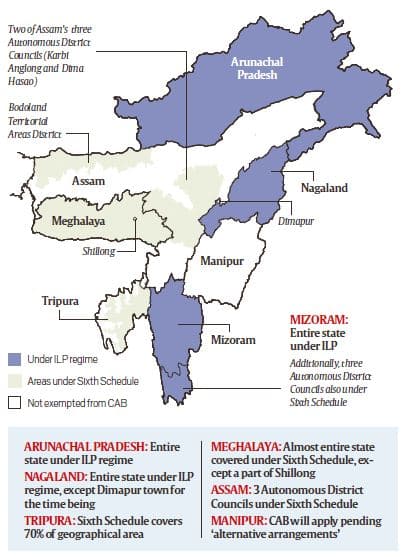 In the revised version of Citizenship (Amendment) Bill (CAB) which is set to be introduced, the Centre has exempted certain areas in the Northeast, where the Bill has been facing protests.

In effect, it exempts the whole of Arunachal Pradesh, Nagaland and Mizoram, almost the whole of Meghalaya, and parts of Assam and Tripura, but keeps all of Manipur under its ambit.

Why are three states totally exempted?

How does the ILP system work?

What does this exemption mean for beneficiaries under CAB?

What is the Sixth Schedule, and which areas are exempted from CAB?

So, why has Manipur been an exception to both these kinds of regimes?

What about Manipur’s tribal areas?

Are there any other provisions for Manipur?

What about other states in the Northeast?