Prelims level : AWARE tool by WHO 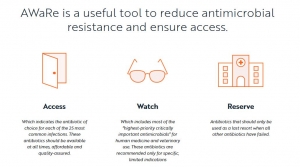 The tool, known as ‘AWaRe’, classifies antibiotics into three groups: