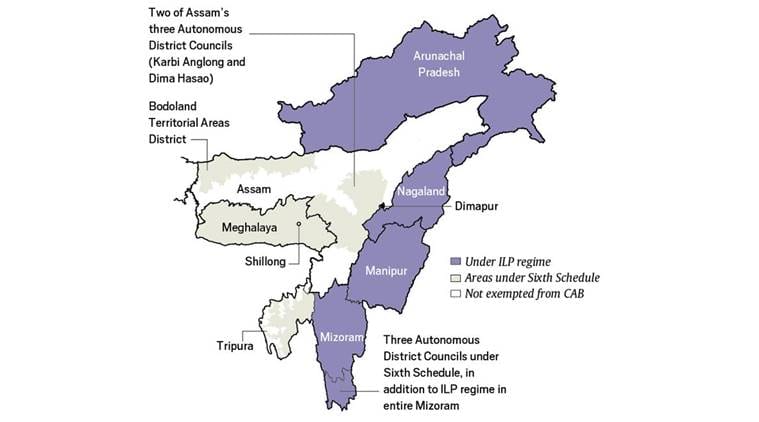 In the protests in the Northeast against the Citizenship Amendment Bill (CAB), 2019, the outrage has been most intense, sustained and widespread in Assam as its larger part is under CAB.

There are two categories that have been given exemption — states protected by the ‘Inner Line’, and areas covered under the Sixth Schedule of the Constitution.

Assam: The state has three Autonomous District Councils, two of which are geographically contiguous. While these are protected, CAB will be in effect in a larger area.

Meghalaya: This state too has three ADCs. Unlike in Assam, the ADCs in Meghalaya cover almost the entire state. Only a small part of Shillong is not covered. CAB will be effective in that part of Shillong while the rest of the state is protected.

Tripura: One ADC covers around 70% of the state’s area. However, the remaining 30% holds about two-thirds of the population. CAB is effective in the smaller, more densely populated regions.

Nagaland: Entire state covered under ILP regime, protected from CAB. So far, only Dimapur used to be outside the regime. Now, ILP has been extended to Dimapur, too, so the whole state is now exempt.

Mizoram: Entire state covered under ILP regime, protected from CAB. Additionally, the state has three ADCs that are also protected under the Sixth Schedule.

Manipur: Entire state gets new ILP protection. The state was not protected under either option, but following the introduction of CAB in Parliament, the government has introduced ILP in Manipur too.