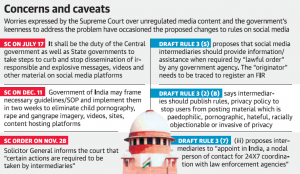 Mains level: Menace of unlawful content over social media and measures to curb it