Mains level: Significance of the international recognition in promotion of organic farming practice  at pan-India level.

Aim of the Award 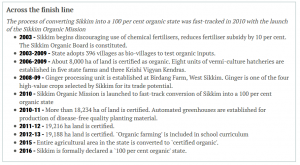