Mains level: The newscard ends the debate surrounded by Aadhaar. Every statement of the Judgment is vitally important.

Insulating children from the Aadhaar regime

Aadhaar not a hurdle for Divyangs, Elderly

Aadhaar not a Surveillance tool 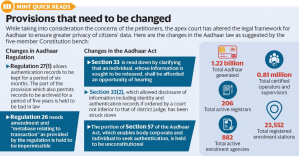