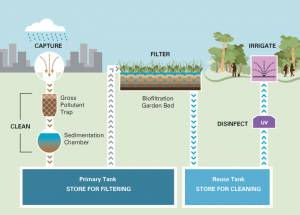 Urban drainage is more about town planning and water management, rather than just a sanitation issue. It involves environmentally sound systems of collecting, reusing and disposing of all forms of unwanted water from the cities. No single formula works for all, but the best global models integrate systems of public health and water management with local hydrology, broadly the process in which an area’s water is depleted and replenished.

Using dual-membrane & ultraviolet technologies to produce purified water that exceeds WHO standards, Out of the 20 million gallons produced per day, 6% is used for drinking purposes.

Creating wastewater tunnel. Running under the river, it has an automatic distribution and pumping system that controls the discharge of waster-water, preventing pollution of the River Wien.

Installing bioswale with intermittent check dams is to prevent silt & pollutant runoff from entering the River. As a result suspended soilds including garbage entering the river system are reduced by 50%.

Using RWH for fire-fighting and as drinking water. The rooftop harvesting collects most rainwater, draining it into a 1,000 m3 underground tank, which is then used for flushing and air conditioning.