The Cabinet recently approved the disinvestment plan for Air India and its five subsidiaries. It is being seen as Government’s one of the boldest reform moves till date. The Government is hopeful that the decision will attract a positive response and will revive Air India. The carrier has already been surviving on a bailout package. Last month, the NITI Aayog in its report had recommended the disinvestment of Air India 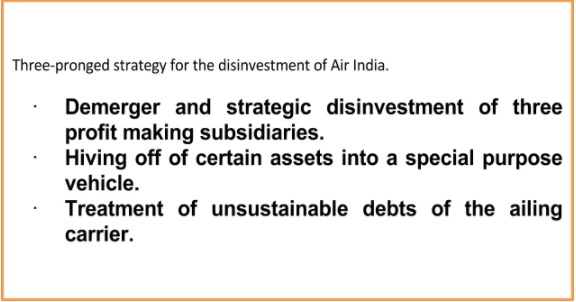 Group of ministers (GoM) to decide,

The government will have to streamline its FDI policy so that foreign investors can buy a stake in Air India. The Civil Aviation Ministry has also made a case for the sale of non-core assets first to pay off existing creditors, so that the airline becomes more attractive to private buyers.

The task of strategic disinvestment of Air India is complex.

The sale’s purpose should guide the sale’s rules.

“Government should only be a facilitator of business rather than doing business itself”. Analyse the statement in the light of disinvestment of air India