High speed rail is one of the most ambitious project of the Modi Government. It is also related to Infrastructure topic in the GS paper 3

The government of India recently decided to build a high-speed rail (HSR) corridor between Mumbai and Ahmadabad at a cost of Rs 97,636 crore with Japanese financial and technical assistance.

What do we understand by High Speed Rail?

India has one of the Largest rail Networks in the world, but as of now it does not consist of any line classed as  (HSR), which allows an operational speed of 200 km/h or more. The current Fastest Train in India is the Gatimaan Express that runs with a top speed of 160 km/h, with average speed of above 100 km/hr between Delhi and Agra.

The first Proposed High speed Train in India would run some 500 kilometers (310 miles) between India’s financial capital Mumbai and the western city of Ahmadabad, at a top speed of 320 km/h. Under the Japanese proposal, construction is expected to begin in 2017 and be completed in 2023. It would cost about 980 billion (US$15 billion) and be financed by Low interest loan from Japan. 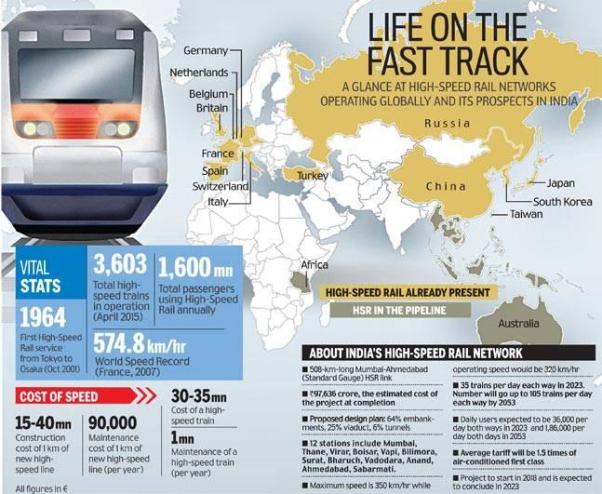 The project looks ambitious but challenges are many

Bullet train has sets of pros and cons under India’s present situations and they need to be properly handled so that it brings prosperity and development in the country and not debacles. Every factor must be considered wisely and safeguarding of people’s living should not be compromised. There are risks in this project but without risks nothing big can be acquired

(Q) The government of India recently decided to build a high-speed rail (HSR) corridor between Mumbai and Ahmedabad at a cost of Rs 97,636 crore with Japanese financial and technical assistance.  Does India need projects such as this at such a high cost? Comment.