In the previous posts, we studied the Himalayan and Peninsular river systems in detail. Before we move further, let’s list the key differences between them:

The Shifting Courses of Rivers:

An interesting phenomenon observed in the case of most of the peninsular and extra-peninsular rivers is that they have shifting courses, especially in their lower reaches. In the upper reaches, the Himalayan rivers have the tendencies of river capturing.

Wondering why a river shifts its course? There can be numerous reasons as to why a river shifts its course. It could be a response to physiographic changes or it could be a part of its natural evolution e.g. fast-flowing rivers are prone to silting up as they surge down the hills and spread out on the plains, allowing sand and suspended matter to deposit in their slower, wider depths. Over time, the deposits create resistance, forcing the river to move to an area of lower resistance. This leads to a shift in its course.

The ancient Saraswati river, which provided an abode for the early Aryan settlers presents a typical example of shifting courses and river capturing. Descending from the Himalayan ranges, its initial course during the prehistoric period was passing near Churu (about 2000 to 3000 BC) and the Luni river was one of its tributaries.

It gradually shifted towards west till it joined the Satluj near Ahmadpur. Later on, the water of its upper course was captured by a tributary of the Ganga river, as a result of which, its lower course became dry. This gave birth to the Yamuna river, an important tributary of the Ganga river system. Even today, the dry valley of the Saraswati river is found in the Rajasthan area in the form of Ghaggar valley.

Similar shifting has also been observed in the rivers of Punjab during historical past. The records of 3rd century BC show that the Indus flowed more than 130 km east of its present course, through the now practically dry beds of the deserted channel, to the Rann of Kachchh which was then a gulf of the Arabian Sea. Later on it gradually shifted west and occupied its present position.

Even the entry of Brahmaputra into the plains of Assam is an outcome of the process of river capturing. According to geologists, during early days, the Tsangpo river of Tibet taking an easterly course used to join the Irrawaddy river (Myanmar) through the Chindwin, which was then a large river, transporting huge quantity of water. Later on, a small river flowing along the southern slopes of the Himalayas through its headward erosion captured the water of the Tsangpo river, and thus helped in the evolution of the stream of Brahmaputra.

Kosi and Gandak are notorious for changing their courses during floods.

With this, we conclude our discussion on the Indian Drainage system. Let’s now try to attempt some related questions from the past UPSC examinations:

Question: The Alamatti is on the river:

Question: In the map shown in the given figure, river labelled as 1,2,3 and 4 respectively: 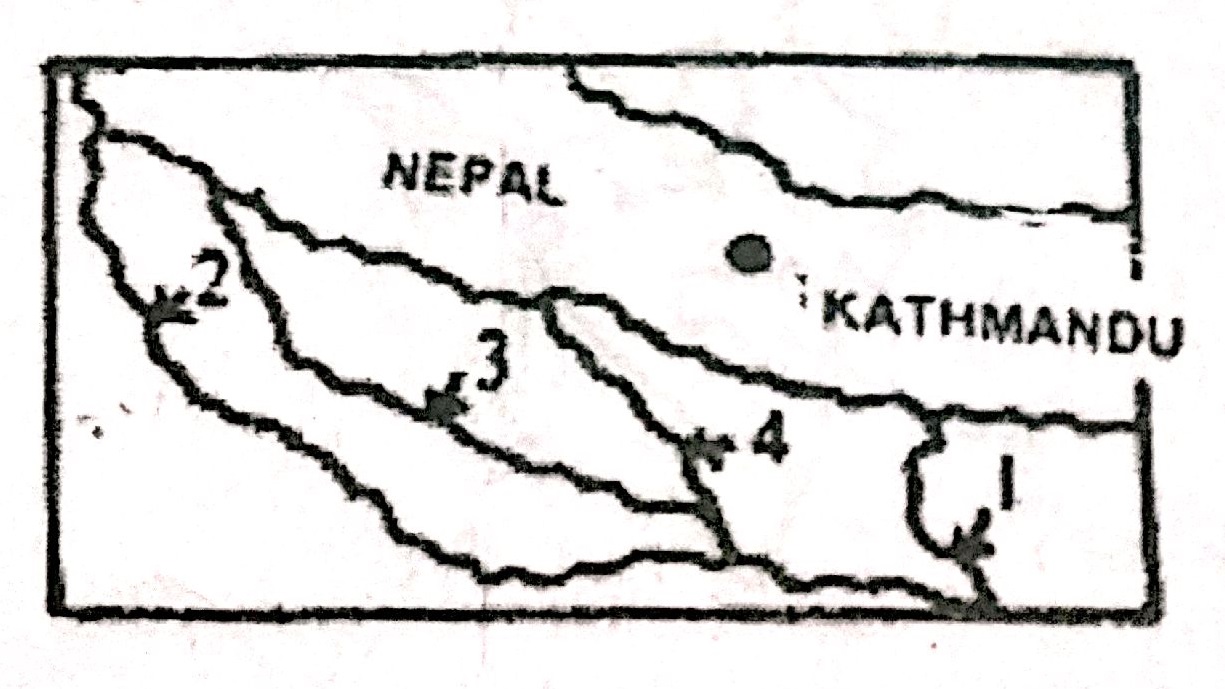 A. Kosi, Gomati, Ghaghara and Gandak

B. Kosi, Ganga, Gomati and Ghaghara

Question: Which of the following east-flowing rivers of India has rift valley due to down warping?

Question: Which one of the following statements is not true?

A. Ghaggar’s water is utilised in the Indira Gandhi canal

B. Narmada rises from the Amarkantak region

C. Nizam Sagar is situated on the Manjira river

D. Penganga is a tributary of the Godavari.

Question: The correct sequence of the eastward flowing rivers of the Peninsular India from north to south is

Question: What is the correct sequence of the rivers – Godavari, Mahanadi, Narmada and Tapi in the descending order of their lengths?

Question: Which one of the following statements is not correct?

A. Mahanadi river rises in Chattisgarh.

B. Godavari river rises in Maharashtra.

Question: Between which of the following was the ancient town of Takshasila located?

A. Indus and Jhelum.

B. Jhelum and Chenab.

Question: From north towards south, which one of the following is the correct sequence of the given rivers in India?

Question: Match List-I with List-II and select the correct answer using the code given below the lists:

Question: Which of the following rivers originates at Amarkantak?

Question: Assertion (A): River Kalinadi is an east-flowing river in the southern part of India.

Reason (R): The Deccan plateau is higher along its western edge and gently slopes towards the Bay of Bengal in the east.

Question: There is no formation of deltas by rivers of the Western Ghat. Why? (2013/10 marks)

Question: What are the causes for dominant dendritic pattern of drainage in the Gangetic plains? (2010/5M)

Question: Why do the rivers of the peninsular India have well defined rigid channels in sharp contrast to the Himalayan rivers? (1995/2M)

Question: Name the major international rivers flowing through India. What countries/States are covered by the Ganga and Godavari rivers on their course from their source to the sea? (1980/2M)