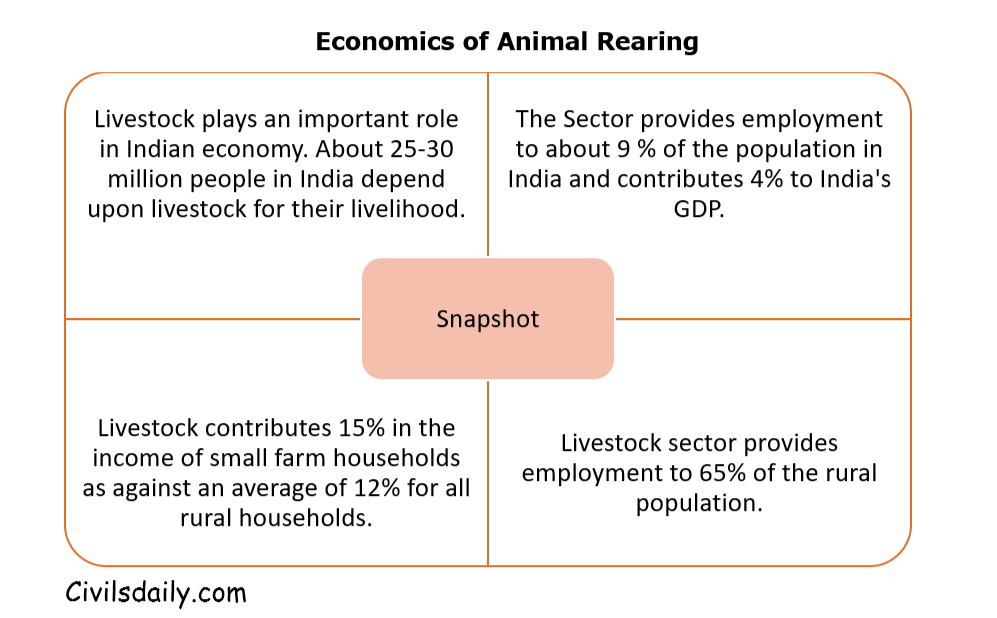 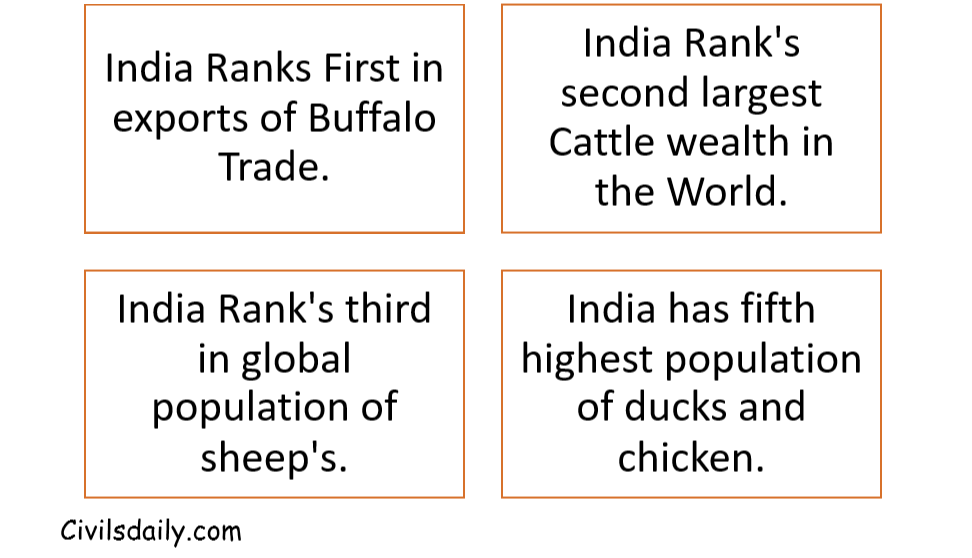 Importance of Livestock sector in the Indian Economy. 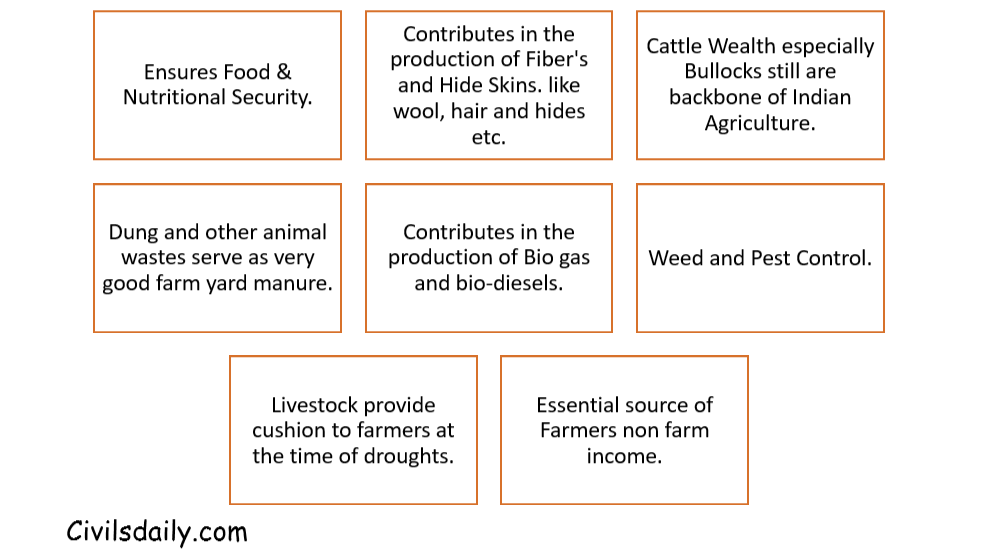 Importance of Livestock sector in achieving Inclusive Growth in India

Schemes/Policies Launched for Livestock Sector by the Government

The National Livestock Mission (NLM) has commenced from 2014-15. The Mission is designed to cover all the activities required to ensure quantitative and qualitative improvement in livestock production systems and capacity building of all stakeholders. The Mission will cover everything germane to improvement of livestock productivity and support projects and initiatives required for that purpose subject. This Mission is formulated with the objective of sustainable development of livestock sector, focusing on improving availability of quality feed and fodder. NLM is implemented in all States including Sikkim.

NLM has 4 submissions as follows:

The Sub-Mission on Fodder and Feed Development will address the problems of scarcity of animal feed resources, in order to give a push to the livestock sector making it a competitive enterprise for India, and also to harness its export potential. The major objective is to reduce the deficit to nil.

Sub-Mission on Pig Development in North-Eastern Region: There has been persistent demand from the North Eastern States seeking support for all round development of piggery in the region. For the first time, under NLM a Sub-Mission on Pig Development in North-Eastern Region is provided wherein Government of India would support the State Piggery Farms, and importation of germplasm so that eventually the masses get the benefit as it is linked to livelihood and contributes in providing protein-rich food in 8 States of the NER.

Sub-Mission on Skill Development, Technology Transfer and Extension: The extension machinery at field level for livestock activities is very weak. As a result, farmers are not able to adopt the technologies developed by research institutions. The emergence of new technologies and practices require linkages between stakeholders and this sub-mission will enable a wider outreach to the farmers.All the States, including NER States may avail the benefits of the multiple components and the flexibility of choosing them under NLM for a sustainable livestock development.

Key features of the mission

Idea behind the Mission?

‘Operation flood’ a program started by National Dairy Development Board (NDDB) in 1970 made India the largest producer of the milk in the world. This program with its whopping success was called as ‘The White Revolution’. The main architect of this successful project was Dr. Verghese Kurien, also called the father of White Revolution.

Kurien has since then built this organization into one of the largest and most successful institutions in India. The Amul pattern of cooperatives had been so successful, in 1965, then Prime Minister of India, Shri Lal Bahadur Shastri, created the National Dairy Development Board (NDDB) to replicate the program on a nationwide basis citing Kurien’s “extraordinary and dynamic leadership” upon naming him chairman.

The Operation Flood was completed in three phases:

Phase I (1970-79):- During this phase 18 of the country’s main milk sheds were connected to the consumers of the four metros viz. Mumbai, Delhi, Chennai and Kolkata. The total cost of this phase was Rs.116crores. The main objectives were, commanding share of milk market and speed up development of dairy animals respectively hinter- lands of rural areas.

Phase III (1985–1996):- The dairy cooperatives were enabled to expand and strengthen the infrastructure required to procure and market increasing volumes of milk. Veterinary first-aid health care services, feed and artificial insemination services for cooperative members were extended, along with intensified member education. It went with adding 30,000 new dairy cooperatives to the 42,000 existing societies organized during Phase II. Milk sheds peaked to 173 in 1988-89 with the numbers of women members and Women’s Dairy Cooperative Societies increasing significantly.

Amul: (“priceless” in Sanskrit. The brand name “Amul,” from the Sanskrit “Amoolya,” formed in 1946, is a dairy cooperative in India.

It is a brand name managed by an apex cooperative organization, Gujarat Co-operative Milk Marketing Federation Ltd. (GCMMF), which today is jointly owned by some 2.8 million milk producers in Gujarat, India. The White Revolution’s model dairy board was that of Amul. The whole program of NDDB was largely based the working of this dairy board. The three-tier ‘Amul Model’ has been instrumental in bringing about the White Revolution in the country.

Achievements of the White Revolution

Realizing the immense scope for development of fisheries and aquaculture, the Government of India has restructured the Central Plan Scheme under an umbrella of Blue Revolution.

The Scheme Blue Revolution: Integrated Development and Management of Fisheries is being implemented in consultation with all States & UTs. Besides the activities undertaken under both the marine and inland sectors, no specific role for the coastal states has been defined.

The Blue Revolution is being implemented to achieve economic prosperity of fishermen and fish farmers and to contribute towards food and nutritional security through optimum utilization of water resources for fisheries development in a sustainable manner, keeping in view the bio-security and environmental concerns.

Under the scheme, it has been targeted to enhance the fish production from 107.95 lakh tonnes in 2015-16 to about 150 lakh tonnes by the end of the financial year 2019-20. It is also expected to augment the export earnings with a focus on increased benefit flow to the fishers and fish farmers to attain the target of doubling their income.

The Department has prepared a detailed National Fisheries Action Plan-2020(NFAP) for the next 5 years with an aim of enhancing fish production and productivity and to achieve the concept of Blue Revolution. The approach was initiated considering the various fisheries resources available in the country like ponds & tanks, wetlands, brackish water, cold water, lakes & reservoirs, rivers and canals and the marine sector.

Challenges faced by the fisheries sector

Reason Behind this growth

Challenges the Poultry sector is facing

The Following measures should be taken by the Government to improve the situation.