The study of coins is known as Numismatics. The importance of coins as a source of reconstructing history cannot be denied, particularly in case of ancient history where very few chronicles were produced.

The Harappan Seal is the most distinctive artefact of the Indus Valley Civilization. It was made of a stone called steatite. However, it’s believed that it was *NOT* used as a coin. It served various other purposes like – sealing a package of trade, as amulets, etc.

The earliest account of issuing of coins dates back to the 7th-6th Century BC. These coins were ‘punched-mark’ coins made in silver. They were initially issued by merchant guilds and later, by the state.

For the first time, we see regular Dynastic coins being issued.

The Greeks bring along their old age tradition of issuing coins. They are the first ones to issue gold coins(besides the use of Silver).

It is then followed by the Kushan Empire who become the first Indian Empire to issue gold coins.

The Western Kshatrap coins are reckoned to be the earliest coins bearing dates. 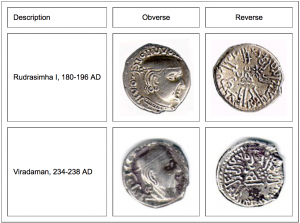 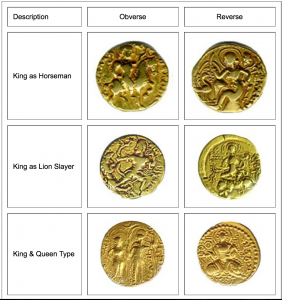 We see the decline in the number of coins produced in this phase suggestive of a decline in trade and commerce.