“Infrastructure is generally understood as the basic building blocks required for an economy to function efficiently”. 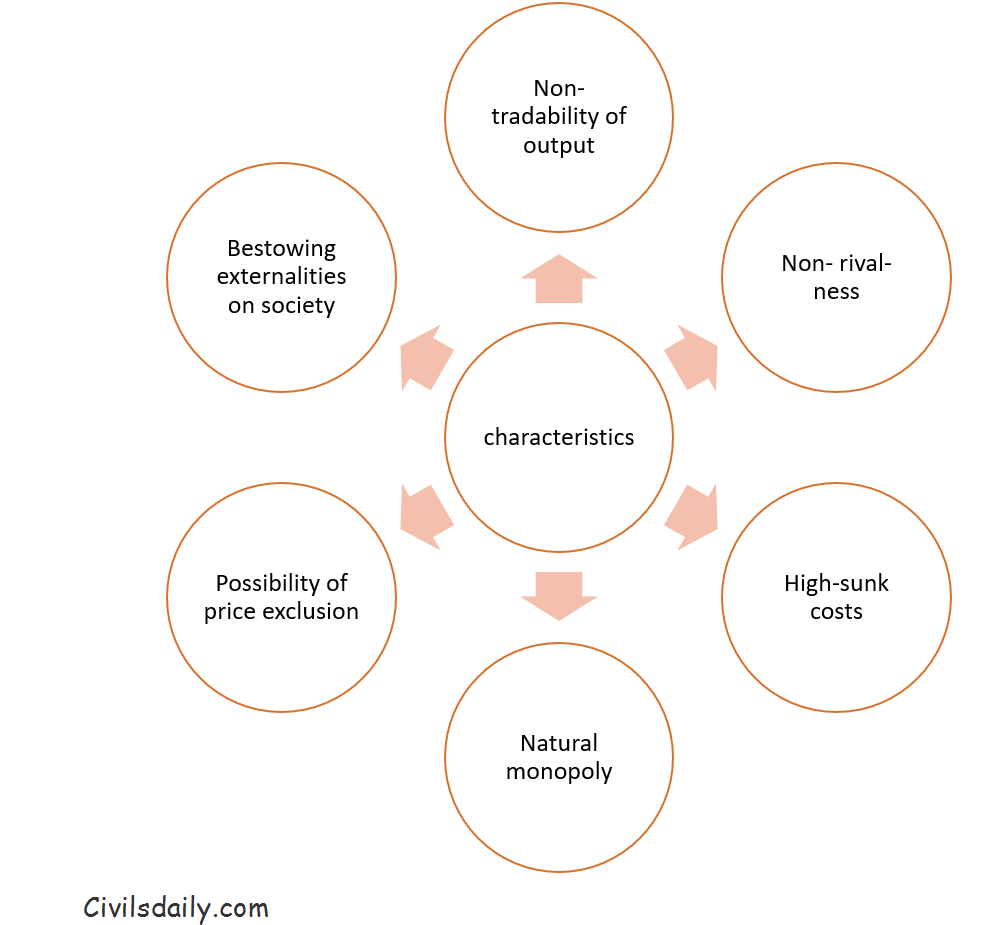 Based on these features (except b, d, and e), the Commission recommended inclusion of following in infrastructure in the first stage: 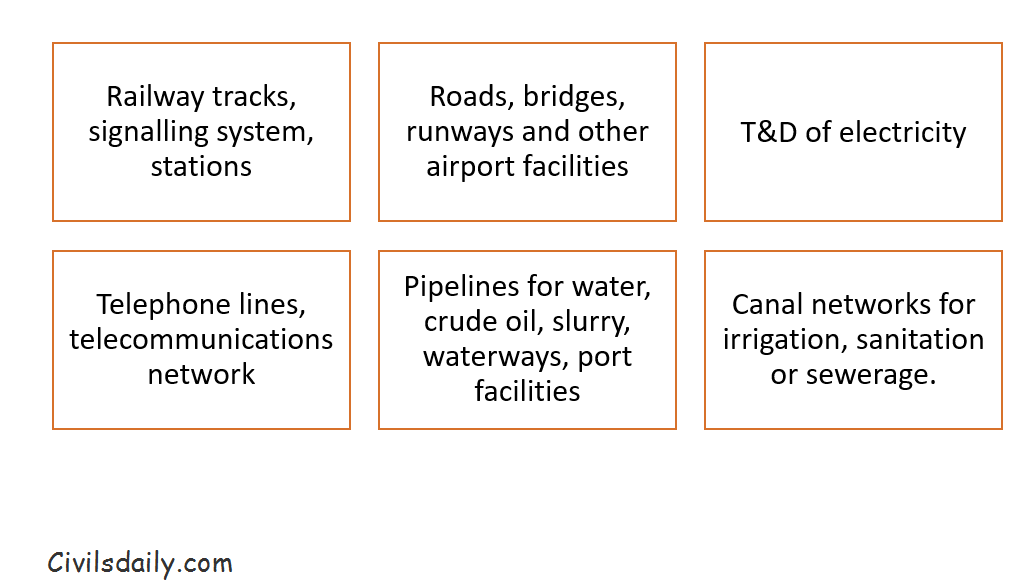 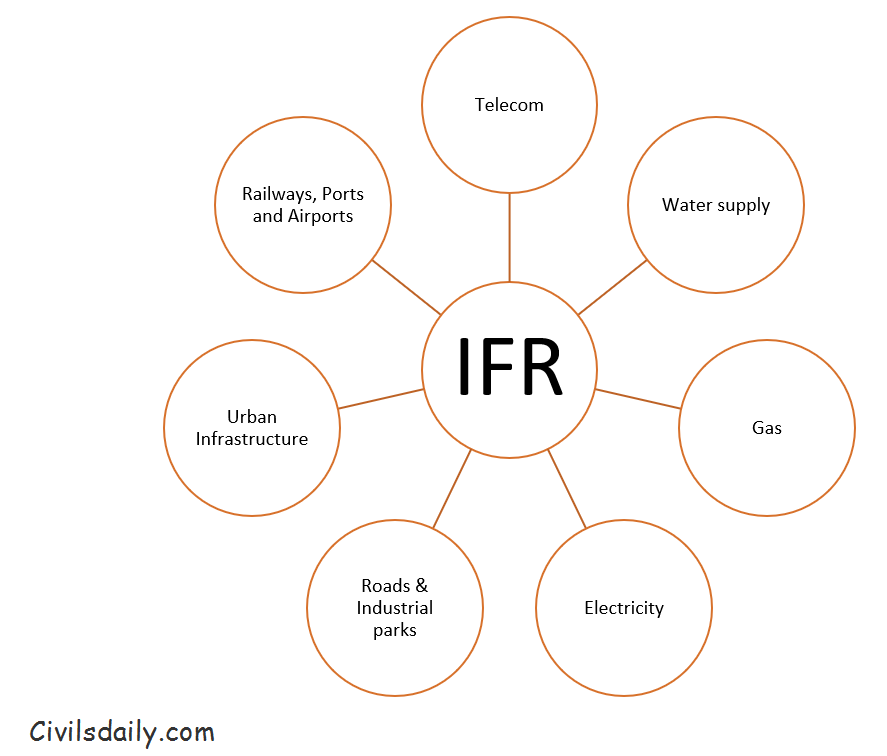 Why do Infrastructure Matter for Growth & Development?

There is, indeed, a plethora of anecdotal and more technical evidence that suggests development of infrastructure can lead to growth and development of an economy.

Example: A massive road-building exercise in a poorly developed state can offer a one-time boost production activity and productivity of workers in the state. 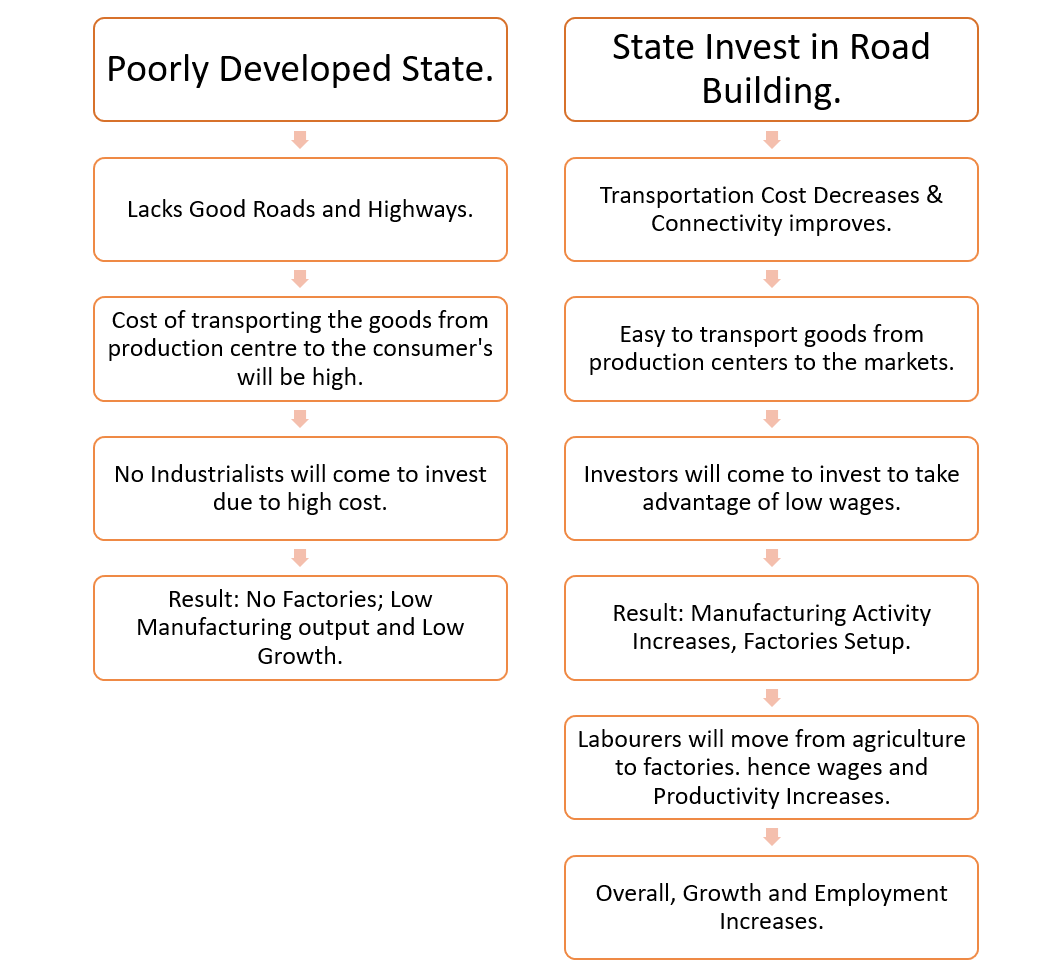 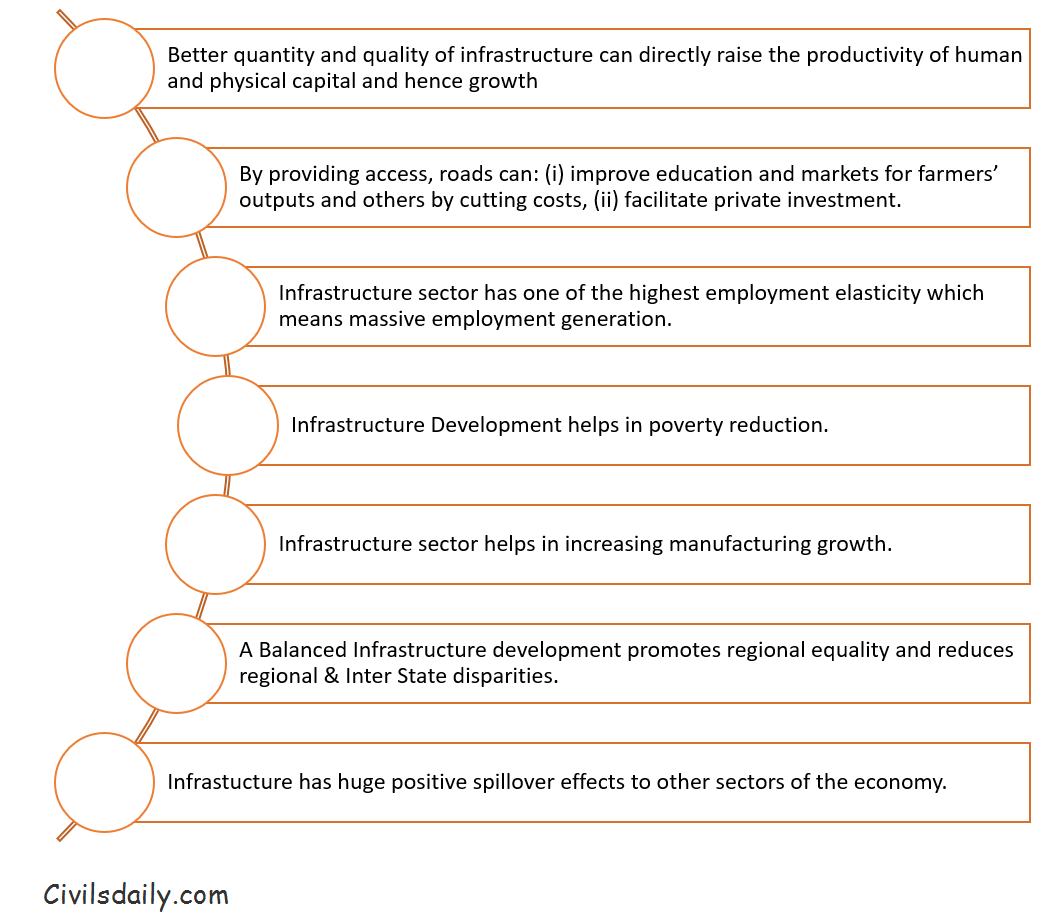 Any modern textbook on industrial economics or industrial organization will point out that for industries that enjoy network externalities (positive spill over effects/benefits to other sectors/industries), the social rate of return has to be higher than the private rate of return in these projects—assuming that the regulation does not allow the network externality to be turned into a private rent. In other words, their impact on GDP and its growth should be high. This explains for instance why the growth impact of the telecoms sector so often come out to be high. But for specific countries or regions, this could also be true for transport or electricity.

The importance of energy sector especially electricity in promoting growth and development via human development and physical development is well known. The single most reason obstructing the growth of the industrial sector in general and manufacturing in particular in India is deficiency of continuous power supply (electricity/electrification) to run factories.

Various studies have found out that, there exist a positive impact on energy infrastructure on the growth of an economy. Therefore, investing in the energy sector may be the safest bet to achieve a high growth. This should not be a surprise, energy is indeed an input into any of the other infrastructure subsectors—for instance, water for irrigation purpose is often pumped through the electric pumps.

The impact of telecommunication on the growth is found to be maximum. The availability of fixed line phones and mobile phone penetration have effectively transformed the Indian economy and has given boost to Businesses like BPOs and KPOs (Knowledge Processing Outsourcing).

The recent growing research on the importance of the access to internet to increase competition in the private and public sector and from increasing competition to the higher social return and growth of industries is well documented.

For developing countries like India, the estimated growth effects of transport investments have been very strong. This has been a common finding in research over the last 20 years or so. This is not surprising since the transport facilities in India are weak. The main impact of improved transportation facilities on the development has to come from quality, from addressing bottlenecks or from capturing new network or suprational effects which have not been internalized in older designs of the transport networks.

In fact, studies have found, that for most of the developing countries, the construction of Roads, Railways, Highways, Airports and Sea Ports have contributed positively towards increasing growth.

For instance, roads are needed in Africa, if Africa wanted to match the growth rate of the rest of the world. Construction of Roads & Highways are essential to reduce differences across regions in India. Ports are needed in India, if India, wants to increase its exports and become a major player in the Global Economy.

Hlo team,please update gs3 notes for 2020-2021,because it is very difficult economics for scince background students .I will very thankful to ur team and efforts .please