Vulnerable groups are those groups of society which would be susceptible under any unfavourable situations such as where the adults are not capable to provide a satisfactory living for the household due to health issues like disability, illness, age or some other characteristic, and groups whose resource endowment is poor to provide sufficient income from any available source. In India, there are numerous socio-economic difficulties that members of particular groups experience which limits their access to health and healthcare.

For government, it is not an easy task to identify the vulnerable groups. Besides there are multiple and complex factors of vulnerability with different layers and more often than once it cannot be analysed in isolation. There are several conspicuous factors on the basis of which individuals or members of groups are differentiated in India, i.e., structural factors, age, disability and discrimination that act as barriers to health and healthcare.

The vulnerable groups that face impartiality include, Women, Scheduled Castes (SC), Scheduled Tribes (ST), Children, Aged, Disabled, Poor migrants, People living with HIV/AIDS and Sexual Minorities. Sometimes, each group faces many obstacles due to their multiple individualities. For example, in a patriarchal civilisation, disabled women have to face double discrimination of being a women and being disabled.

There is caste system in India since ancient times and therefore sudras have been browbeaten for the ages. In earlier period, they were deprived of the right to education and thus were left suffering behind, socially and economically. Such people have been categorized into Scheduled Castes. Tribal communities, who never mixed with the main society, are similarly challenged and are categorized into Scheduled Tribes.

Further, the President can, under Article 340, can establish a commission to scrutinise the condition of socially and educationally backward classes. Structural standards are attached to the different relationships between the subordinate and the prevailing group in every society. The norms act as structural obstacles giving rise to various forms of disparity.

In India, early marriage and childbearing affects women’s health unfavourably. About 28% of girls in India get married below the legal age and experience pregnancy (Reproductive And Child Health – District level Household Survey 2002-04, August 2006). These have serious consequences on the health of women. Reports indicated that maternal mortality is at rising trend in India. The average maternal mortality ratio at the national level is 540 deaths per 100,000 live births (National Family Health Survey-2, 2000). It varies between states and regions, i.e., rural-urban. In most cases the deaths occur from avoidable causes. Huge percentages of women are reported to have received no antenatal care.

In India, institutional delivery is lowest among women from the lower economic class as against those from the higher class. It has been documented in reports that major proportion of the lower castes and Dalits are still dependent on business and upper class for their living. Dalits does not refer to a caste but suggests a group who are in a state of subjugation, social disability and who are helpless and poor. Earlier, they were called as ‘untouchables’ mainly due to their low jobs i.e., cobbler, scavenger, sweeper.

In a caste-dominated country such as India, Dalits who comprises more than one-sixth of the Indian population, stand as a community whose human rights have been sternly dishonoured. Literacy rates among Dalits are very low, about 24 per cent. Their living conditions are very poor or have low access to resources and entitlements. In rural India, they are landless poor agricultural labourers attached to rich landowners from generations or poor casual labourers doing all kinds of available work.

In the metropolitan, they get low level job as wage labourers at several work sites, beggars, vendors, small service providers, domestic help, etc. They live in slums and other temporary shelters without any kind of social security.

The members of these groups face systemic violence in the form of disavowal of access to land, good housing, education and employment. Structural discrimination against these groups occurs in the form of physical, psychological, emotional and cultural abuse which receives legitimacy from the social structure and the social system. Physical separation of their settlements is common in the villages forcing them to live in the most unhygienic and inhabitable conditions.

All these factors affect their health status, access to healthcare, and quality of health service received. There are high rates of undernourishment reported among the downgraded groups resulting in mortality, morbidity and anaemia. Access to and utilization of healthcare among the marginalized groups is influenced by their socio-economic status within the society.

It is observed that structural discrimination unswervingly obstructs equal access to health services by way of prohibiting. The undesirable attitude of the experts towards these groups also acts as an obstacle to receiving quality services from government. A large proportion of Dalit girls drop out of primary school in spite of reservations and academic aptitude, because of poverty, humiliation, isolation or bullying by teachers and classmates and punishment for scoring good grades (National Commission Report for SC/ST, 2000).

There is a desperate need for development of the weaker sections such as the SCs, STs, and OBCs. The SCs, STs and OBCs have been forced to remain as the Weaker Sections of India, and the women confined or oppressed to be the most and multiply exploited sections of the country, for many decades. This worst situation cannot and should not continue anymore. There is a need for the Government to act to free and unshackle the weaker Sections, from the lethargies of oppression, marginalisation and backwardness. They have to be elevated to the levels of normal human beings of the world. 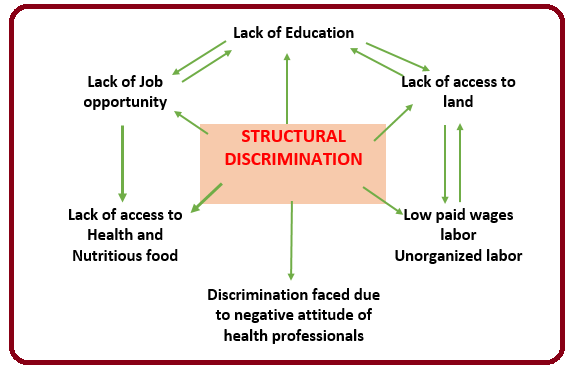 Laws for the development and betterment of vulnerable sections

Laws about vulnerable sections can be seen in two dimensions:

Constitutional Provisions for Other Backward classes

Statutory Provisions for Other Backward Classes

For detailed information on Welfare Schemes, follow the link- Govt. Schemes and Policies