The question is very basic and it would be better to draw some diagram to clear the picture. Introduction should talk about the various factors responsible for temperature and vegetation, like latitudinal factor, altitudinal factor, sun’s angle on earth and solar incidence etc.

Further, in the main body establish the relationship between temperature distribution and vegetation.  If possible bring examples as well and conclude.

Temperature and vegetation in any region of the earth are governed by multiple factors, latitude and altitude being the prominent ones. These factors can be elaborated as under:

Latitude is  one  of  the  main  factors  affecting  temperature.  With  increase  in  distance  from  the equator the amount of insolation on an area decreases due to the round shape of the earth so, not every place receives the same amount of sunlight.

Another reason  is  the  differing  angle of  solar  incidence.  This  is  the  angle  at  which  the  Sun’s  rays strike  the  Earth’s  surface.  At  the  Equator,  the  Sun’s  rays  strike  the  Earth  at  a  right  angle,  which makes  the  heat  more  intense  and  concentrated  over  a small  area.  Less  heat  is  lost  to  the atmosphere as the rays travel a shorter distance through the atmosphere.

At the poles, the Sun’s rays strike the Earth at an acute angle; this spreads the heat over a larger area.  More  heat  is  lost  to  the  atmosphere  as  the  rays  travel  a  longer  distance  through  the atmosphere. 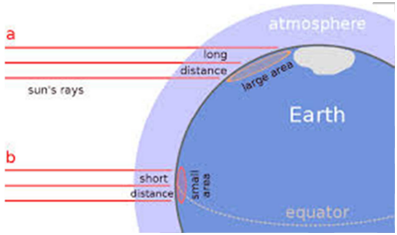 The  atmosphere  primarily  gets  heated  by  the  long  wave  radiation  that  is  emitted  by  the  earth  after absorbing solar insolation and not directly by sun’ s rays. So altitude affects temperature as lower altitude regions are closer to the source of terrestrial radiation than higher altitude.

Also, air molecules at low altitudes are crowded together and there subsequent collisions increases their kinetic  energy  and  temperature  while  at  high  altitude  less  air  molecules  are  present  in  large  volume which results into low temperature. 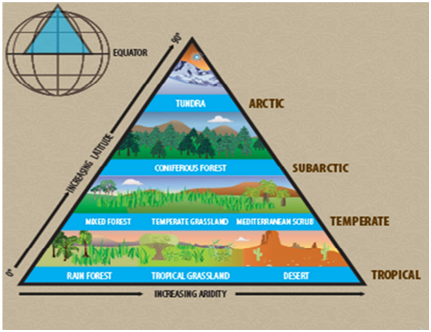 Altitude affect the type and amount of sunlight that plants receive, the amount of water that plants can absorb and the nutrients that are available in the  soil. As a result, certain plants grow very well in high elevations, whereas others can only grow in middle  or lower elevations but in general with increase in altitude the vegetation decrease. 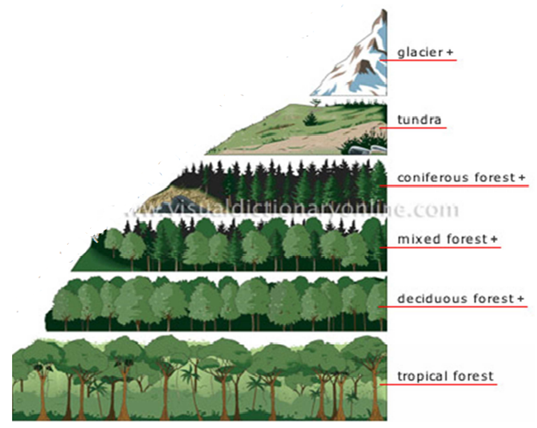 The vegetation generally decreases with the increasing altitude and the sun facing side of a mountain also has better vegetation growth.