Answer:
Rainfall in India is highly uneven over a period of time in a year. The western coasts and North East India receive rainfall of over 400 cm. It is less than 60 cms in western Rajasthan and adjoining parts of Gujarat, Haryana and Punjab. Similarly, rainfall is low in the interiors of the Deccan Plateau and east of Western Ghats. Then, Leh in Jammu and Kashmir is also an area of low precipitation.

The average annual rainfall is about 125 cm, but it has great spatial and temporal variations. 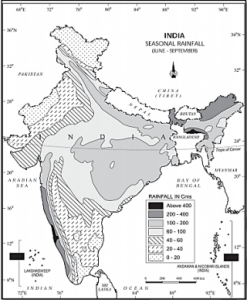 The distribution of rainfall varies temporally as per an annual cycle of seasons. The meteorologists recognise four seasons.The rainfall in these seasons varies in the following manner:
1. Cold Weather Season:
Little rainfall in some parts of India.
Some weak temperate cyclones from the Mediterranean Sea cause rainfall in north-western India, which are called Western Disturbances.
2. Hot weather season
A sudden contact between dry and moist air masses gives rise to local storms which are associated with torrential rains.
3. Southwest Monsoon season
Over 80% of the annual rainfall is received in the four rainy months of June to September.
The monsoon may burst in the first week of June in the coastal areas of Kerala, Karnataka, Goa and Maharashtra while in the interior parts of the country; it may be delayed to the first week of July.
Monsoonal rainfall is largely governed by relief or topography and rainfall has a declining trend with increasing distance from the sea.
4. Retreating Monsoon
By the end of September, the monsoon becomes weak in response to the southward march of the sun.
The weather is dry in north India but is associated with rain in the eastern part of the Peninsula.

Areas of High Rainfall (Over 200cm): Highest rainfall occurs along the mountain ranges obstructing the approaching moist winds, like the west coast, as well as in the sub-Himalayan areas in the northeast
Areas of medium Rainfall (100-200 cm): In the southern parts of Gujarat, east Tamil Nadu, north-eastern Peninsula covering Orissa, Jharkhand, Bihar, eastern Madhya Pradesh, northern Ganga plain along the sub-Himalayas and the Cachar Valley.
Areas of low Rainfall (50-100 cm): Most of the regions having the effect of continentality like Western Uttar Pradesh, Delhi, Haryana, Punjab, Jammu and Kashmir, eastern Rajasthan, Gujarat and Deccan Plateau.
Areas of inadequate Rainfall (Less than 50 cm): These are arid regions lying in the interior parts of the Peninsula, especially in Andhra Pradesh, Karnataka and Maharashtra, Ladakh and most of western Rajasthan.
In the north India, rainfall decreases westwards and in Peninsular India, except Tamil Nadu, it decreases eastward.

Changing pattern of rainfall in India:
There is a general consensus that monsoon pattern in India is changing in terms of intensity, duration, frequency and spatial distribution:
Rainfall extremes have increased threefold over the last few years.
The frequency of floods in northwest and the northeast while rainfall deficit in south has increased.
The onset of the monsoon has been delayed due to a regime shift in climate i.e. from a weak to a strong El Niño period.
Monsoons have also been ending sooner thereby reducing the length of the rainy season.
Monsoon seasons are witnessing random ‘break periods’ when there is little to no rainfall.
Though it’s difficult to attribute exact reasons for changing pattern, the following factors have affected the

Monsoon pattern:
The ripple effects of global warming and climate change
Frequent El-Nino and La-Nina, the Indian Ocean Dipole and the Atlantic Nino
Break periods are associated with rainfall systems moving northwards from the equatorial region.
The high rate of deforestation

Thus it becomes imperative for India to work towards restoring the balance of nature in collaboration with other countries, so that the monsoon pattern doesn’t change permanently.

Hi Ashraf
Make your handwriting clearer.
The content of the answer is good.
Structure is according to the demand of the question.
Good use of diagram but its better of you would have made diagram depicting Spatial Distribution of the rainfall in India.
All in all well attempted.
Work on your presentation.

Hi Sourav
Good use of diagram but pointers in it are wrong. Use this instead: Areas of High Rainfall (Over 200 cm); Areas of medium Rainfall (100-200 cm); Areas of low Rainfall (50-100 cm): and Areas of inadequate Rainfall (Less than 50 cm).
The first part needs more content and dimension.
You have to discuss in depth about “Spatial” as well as “Temporal” distribution of rainfall.
The answer lacks proper discussion about it.
Good 2nd part. It is well explained and detailed.
Read the model answer for the balance of the answer.

Hi Vishwanath
Lengthy answer.
It is taking 4 pages.
To avoid overshooting length in geo and IR related questions, use diagram, like we did in the model answer.
The content is good but over explained n certain parts.
Structure is perfect.

Hi Sahithya
Very good answer.
The structure, presentation, content and explanation, all are well placed.
The language is short and crisp.
Keep writing like this.
In geo and IR related questions, use diagram, like we did in the model answer.

Hi Avani
The answer is ok in terms of structure but lacks content overall.
Your discussion in both parts needs more discussion and explanation, specially in the 1st part.
You have to discuss more about spatial and temporal variations.
Read the model answer.