Farm size can be assessed in many ways such as by mapping land area, value of output, value of sales or profits etc. However, productivity on farm depends on many factors like quality input, labour, modern method, scientific management etc. With study in recent years it has been witnessed that small farmers with small land holdings are able to produce more in comparison to large farm sized farmers.

The reasons for increased production from small landholdings:

Since, the advent of modern method of farming, the landowners are now able to grow more in big or small farms both. Later, the progressive and commercial farmers started to employ more modern technology hence increasing output in comparison to small land holders.

Hence, we can say that the relationship of farm and output depends on the types of input and timing. The productivity also depends on effective utilization of resources.

However, despite increased productivity ensuring food security for the country through their hard work has not meant greater income and prosperity for the farmers. There are several possible solutions being discussed in the policy circles as how to increase the income of farmers.

In this regard, there are three fundamental sutras for a farmer’s prosperity:

Many studies belied the general assumption that farm size and productivity have an inverse relationship. This is because, in past using the same technology as employed on the large farms, the smallholder was more productive because of his greater labour input. Hence said that, there is inverse relationship between farm size and productivity.
Later progressive and commercial farmers started to employ a higher level of technology. The small farmer was unable to compete the new technological inputs required investments that went beyond his capacity. Therefore, we cannot state that there is inverse relationship between productivity and farm size. The productivity is also dependent on the effective utilization of the resources.
There are instances where despite of small farm sizes, with the better quality inputs, hard work, scientific management, production and productivity has gone up. This results only when the small and marginal farmers are made accessible to present day technologies and facilities.
Important determinants or factors to increase farmers income:
However, ensuring food security for the country through their hard work and increased production has not meant greater income and prosperity for the farmers.

Three fundamental sutras for a farmer’s prosperity
Reduction in cost of cultivation,
increase in productivity and production, and
remunerative price for produce

1. Price of seeds:
Farmers go for hybrid seeds as these give better yield than the open-pollinated varieties. But the price of hybrid seeds is very much high.
Either scientists have to develop open pollinated varieties with better yields or the price of hybrid seed should bring down.
2. Hybrid varieties developed through public-funded research should be available to the public sector institutions without paying any amount on a non-exclusive basis.
Scientists should continue doing high-end research but for the public sector without accepting royalty from public sector units to make the fruits of science available to the farmers at a reasonable and affordable price.
3. Access to formal credit should be made available to all farmers
Many farmers depend up on informal sectors for credit, which lead to usurious rates and fettering conditions. Therefore, government should provide formal credit to all the farmers at low interest rates.
4. Remunerative price for produce
Many farmers are unhappy with the remunerative prices for the production. Farmers are not getting minimum price and eventually they are unable to pay debts. This is also a reason for suicides of the farmers. The government should bring some stringent policies to satisfy the marginal farmers.
5. Allowing the leasing of land
Allowing the leasing of land will help find out the real tiller of land and it will be possible to extend the benefits of various schemes to the real cultivator rather than the landowner.

Hi Divya,
-Ideas and points brought are good, but it became too lengthy discussion…it seems you have copied pasted the points…It’s almost like an article and certainly not the answer…
Expertise lies when all these would have been written within word limit given… speaking about wider ideas in limited word is the ability of writing answer…

Though, nice attempt…your effort is appreciable, just need to sync the ideas with sentence articulation, the rest is good and well written…
Keep writing, will improve for sure… 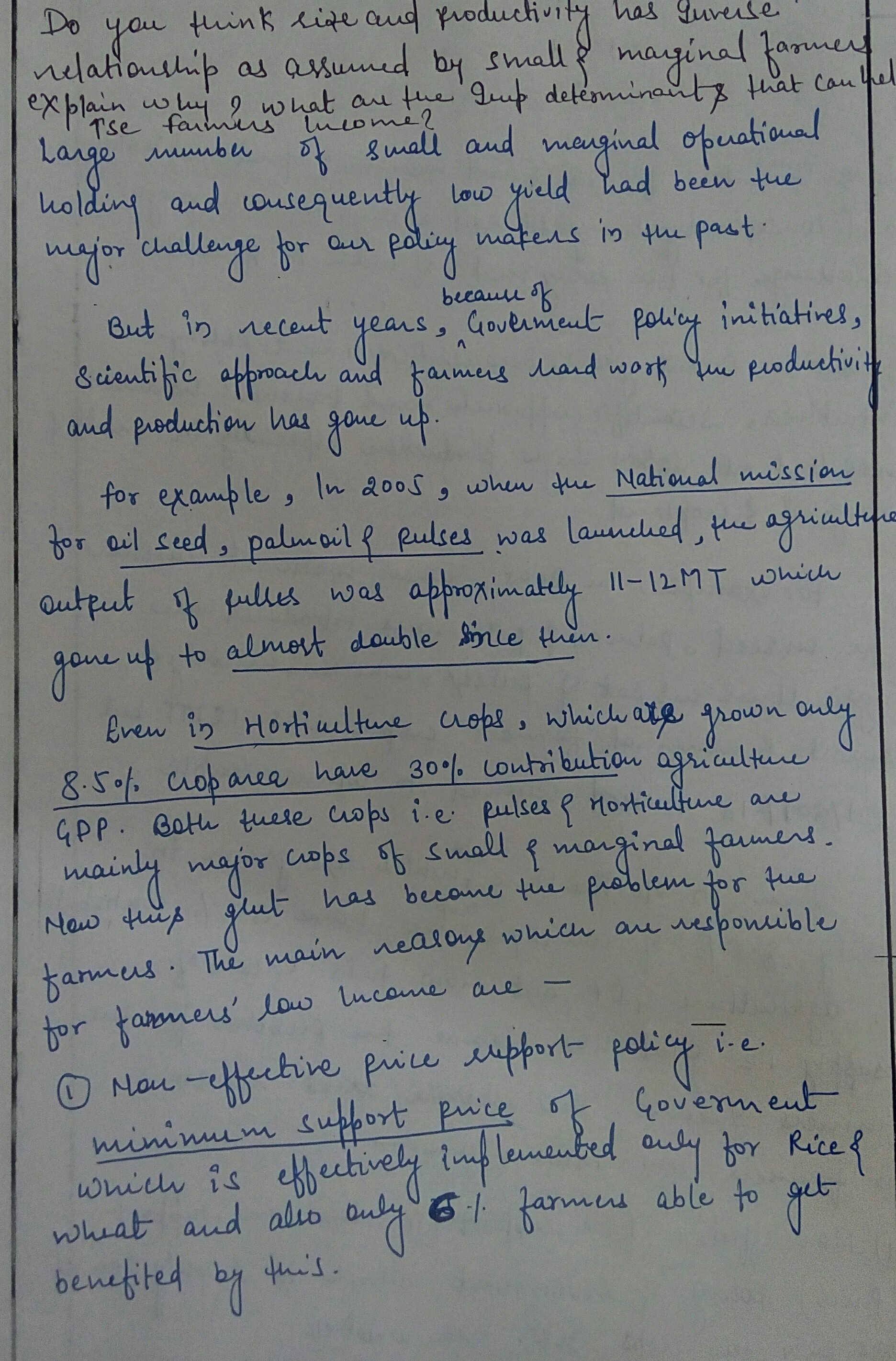 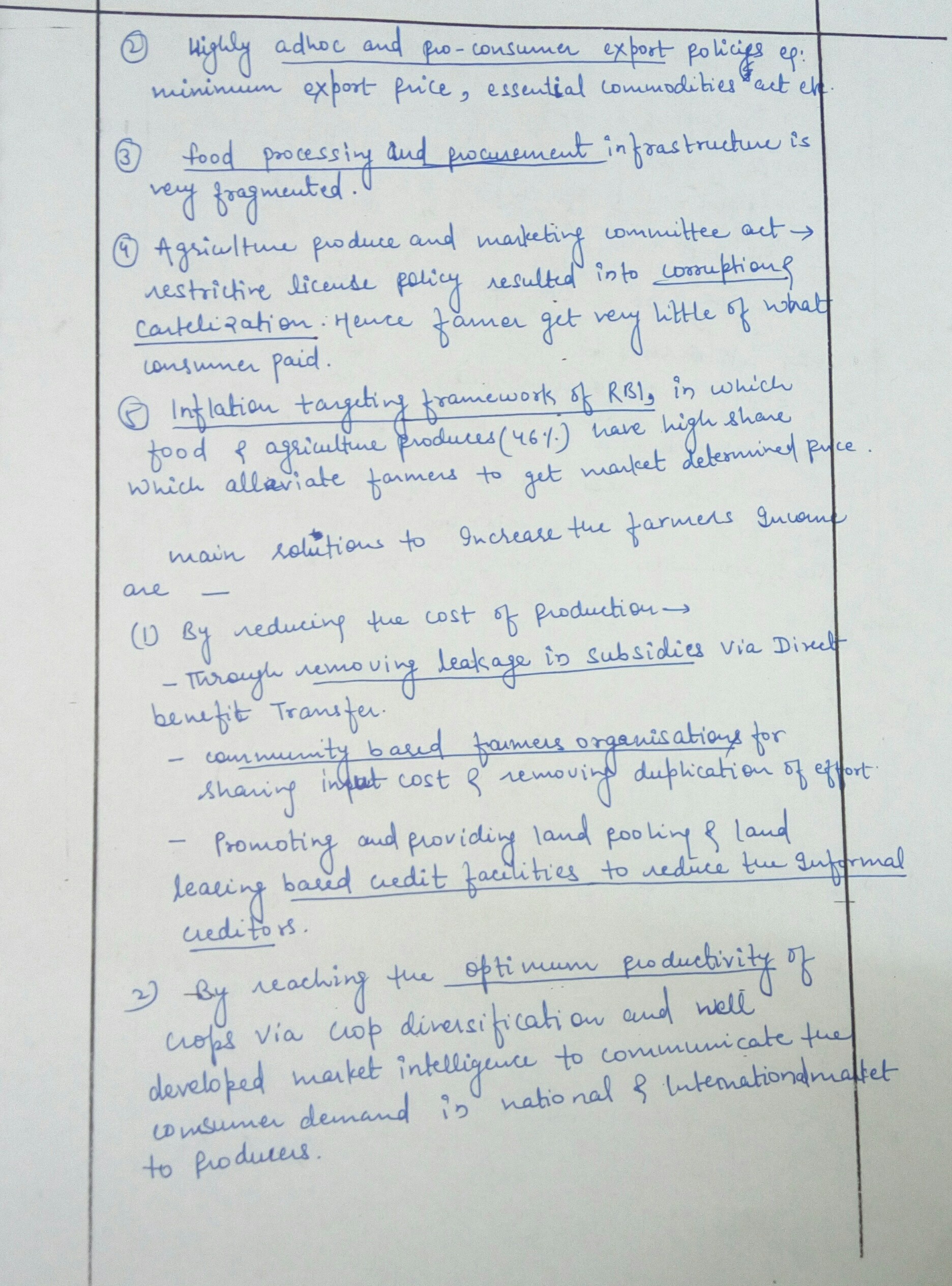 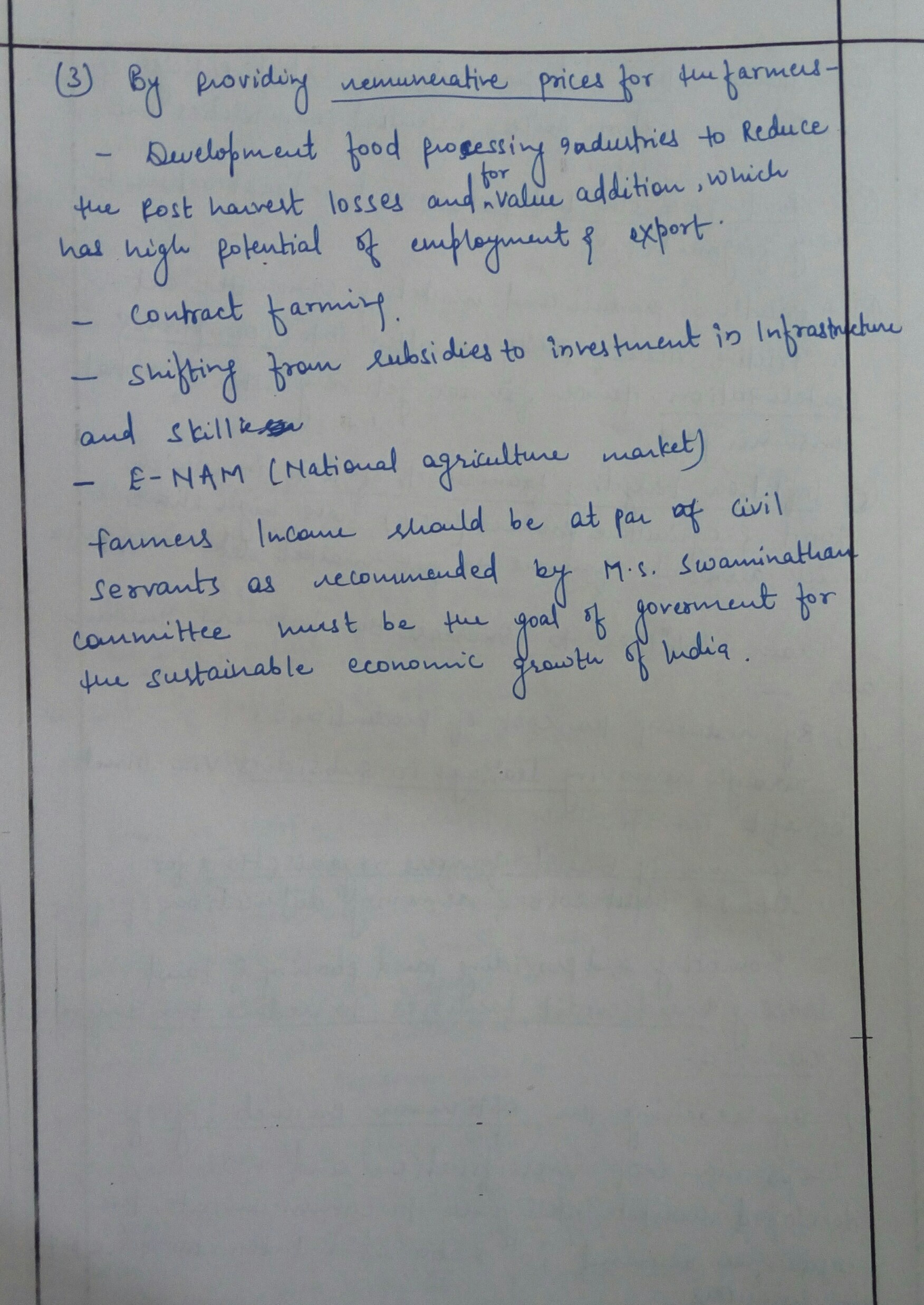 Hi Anshika,
-Your ideas in first part seems okay…but there is nothing mentioned about inverse relationship…For example: It has been witnessed that small farmers with small landholdings are able to produce more with little investment. This is because of their increased labourship, limited investment, effective monitoring and control etc.
-The rest of the points are good…
-Though, conclusion could have been much better…
-Overall, good approach….well attempted…just need to focus on question and address the aspects asked…
Keep writing…