Here we need to establish the link between global pressure belts (determines wind belts) and different climatic regions across the world. Introduction should talk about global pressure belt and the wind system. It would be more better if shown with diagram followed by description of features mentioned in diagram.

Pressure belts shifts northwards and southwards in response to the migration of sun hence forming some important climatic features of the regions. In the main body mention about the various pressure belts. For example: hot wet equatorial climate, the tropical monsoon climate, the savannah climate, desert climate in the mid latitude, the cool temperate continental climate and so on. Also mention the features of such climatic regions and conclude.

Global pressure belts are permanent geo-climatic features on earth produced by the differential heating of its surface. 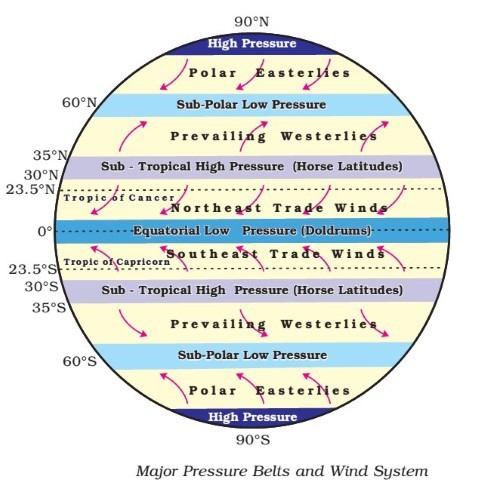 The  hot-wet  equatorial  climate: This  region  coincides  with  the  equatorial  low  pressure  belt.  The condition of low pressure due to high heat results in heavy precipitation and constantly high relative humidity. Hence this climate region supports luxuriant type of vegetation.

The  tropical  monsoon  climate:  The  shifting  of  pressure  and  wind  belts  produces  a  unique phenomenon  of monsoons  in  some  regions  between  two  tropics.  This  seasonal  shift  in winds  and consequent  precipitation  results  in  south-west  monsoon  and  north-east  monsoon  in  summer  and winters respectively.

The  savannah  climate: This  region  is  confined  within  tropics  in  interior of  the  continents.  The prevailing winds of the region, trade winds loose the moisture when it reaches there and create the unique climate of savannah characterized by grasslands.

The warm-temperate Mediterranean climate: This climatic region is confined to the western portion of the continental masses below the high pressure belt that hovers above the region between 30o and 45o north and south of the equator. The shifting of these belts produces rainy winters and dry summers as the region comes under influence of moisture laden westerlies and dry trade winds in winters and summers respectively.

The cool temperate western margin: These regions remained permanent influence of westerlies that blow from sub-tropical high pressure belt to sub-polar low pressure belt. As a result the precipitation occurs throughout the year.

The cool temperate continental climate: it is found in the interiors of the continent mainly in the northern hemisphere  under  sub-polar  low  pressure  belts.  Hence  the  rainfall  is  well  distributed throughout the year though it is low due to continental influence.

The cool temperate eastern margin: this region comes under influence of westerlies that blow out from the continental interiors; hence the winter iscold and dry while summers are wet.

The polar  climate:  this  climate  is  found  in  north of the  Arctic  Circle in  the  northern  hemisphere. Prevalence  of  anti  cyclonic  condition  due  to  high  pressure  above  results  in  very  low  precipitation mainly in form of snow.

i purchased this product