National Income Accounting refers to the practice of calculating the output of an economy. It helps in assessing how the economy is doing. Some of the most standard identities used are GDP, GNP, National Income, etc. We will be studying those in detail once we cover the basics.

Since GDP is the most important identity and all other identities are derived from it, we will cover it first.

Gross Domestic Product (GDP) is the monetary value of all the finished goods and services produced within a ‘domestic territory’ in a specific time period. As evident, it is tied to a specific territory – a country’s border irrespective of the person producing it. That person could be a citizen or a foreign national.

Let’s take a hypothetical economy that produces 10 cars. The manufacturer purchases all components like tyres, glass, etc for Rs. 40, pays rent for Rs. 30 and pays labor for Rs. 10. Finally, sells the car for Rs. 100.

The GDP for this economy will be 10X100 = 1000. We didn’t include the cost of components like tyres, glass, etc because they were not final goods in themselves. They were consumed in the manufacturing of cars.

(i) Territory lying within the political frontiers, including territorial waters of the country.

(ii) Ships and aircrafts operated by the residents of the country between two or more countries.

Value Added Method: The sum of the value of all final goods and services produced.

Let’s suppose there are only kind of production process taking place in the economy. they are the farmers growing grapes and wine producer. The farmer need only human labour to grow grapes. The farmers sell a part of the produced grapes to the wine manufacturers. The manufacturer uses grapes as inputs to produce wine.

What will be the total value added in this entire process?

The farmer grows grapes of Rs 1000 which will be added to total value added since that’s the final output produced by the farmers.

The baker used grapes worth Rs 500 as an input to produce wine worth of Rs 1500. The input used by the baker must be subtracted from the final output of wine produced by him (1500-500=1000). The reason for the deduction is that, we have already included the value of grapes produced by the farmer in the value added. If we now again include this in calculating value added we commit the mistake of Double counting- counting a product twice while calculating final output.

The raw materials that a firm buys from another firm which are completely used up in the process of production are called ‘intermediate goods’. Therefore,

The value added of a firm = Value of production of the firm – Value of intermediate goods used by the firm.

The value added of a firm is distributed among its four factors of production, namely, labour, capital, entrepreneurship and land. Therefore wages, interest, profits and rents paid out by the firm must add up to the value added of the firm.

Income Method: The sum of all incomes accruing to factors of production, i.e., Rent, Interest, Profit and Wages.

The sum of final expenditures in the economy must be equal to the incomes received by all the factors of production taken together (final expenditure is the spending on final goods, it does not include spending on intermediate goods). This follows from the simple idea that the revenues earned by all the firms put together must be distributed among the factors of production as salaries, wages, profits, interest earnings and rents.

Expenditure Method: The sum of consumer’s expenditure, net investment, and government expenditure on goods and services.

I, Investment expenditure incurred by firms on capital goods

G, expenditure incurred by government on the purchase of final goods and services produced by the firms

X, Exports revenues earned by firms by selling its goods and services abroad

Circular Flow of Money and Methods of Calculating National Income

We will discuss a simple economic model depicting how money flows through the economy. 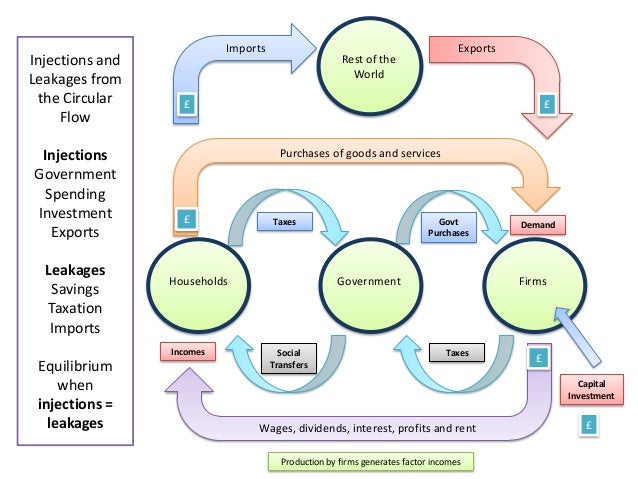 Money changes hand from one sector to another.

Companies/Firms use 4 kinds of inputs that are used in the production of goods and services in order to make an economic profit. These 4 inputs are land, labor, capital, and entrepreneurship and are known as factors of productions.

Thus, we see, that money flows from business firms to households and then it flows from Household to firms. This money flow is called circular flow of income.

Saving and Investment in the Circular Flow

Along with consumption, the households also save(S) part of their money.
When Households save, their expenditure on purchase of goods and services decline. The decline in the purchase will result in a decline in money received by firms. This will result in less money flow to the household as the firms will reduce hiring and production operations. Thus, saving act as a leakage from the economic system.
But the important question to ask is, where will savings go in the economy?
The savings in the economy does not lead to any reduction in aggregate spending and income as the savings flows back into the economic system through Financial Markets (Banks, Stock markets, insurance etc.)
From Financial Markets, the savings flows back to the Business firms who borrow them and invest it into new forms of investments.
Thus, the saving which is a leakage in the system also flows back into the system through investment by a firm which acts as injections.

Government Sector in the Circular Flow

Because the money circulates, it leads to the following methods of GDP calculations.

The sum of income received by all the factors of production taken together is same as the value of final goods produced.

Either they consume it, or they save it, or pay taxes with it. This leads to the formulae.

The Product or Value Added Method

When we consider an actual economy, the Value Added Method is used but things get more complicated.

First, the concept of factor cost, basic prices, and market prices is introduced.

Factor cost refers to the sum of the factor costs incurred during the process of production of final goods and services by the producer.

Market prices refer to the amount receivable by the producer from the purchaser for a unit of a good or service produced as output minus any tax payable. We get this price by adding Net Product Taxes(Product taxes – Product subsidies)

This is how it translates –

Second, we come to the concept of constant prices and current prices.

We need to measure GDP by discounting the effect of inflation in the economy to arrive at real numbers of how the growth has been. When our reference year is a base year, we call it GPD at constant prices while this year’s GDP is referred to as GDP at current prices. Recently, the base year was updated to 2011-12.

Change in methodology of calculating GDP

India’s Central Statistical Office (CSO) introduced the new series of National Accounts Statistics (NAS) with the base year 2011-12, replacing the earlier series with 2004-05 as the base year. This is a routine matter for the CSO – as with statistical offices of most countries – to change the base year of the NAS periodically to account for structural changes in the economy, relative prices, and to replace older survey data with newer ones to better capture the economic activities. This time around the revision also had another objective, that is, to update the underlying methodology of NAS to the most recent international guidelines, namely, the UN System of National Accounts, 2008 (SNA 2008).

The following changes were made by the CSO while calculating GDP:

Replacing GDP at factor cost and GDP at market price with gross value added at basic prices and GDP respectively.

Further, the GDP structure is also different now. While the public sector share in GDP remains unchanged, the share of private sector corporates is higher in new series by some 11 percent and the share of unorganised sector declined from 56 to 44 percent. 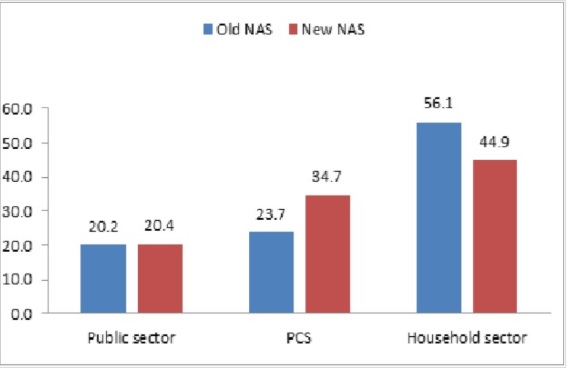 Historically, the private corporate sector was small. However, since the last three decades there is a phenomenon growth in the number of registered companies ranging from services to financial sector. But their contribution to the Indian economy is mostly unknown as they mostly don not files their returns and audited balance sheets with Registrar of Companies. Similarly, unorganised sector is vastly underestimated in the new series.

The new series, in a first, has estimated PCS’s GDP directly using company balance sheets obtained from Ministry of Corporate Affair’s (MCA) new database of about 500,000 companies for just two years (2011-12 and 2012-13).

The new methodology seems to have particularly affected the manufacturing sector estimates. The sector’s share in GDP has risen to 17-18 per cent, from 14-15 per cent earlier; its growth rate is systematically diverging from that based on both IIP and ASI

The Central Statistics Office brings a document on QUARTERLY ESTIMATES OF
GROSS DOMESTIC PRODUCT. Though such level of detail is not required from an exam perspective, its good for conceptual clarity.

A sample can be seen here.

Statement 1 is as follows – 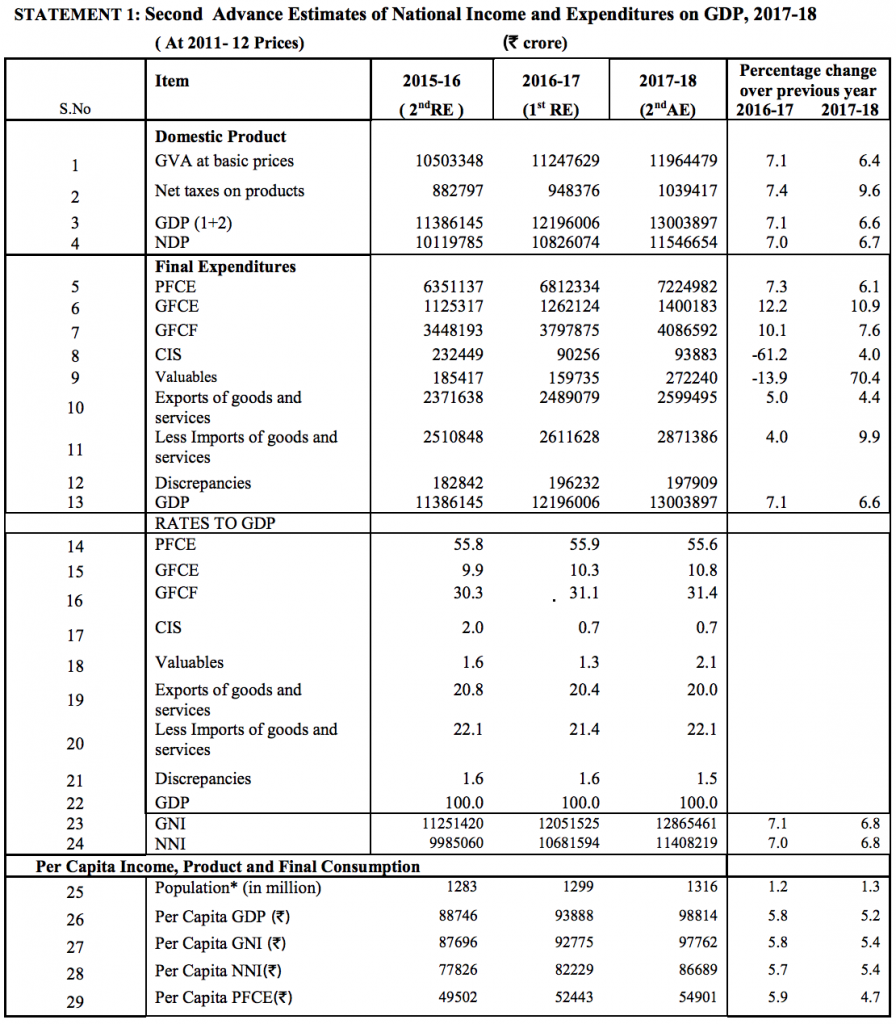 In the following chart, you can see sectors growth. 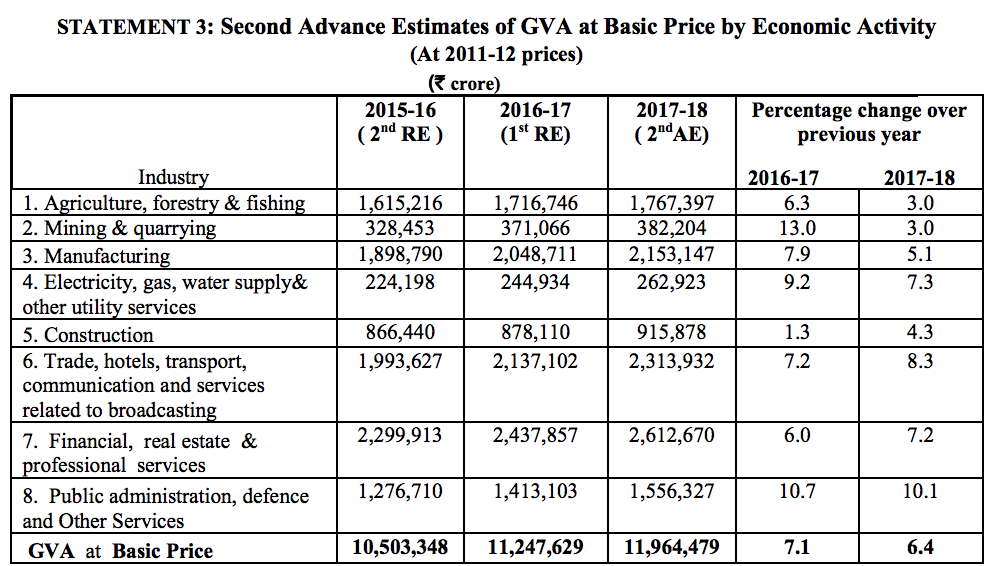 The Economic Survey also comes out with interesting trends on GDP.