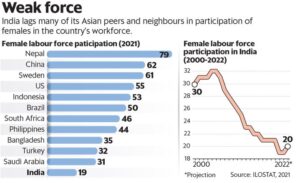 Fewer than one in five Indian women are in the labour force. Four out of five are neither working nor looking for work.

Why women’s LFPR is so low in India?

Why enhancing women’s LFPR is critical?

What is needed to improve women’s employment?

What obstacles do we confront?

What happens if we don’t act?