Tax avoidance is the use of legal methods to minimize the amount of income tax owed by an individual or a business. This is generally accomplished by claiming as many deductions and credits as is allowable. It may also be achieved by prioritizing investments that have tax advantages, such as buying municipal bonds.

First, let’s understand why Mauritius is favourite among investors?

The story of Tiger Global’s investment into Flipkart

And the case begins.

1. Focus on transaction, not on the entity that involved in the transaction

But wait… what about the past judgements?

3. Flipkart is a Singaporean company. So, pay the taxes! 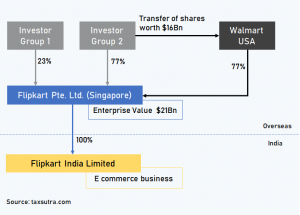 Consider the question “Examine the basis used by the Authority for Advance Rulings (AAR) that led it to rule in favour of tax authorities.”

AAR concluded that there was no doubt that Tiger Global had set up the Mauritius based entity to avoid paying taxes and therefore should be liable to pay what the Income Tax authorities deem fit.

Can India tax the gains made by selling the shares of Singaporean company?

where is this news piece taken from? can’t find it in Hindu/IE/PIB etc

The copy-paste from here –
https://finshots.in/archive/tiger-globals-tax-gambit/