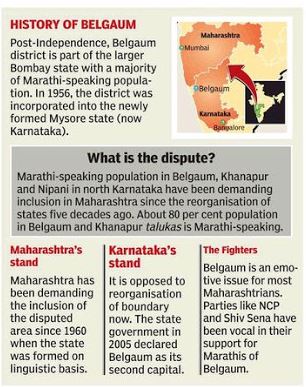 A Maharashtra leader has sparked a controversy, when he called the incorporation of Belgaum (Belagavi), Karwar and Nipani areas of Karnataka into Maharashtra, as a dream of the ruling party.

Q.The linguistic re-organization of India in the post-Independence period has prevented its balkanization, unlike our neighbourhood. Comment.

Beginning of the dispute

A case pending in the Supreme Court