The Supreme Court is looking into allegations of the metamorphosis of the Prevention of Money Laundering Act (PMLA), brought to sniff out drug money, into a potent weapon to raid rivals and deny rights.

What is meant by money laundering? 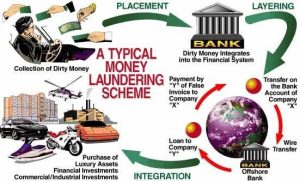 It is a 3-stage process. They are:

Some of the most Common Money Laundering Methods:

The PMLA seeks to combat money laundering in India and has three main objectives: