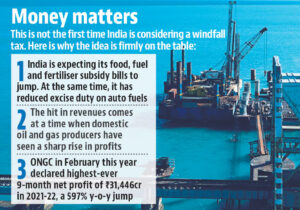 Finance Minister has defended the windfall tax imposed by the Centre on domestic crude oil producers, saying that it was not an ad hoc move but was done after full consultation with the industry.

What is a Windfall Tax?

When did India introduce this?

How is it levied?

Issues with imposing such taxes