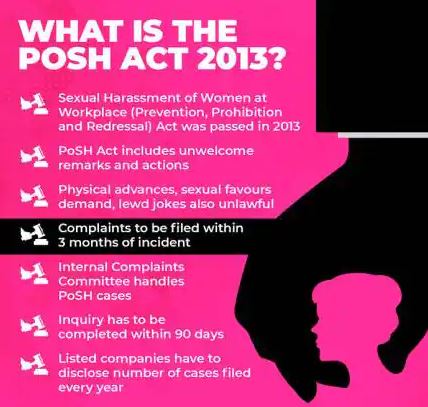 The Kerala High Court has asked organizations associated with the film industry to take steps to constitute a joint committee to deal with cases of sexual harassment of women, in line with the Sexual Harassment of Women at Workplace (Prevention, Prohibition and Redressal) Act of 2013.

What is the POSH Act?

What are Vishakha Guidelines?

Guidelines and the law

The POSH Act broadened these guidelines:

Under the 2013 law, sexual harassment includes “any one or more” of the following “unwelcome acts or behaviour” committed directly or by implication:

The Ministry of Women & Child Development has published a Handbook on Sexual Harassment of Women at Workplace with more detailed instances of behaviour that constitutes sexual harassment at the workplace. These include, broadly:

The Act mentions five circumstances that amount to sexual harassment implied or explicit:

After the ICC report

Compensation is determined based on five aspects: