Mains level : Paper 3- Factors to be considered while deciding the size of stimulus package.

The article focuses on the “fiscal space” debate in India. So, what is this debate? This debate is focuses upon the size of the fiscal deficit this year in India, ways that could be used to finance it and upper limit of this deficit etc. But the author argues that we should focus on debt/GDP trajectory in the subsequent years. Besides this, he suggests what our policy intervention comprise.

Focus on Debt/GDP trajectory, not on level 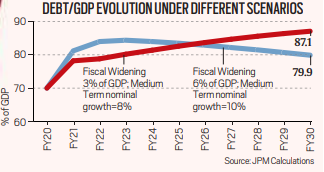 So, what could the interventions comprise?

2. Reforms in the finance sector

3. Reforms in the other sectors

4. Social infrastructure and ways to pay for it

The article is helpful to consolidate the basic understanding of the macroeconomic parameters of economy. Consider the question asked by UPSC last year “Do you agree with the view that steady GDP growth and low inflation have left the Indian economy in good shape? Give reasons in support of your arguments”

Higher potential growth is the antidote to many pressures, from incomes to jobs to debt sustainability. To the extent this unprecedented crisis creates political space and capital to reform, the opportunity must be seized.