The NITI Aayog (National Institution for Transforming India), is a think tank of the Government of India established on 1 January 2015 as a replacement for the Planning Commission to provide Governments at the central and state levels with relevant strategic, directional and technical advice across the spectrum of key elements of policy / development process (eg. special attention to marginalized sections who may be at risk of not benefitting adequately from economic progress, on technology

(eg. special attention to marginalized sections who may be at risk of not benefitting adequately from economic progress, on technology upgradation and capacity building etc.) In addition, the NITI Aayog will monitor and evaluate the implementation of programmes.

The NITI Aayog also seeks to foster better Inter-Ministry coordination and better Centre-State coordination. This is to help evolve a shared vision of national development priorities and to foster cooperative federalism, as strong states make a strong nation.

To achieve this, NITI Aayog also envisages creation of regional councils comprising of chief ministers of concerned states / central Ministries to address specific issues and contingencies impacting more than one state or region.

National and international experts, practitioners and partners are intended to be part of the NITI Aayog.

The shift to NITI Aayog was taken due to the changing economic landscape of India in the globalised world with greater role for private players, technology and evolving demographic aspirations.

Since the inception of Economic reforms of 1991, it has been argued by various renowned Economists and Policy makers (Both Inside the Government and Outside Experts) that the Planning Commission has served India well for the past 60+ years and now it needs either to be revamped or abolished all together because:

Keeping the changes in mind, the NITI Aayog has been created to replace the Planning Commission. It is also stated that the NITI Aayog will ‘facilitate a transition from the isolated conceptualization of merely ‘planning’, to ‘planning for Implementation’.

Further, NITI Aayog would also be a sounding board and offers internal consultancy services to State and Central government departments for programme design, evaluation, monitoring, capacity building, structuring of PPPs etc. However, such services would be available ‘on-demand basis’.

The NITI Aayog has the following objectives as outlined in the cabinet resolution forming it.

Like Planning Commission, NITI Aayog is chaired by the Prime Minister.

The following are the members of the current team for NITI Aayog: 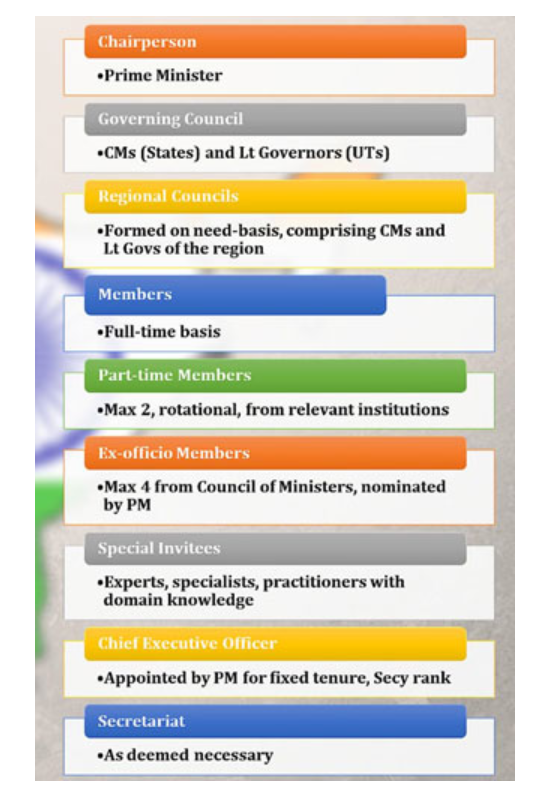