Pottery or ceramics or ceramic art refers to the creation of objects that are made up of hard brittle material produced from non-metallic minerals by moulding them while the material is wet and then firing them at high temperatures. They are often made up of clay, porcelain, steatite, etc.

Pottery plays an important role in studying culture and reconstructing the past. Historically with distinct culture, the style of pottery changed. It reflects the social, economic and environmental conditions a culture thrived in, which helps the archaeologists and historians in understanding our past. It holds significant value in understanding cultures where script was either absent or remains undeciphered. Understanding of presence of fire, cooking, storage, sedentary or migratory populace, social stratification can all be developed via studying pottery.

Pottery is majorly of two types

Handmade pottery is rather a primitive style pottery developed in early ages which with time transforms to wheel thrown. The different motifs drawn on the surface plays an important role in understanding a culture and its beliefs.

We find the first reference of pottery in this age. Naturally it is hand-made pottery but during the later period footwheel is also used. 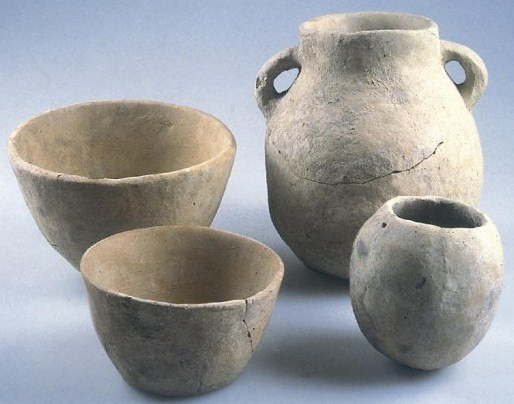 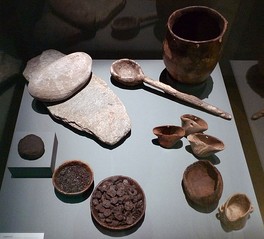 People of this age used different kinds of pottery.

Black and red ware seems to have been widely used. Cultures like Ahar-Banas showed the presence of Black and Red ware pottery with white linear designs. 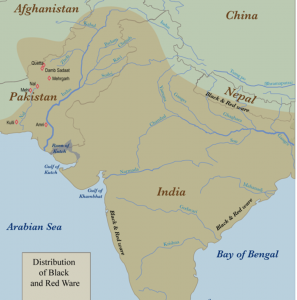 Jorwe ware is painted black-on-red and has a matt surface treated with a wash.

OCP people are regarded as the junior contemporaries of Harappa.

This pottery is identified with the Copper Hoard Culture that was found in upper Ganga Valley and Ganga Yamuna doab area. 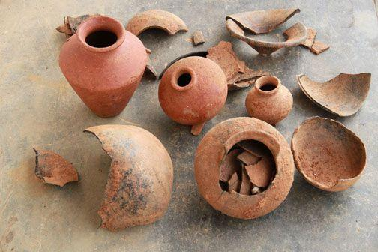 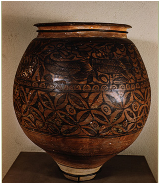 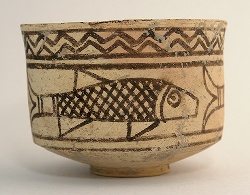 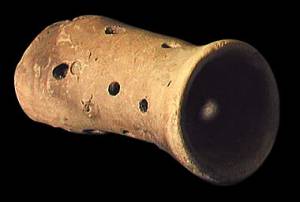 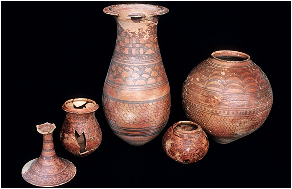 Ochre Colored Pottery (OCP) – As we know the late Harappan cultures(1900BC – 1200BC) were primarily chalcolithic. Some specific chalcolithic sites show the elements of late Harappan(like use of burnt bricks, etc). These sites have OCP.

Black-on-red painted and wheel turned pottery – Also found in Swat Valley. This shows a connection that Swat Valley was associated with Harappa.

Grey-ware and Painted Grey Ware, generally associated with Vedic people have been found in conjunction with some late Harappan pottery. It has less intricate designs as compared to the early and mature periods suggesting a dilution of the rich culture. 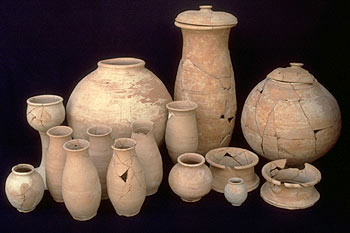 This pottery is an Iron Age pottery found in Gangetic plain and Ghaggar – Hakra valley, lasting from roughly 1200 BC – 600 BC. Mathura was the largest PGW site. 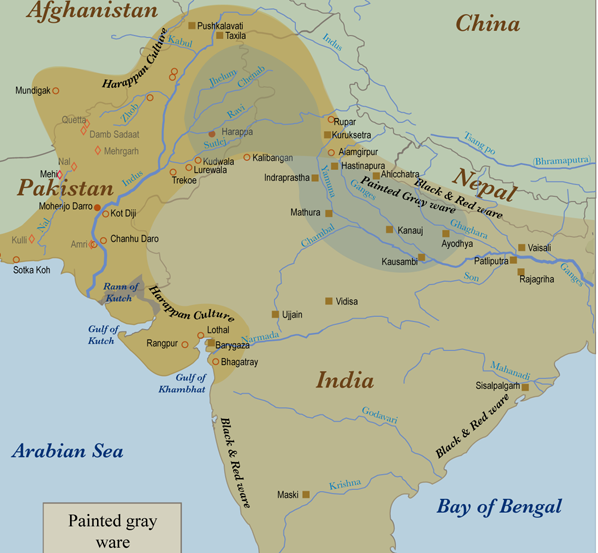 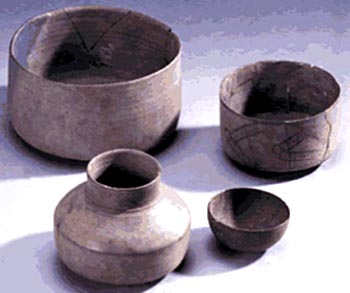 Towards the very end of Later Vedic Age around 6th century BC, we see the emergence of 2nd phase of urbanization(1st being Indus Valley Civilization). This era marked the beginning of the Northern Black Polished Ware (NBPW). 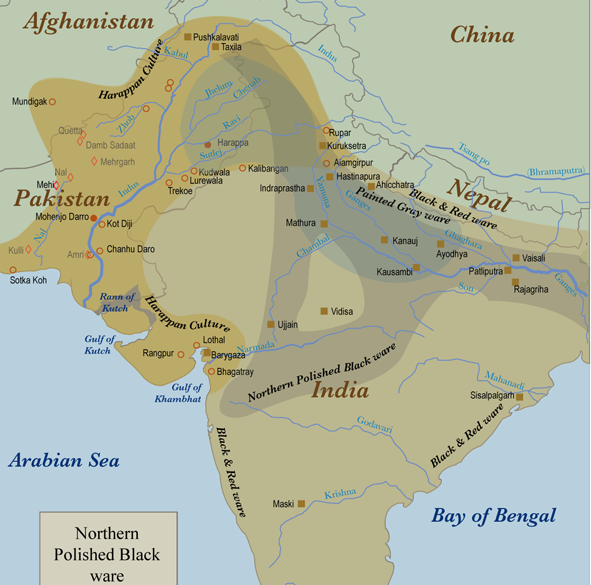 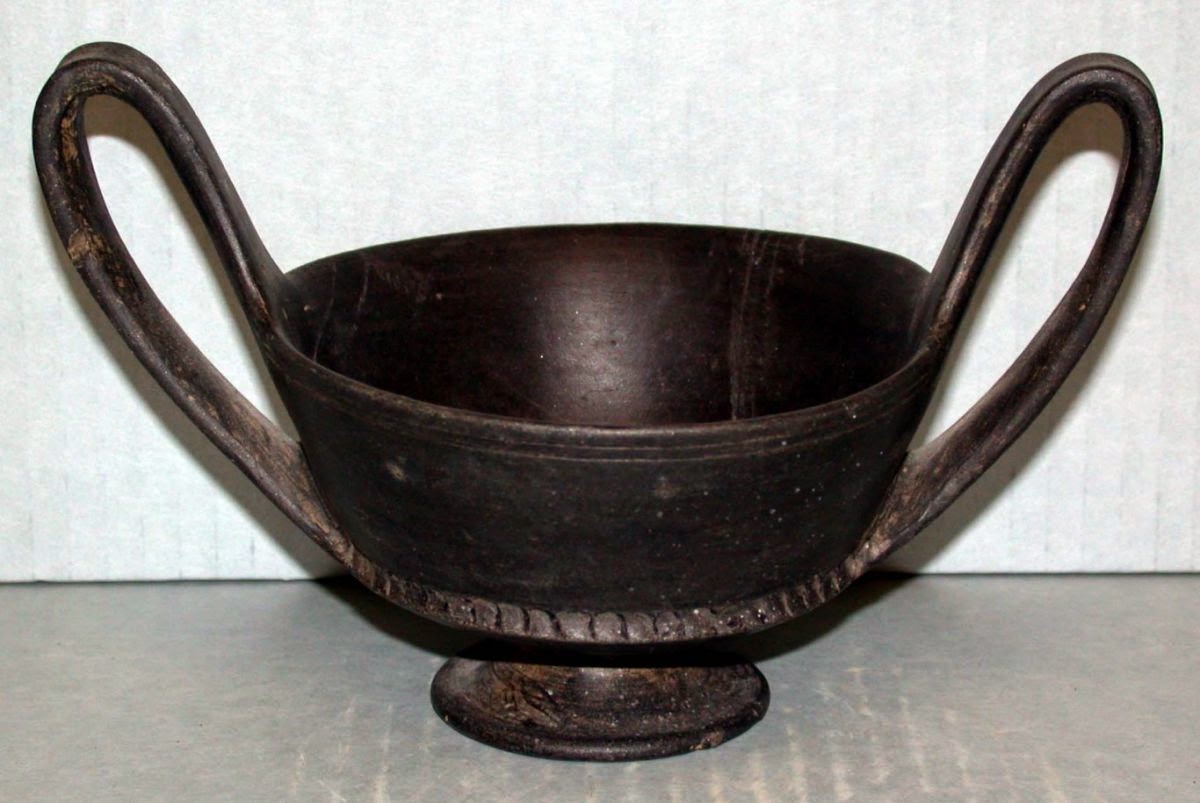 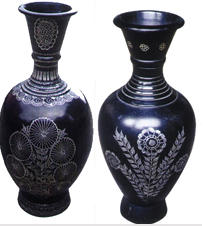 A Bichrome pottery with two colours

This culture is placed between- 3rd Century BC to 1st Century AD. Megaliths refers to monuments constructed of big (mega) stones (lith). This culture is particularly known for its large stone graves. In the South this age is characterized by the use of iron. 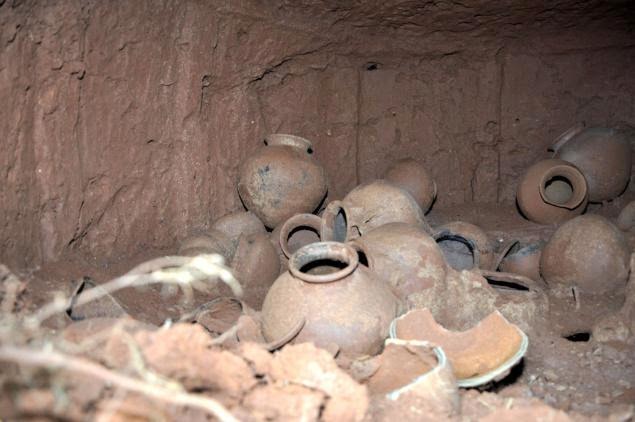