The five centuries that passed between the fall of the Mauryas and rise of the Guptas witnessed a lot of political instability and upheaval in the North of India. The South however remained fairly stable.

As the maps suggest, many kingdoms came up in North India. Despite being foreign rulers, they were assimilated in our culture and influenced it in many ways. The 3 most important among them were

They succeeded the Mauryan Empire in Magadha. Pushyamitra Sunga was the first king of this dynasty.

The Greeks were the first foreign power in the sub-continent. After Alexander left, his generals stayed back. Hence the term Indo-Greek. They brought the Greek culture. Menander(165-145 BC) was the most important king in this time. In Pali Literature he is known as Milinda.

Sakas or Scythians where nomadic Central Asian tribes who destroyed the Indo-Greek rule in north-western India. They were pushed out from Central Asia and came to India. The Sakas were divided in five branches. Around 100AD, they give rise to Kushana Empire and Western Kshatrapas.

Kanishka is the most celebrated king of Kushana empire. At its peak, his empire extended from Khotan in the northwest to Benaras in the east and Kashmir in north to Saurashtra and Malwa in the south. The capital of his empire was Purushapur i.e. modern Peshawar.

Many important works of literature happened in this era. 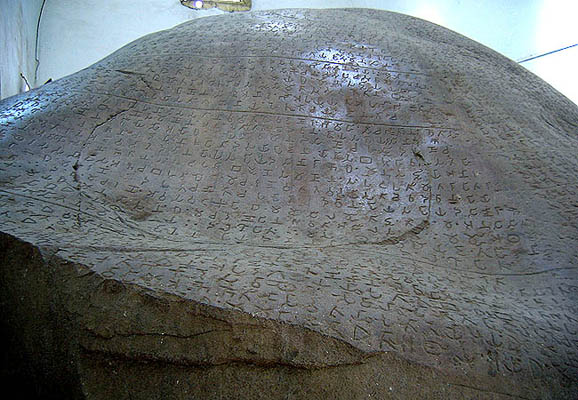 By 200BC all these 3 streams merged into one and led to the creation of Bhagvatism. By the end of late Gupta Period, it’s assimilated into Vaishnavism and was commonly referred by the latter.

Buddhism continued to receive royal patronage. Many kings of this era were Buddhists. Kanishka’s court was adorned by the presence of such scholars as Parsva, Vasumitra, Ashvaghosha, Charaka, and Nagarjuna.

A major development in Buddhism was it’s splitting up in to two sects –The Hinayana and the Mahayana. Kanishka organized the 4th Buddhist council where this split happened.

This phase also witnessed the spreading of Mahayana Buddhism to south and south east Asia.

The Sungas were great patrons of art and architecture. They contributed to the expansion of Bharut and Sanchi Stupas. 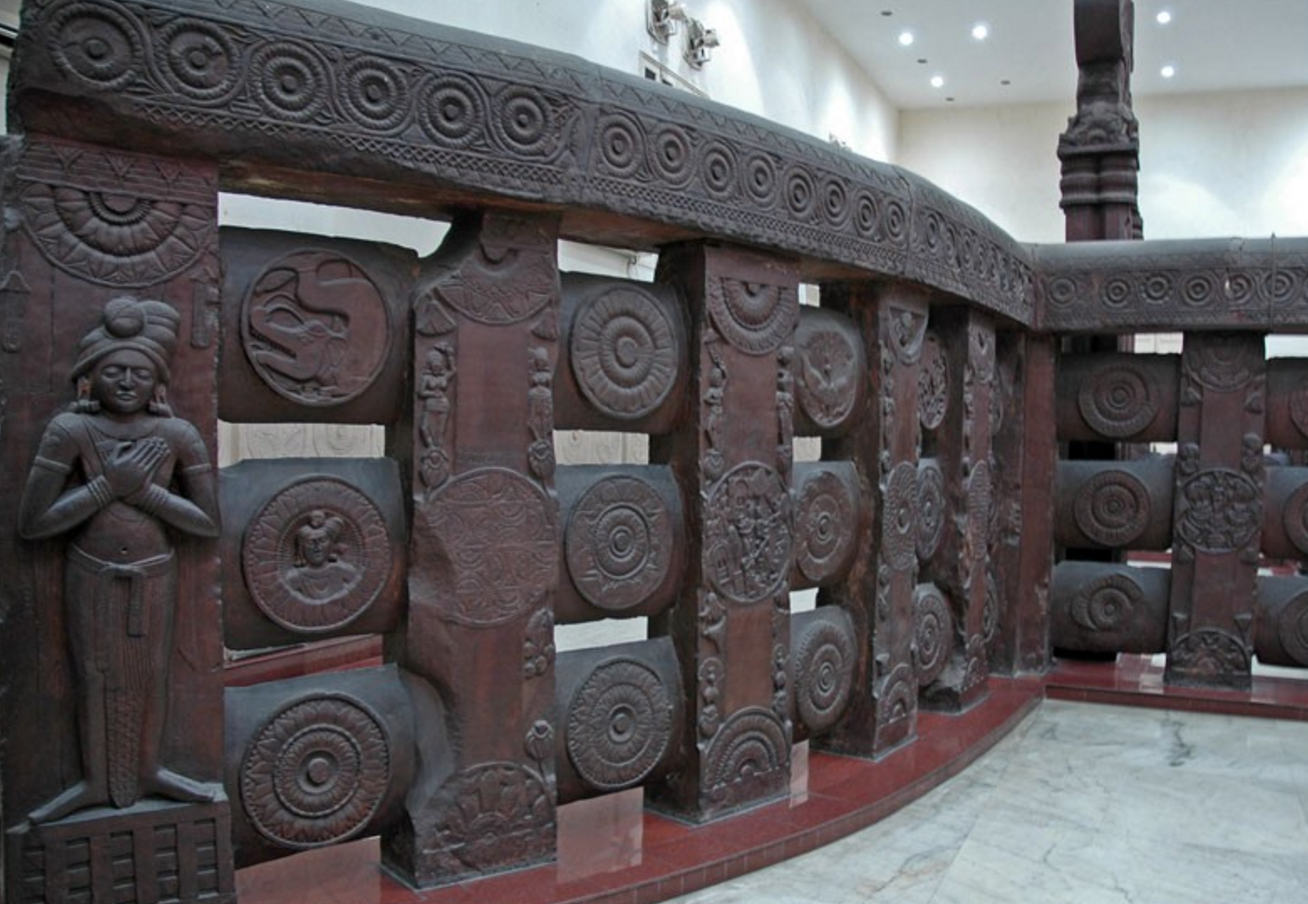 Only 1 Torana has been found but it is suspected that there would’ve been 4. 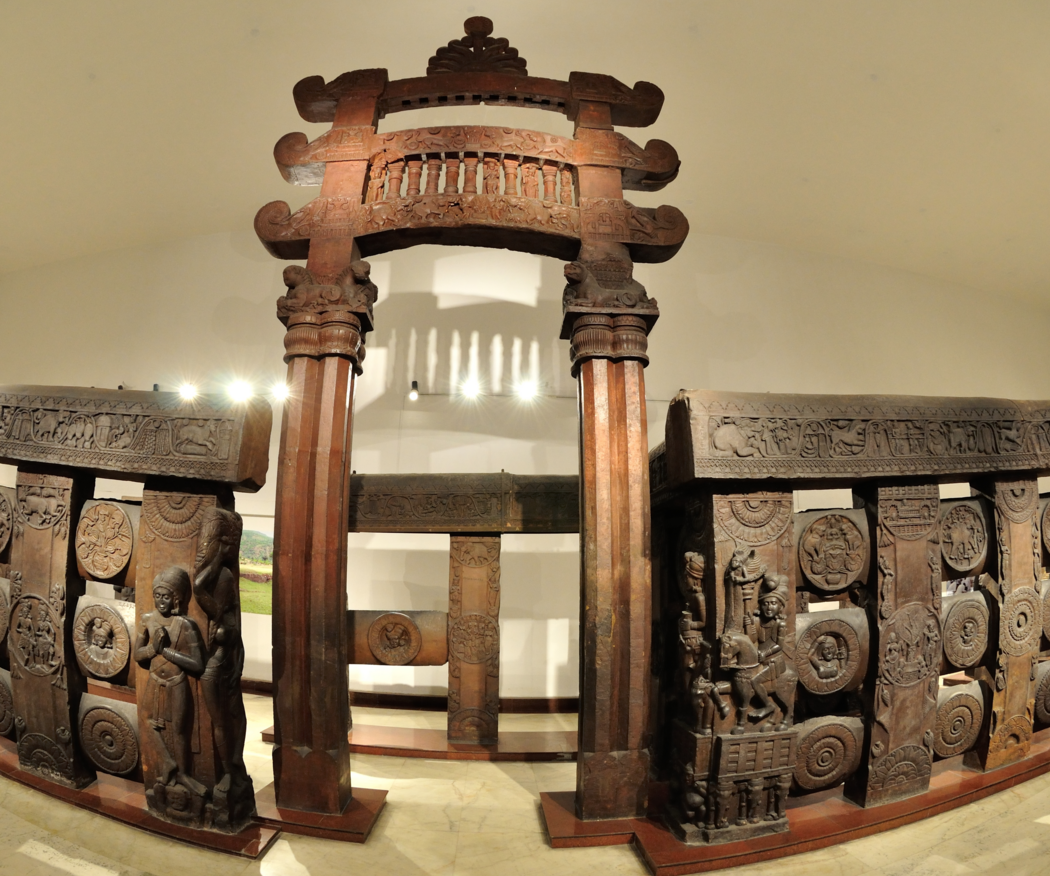 As evident, the Vedika and Torana have beautiful carvings. They are 5 elements –

1. Visual narratives about the life of Buddha

Buddha is represented in his iconic form – feet, bodhi tree, dharmachakra, empty seat and not the human form (symbolizing the Theravadin/ Hinayana Buddhism).

These gods of local cults start assimilating into Buddhism. It is believed that Yakshis were made through the contributions of women.

There are also medallions like the one shown below. They represent the sun god, various bodhisattvas, etc. 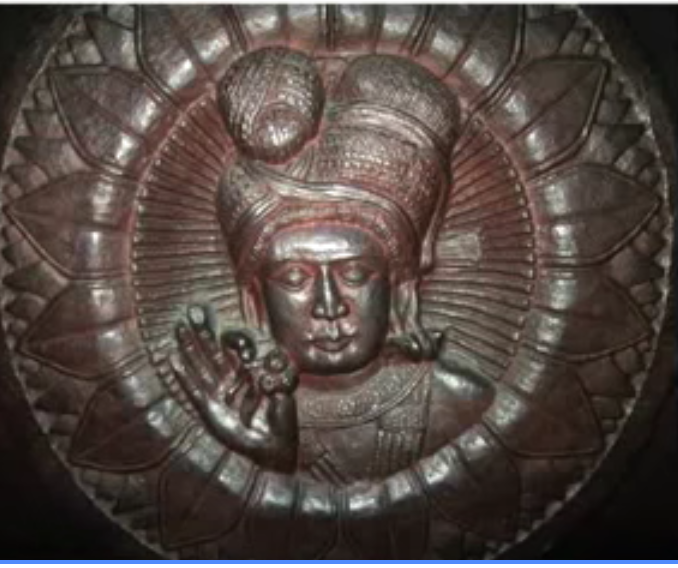 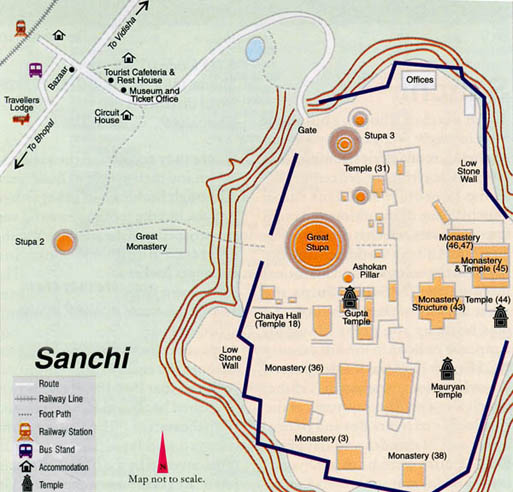 Stupa No. 1 is the largest and is called the Great Stupa. It has 4 gates with Toranas. In the pic, you see the Northern Gate. 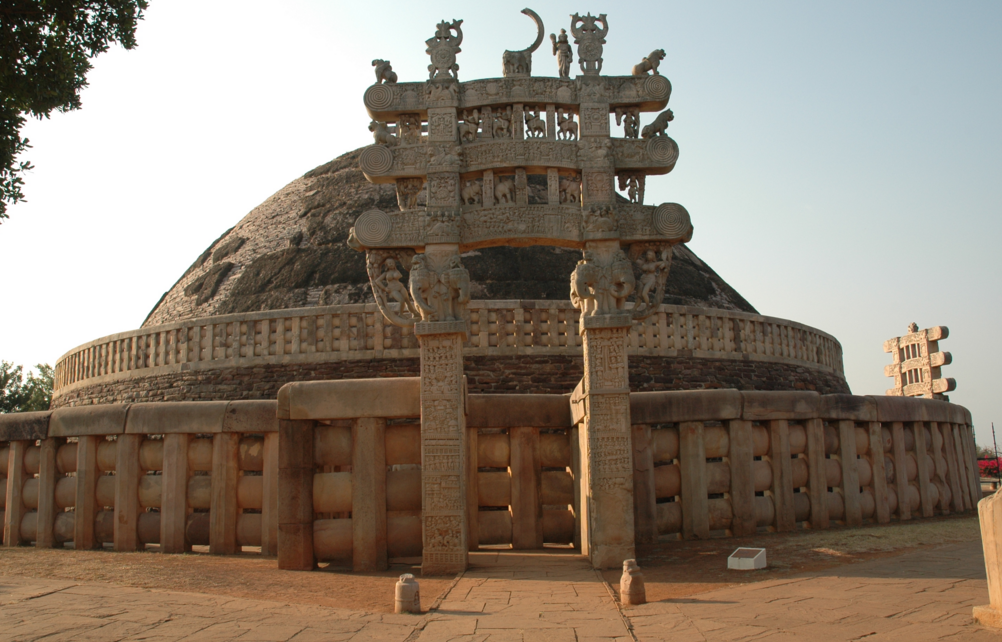 There are extensive carvings on the Torana. The themes are similar to those of Bharut.

Stupa 2 – This is the earliest stupa. Same time as Bharut but simpler. -Standing sculptures of Yakshas and Yakshis, discovered from Gwalior and Mathura

-Dwarfish Yaksha from the Pithalkhora caves in Central India

B. The Gandhara School and the Mathura School of Art

This period saw the emergence to two very important schools of art – one in Gandhara, North West Frontier Province and the other in Mathura.

The Gandhara Art received patronage from various dynasties – Indo-Greek, Indo Scythian and Kushan Kings. It was during Kanishka’s reign that both these centers flourished.

Buddha is depicted standing frontally with one leg bent. 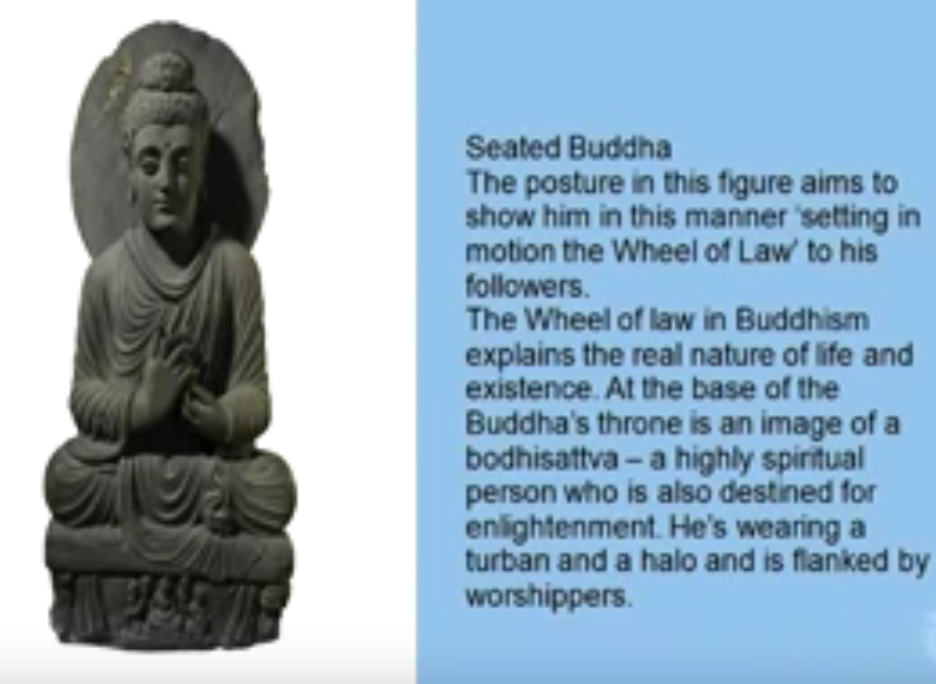 The Buddhist religion greatly flourished under the patronage of Kushan emperors, and several images of the Buddha and Bodhisattavas were produced after the earlier Yaksha types.

The first purely Indian Style art and sculptures were produced here. Mathura Art is famous for its iconographic traits – identification of particular deities based on the postures, attributes, vehicles.

Fleshy full-body figures in a number of postures. Female figures are voluptuous, heavy round breasts, narrow waist. Male figures are shown with a slight V shape. Buddha seen in Abhaymudra with one hand raised.

Mathura also becomes an important center of Jainism. A new kind of worshipping develops in this era – that of the Ayagapattas. The Jains produced votive tablets called ayagapattas that contain auspicious marks of worship such as fish couple or matsya yugala, the swatiska, etc. 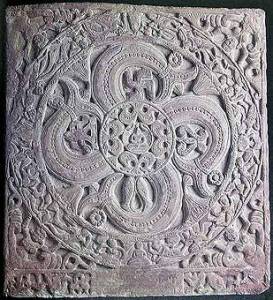 Jain Ayagapattas with a Tirthankara at the middle.

Various Shaiva images have been found from the region though their numbers are limited. Naga Cult is very prominent. A lot of Naga Temples have been found in/around this area.

Last but not the least, we have the statue of Kanishka. In the south, the Sangam Period starts (circa 300BC – 300AD). We see the emergence for 3 main kingdoms

In the Deccan, the Satvahanas declare themselves as independent after the fall of the Mauryan Empire and emerge as a powerful force. Their kingdom is centered around Aurangabad.

Their 3rd king, Satakarni I seems to have performed two Ashvamedhayajna. His achievements are described in detail in the Nanaghat Inscription. Referred to as lord of Dakshinapatha.

The strongest Satvahana ruler – Gautamiputra Satakarni carried out expeditions against the Saka rulers and drove them out of Maharashtra. His achievements are recorded in Nasik inscription. By 225 AD, the Satvahanas are replaced by Ikshwaku (refer map).

South sees the emergence of Tamil Language. For the first time we come to know of life in South India using literature. Sangam means assembly of scholars. Each Sangam consisted of a number of distinguished poets and erudite scholars who selected the best ones from amongst the works submitted to them. Many female authors seem to have contributed.

The Sangam classics, consisting of 18 works (8 anthologies of lyrics and 10 long poems), are well known for their directness of expression. The eight anthologies called the Ettuttogai are considered to be the earliest work belonging to the BC 300. The 10 poems called Pattupattu. They are divided in to

1) Aham deals purely with the subjective emotions of the lover.

2) Puram deals with objective emotions, mainly the valour and glory of kings, good and evil.

Some important works Sangam works are as follows –

Thinai : Another fascinating aspect of Sangam literature is its reference to 5 landscapes(eco-zones) and people associated with them known as Thinai.

B. Tamil Epics outside the Sangam Literature

We have 5 great epics.

We see no specific adherence to religion. The Sangam texts were secular in nature(one main reason how they differed from the Vedas) 5 pillars at each gateway. These 5 pillars represent the 5 milestones of the life of Buddha (discussed earlier)

Use this tool to explore further – http://www.ancientindia.co.uk/buddha/explore/intro.html.

Both caves belong to Hinayana Buddhism.

Karla Cave is the largest Hinayana Buddhist Chaitya in India built during Satavahana’s rule. Karla is the best example of rock-cut architecture, which is believed to carve out from a living rock. Some of its 2000 year-old wooden beams are still alive.

The earliest group of caves consists of caves 9, 10, 12, 13 and 15A. They were made during the period 100 BCE to 100 CE, probably under the patronage of the Satavahanas who ruled the region.

Check out our Case Study on Ajanta and Ellora to explore more.

A. The Amaravati School of Art

A relief medallion from Amravati belonging to the 2 century A.D. is a masterly representation of a scene showing the subjugation or taming of Nalagiri, a mad elephant let loose on the Buddha. A famous carving depicts the adoration of the feet of the Buddha by four women and belongs to the 2nd century A.D. from Amravati. This post is very unique. Very good information has been given. And, every single image in this post attracted me.