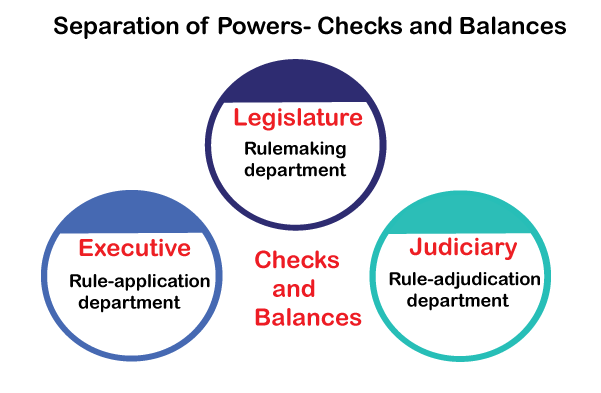 Why SOP in India is based on the principles of Checks and Balances:

So, it’s quite evident from the constitutional provisions themselves that India, being a parliamentary democracy, does not follow an absolute separation and is, rather based upon a fusion of powers, where close coordination amongst the principal organs is unavoidable and the constitutional scheme itself mentions it. Though such a system appears dilatory of the doctrine of separation of powers, it is essential in order to enable the just and equitable functioning of such a constitutional system.

While the answer is decent in terms of structure and you read the mentor comments really well, but the content and its discussion need more emphasis.
The reason being, in the 2nd part of the answer, you have not introduced the concept of checks and balances and simply discussed its some aspects.
The question specifically asks about it and hence your subheading in the 2nd part should reflect that demand of the question.
The content is Ok but better presentation is needed.

After the intro, use subheading to show what are you discussing. Always make a point of writing subheading.
The main theme of the question is CHECKS AND BALANCES and not once have you mentioned them in your answer.
This is not the way to approach UPSC mains answers.
You have to break the questions into little pieces and then frame the answer according to them.
In the intro, discuss what is separation of power and how it is not mentioned in the constitution.
In the 1st part of the main body, discuss the powers given to each of the three organs of the state and how despite not being mentioned in the constitution, the concept of separation of power works in each organ.
In the 2nd part of the main body, mention how it is more of a principle of checks and balances with each organ like judiciary having the power of judicial review; legislation having the power to check the powers of executive etc. In short, how it is not a watertight compartmentalisation of the organs but instead a fine line of keeping each organ in check for excess or abuse of power. As a result, no one branch or institution can become so powerful as to control the system completely.

The direction of the answer is decent.
You got the hang of the question.
The 2nd part is dealt with nicely.
The structure is very good.
Underline the imp stuff.
Good language

A very good attempt Chester.
The content is perfectly aligned with the demand of the question.
You have mentioned all the necessary arguments in your answer.
The structure is perfectly fine.
The conclusion is well managed and the content there is satisfactory.
All in all, a good template for a 10 marks question.
For timely review, please mention your payment ID when submitting the answer.

You got the demand of the question perfectly.
Good content in the main body.
The structure is superb.
But avoid large statements.
Generally, your statements should be around 10-12 words.
A very good intro.
Decent discourse overall Dipanshu.

A very good intro.
The overall discussion is very good.
You kept the demand of the question at the centre stage and never veered away.
The balance between both parts of the main body is perfect.
Could have used a diagram for Checks and Balances as well as you did with the separation of power doctrine.
Decent language and well explained content.

The answer is incomplete and ends abruptly. You have just discussed various aspects of vulnerability. You have to mention way…

The overall answer is decent. Good discussion in the main body. Good structure. Good intro. The way forwards are deep.…

Before discussing the issues with the ICT based projects, you have to mention some of the projects being implemented. The…

A well-structured answer. Good 1st part of the main body and good use of the flowchart. The balance is perfect.…

The point regarding Data collected and privacy law is not required. It is not the required demand of the question.…

The question is not about the e-governance. Instead, it is about ICT based projects and programs. Hence keep your discussion…

Before discussing the issues, mention some of the ICT based programs after the intro. In terms of presentation, you can…

A very good answer. You have covered all the elements nicely. The balance is perfect and the main focus is…

What is the point of discussing the issue of resistance to conversion? You have to elaborate it further to make…

Try to underline your imp points more prominently. It should not be scarce. The 1st part of the answer is…