Features like bicameral legislature, devolution of power to local self governance, federal polity with state governments, state lists & union lists, public service commission, practice of voting in choosing our representatives etc are some of the key features of MCR that got reflected in our constitution.

Before ending the answer, mention few shortcomings of MCR but not in details.

The NGT was established in 2010 under the National Green Tribunal Act 2010, passed by the Central Government. The stated objective of the Central Government was to provide a specialized forum for effective and speedy disposal of cases pertaining to environment protection, conservation of forests and for seeking compensation for damages caused to people or property due to violation of environmental laws or conditions specified while granting permissions.

The NGT has the power to hear all civil cases related to:

How NGT is different than regular judiciary:

Performance of NGT so far:

By providing functional autonomy like UPSC and RBI, maintaining transparency and bringing it under RTI and upgrading NGT from that of a tribunal to a court will go a long way in its working and efficiency. NGT has done well so far. India is among the few countries which have dedicated judiciary for environment protection. Lets build upon this achievement and provide a sustainable future to the nation while maintaining balance between development and environment. 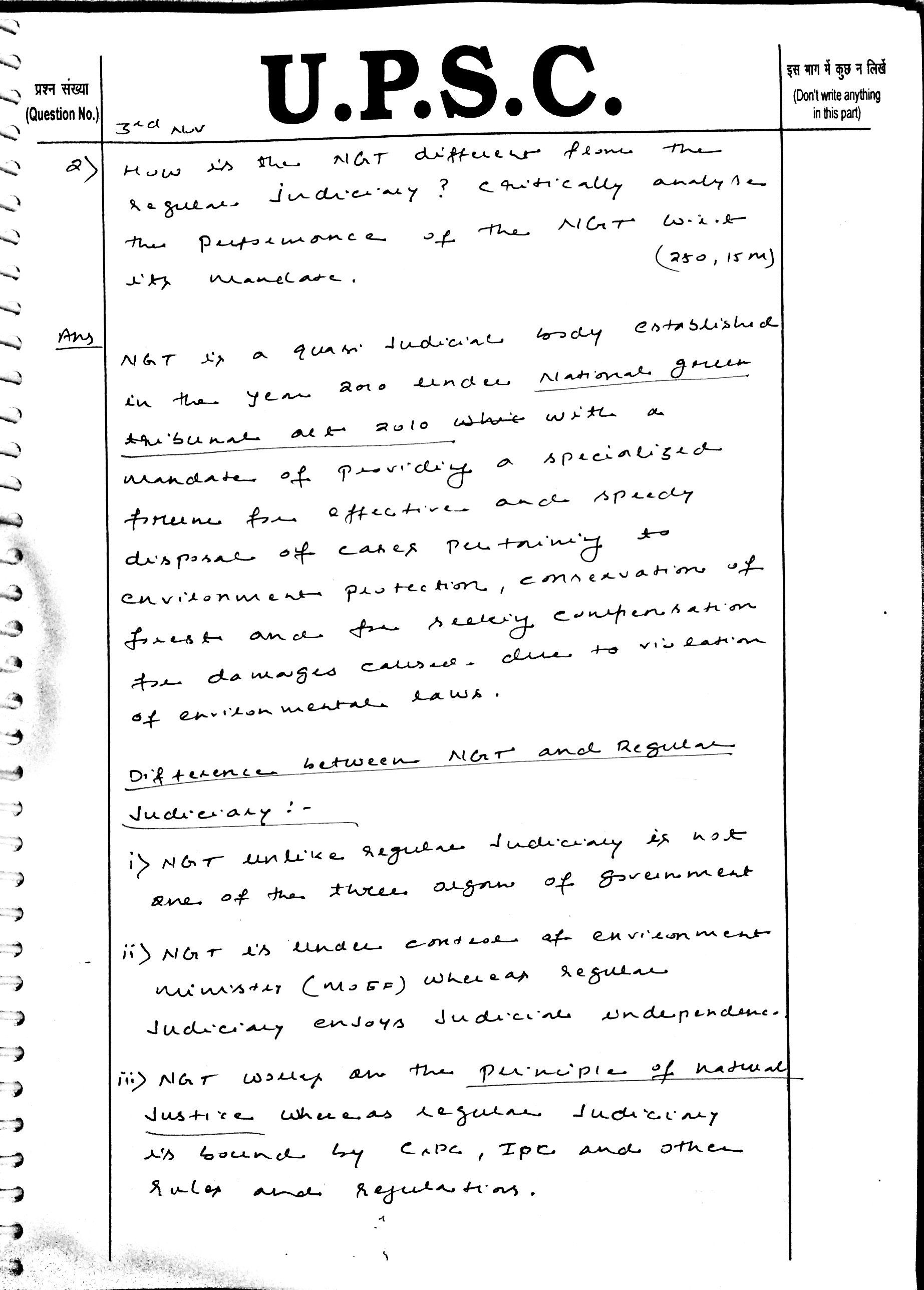 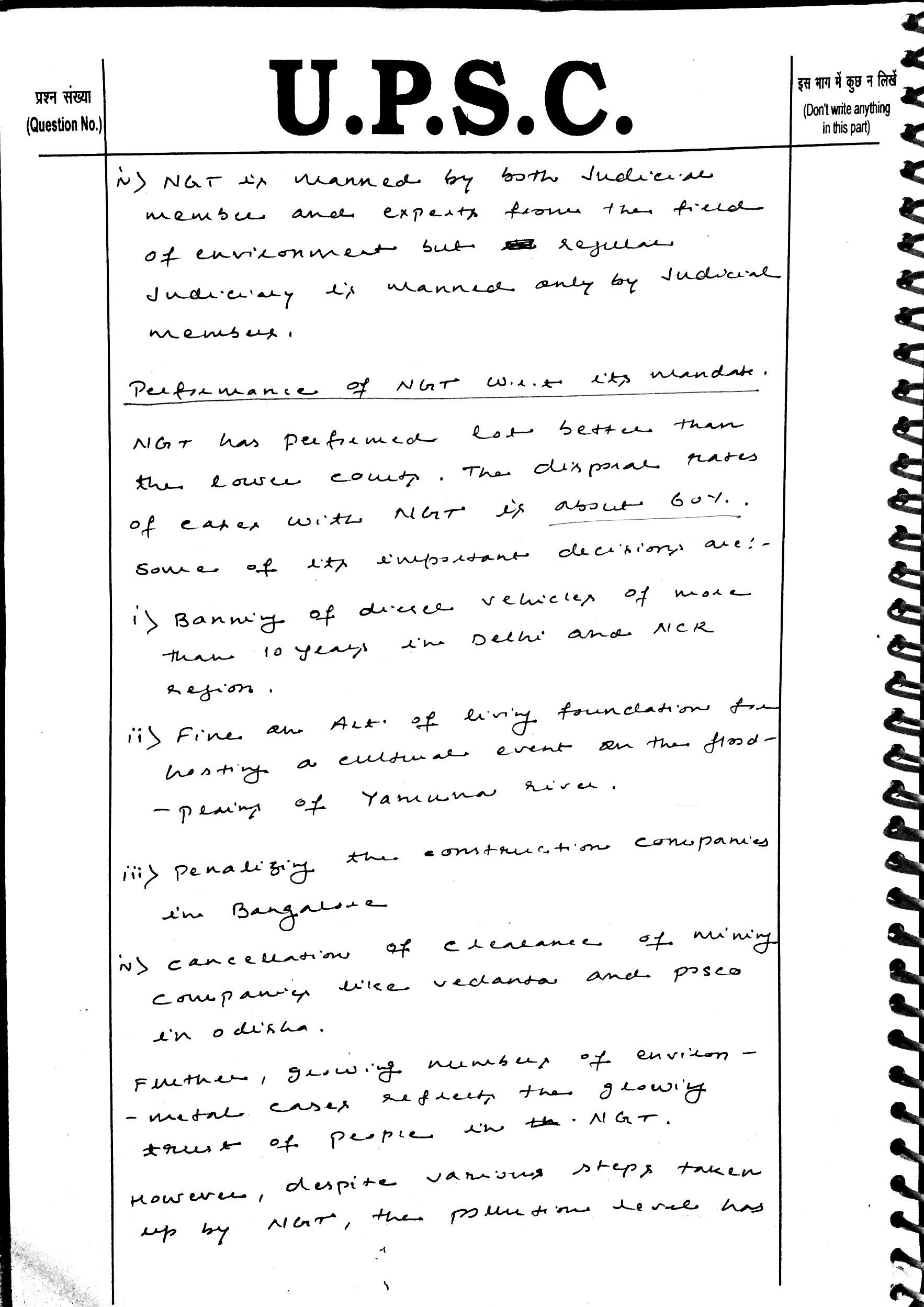 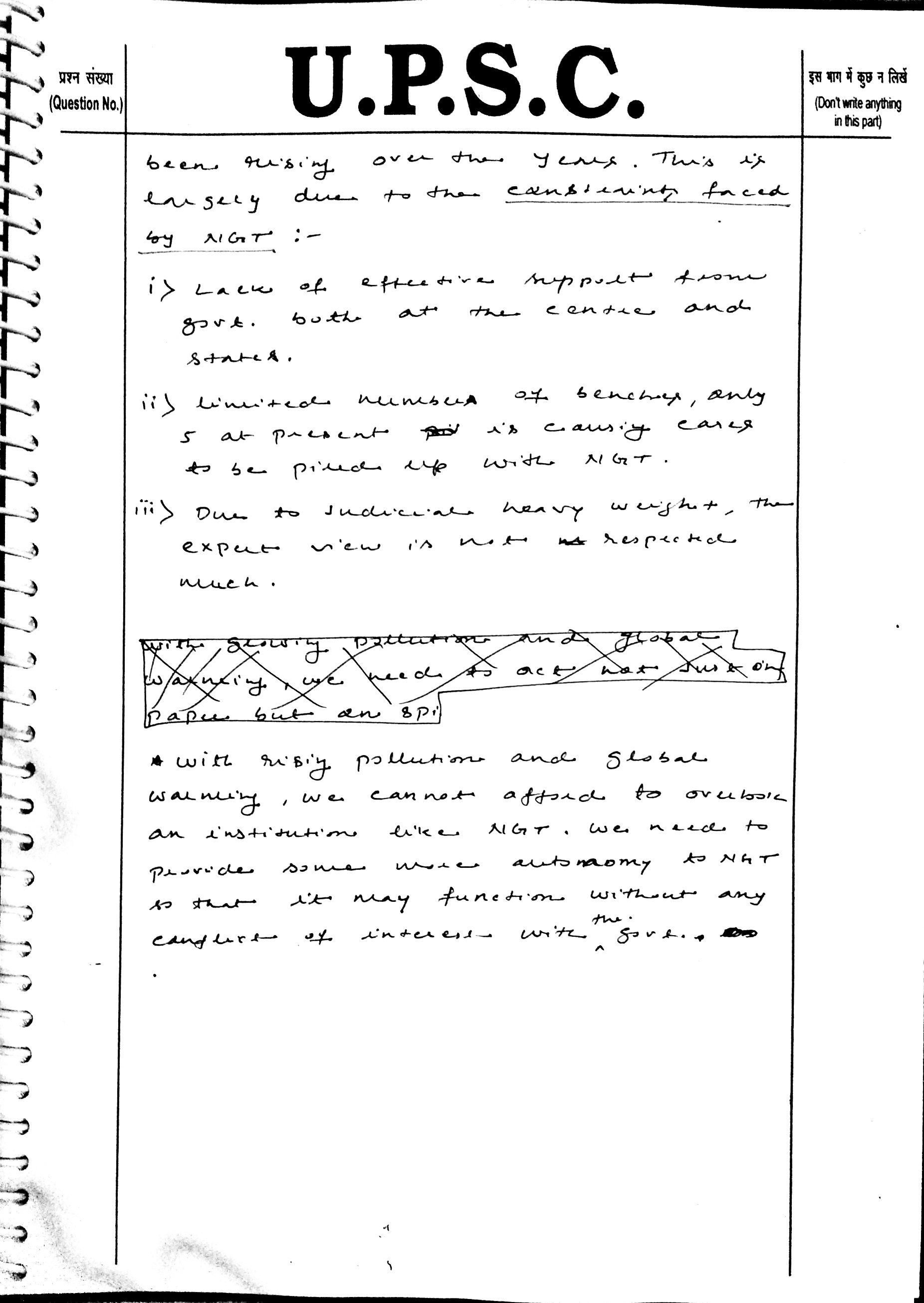 Hello Bazzi…
-Introduction is good…
-The mandate mentioned is of less importance and are too general…need to be specific…
-You have brought more points in its working…but the question demands more points in criticism…Your criticisms are of narrower context….think wider criticisms….
Overall your attempt is average….many points are of general manner….
May improve for sure if practice continues….keep writing… 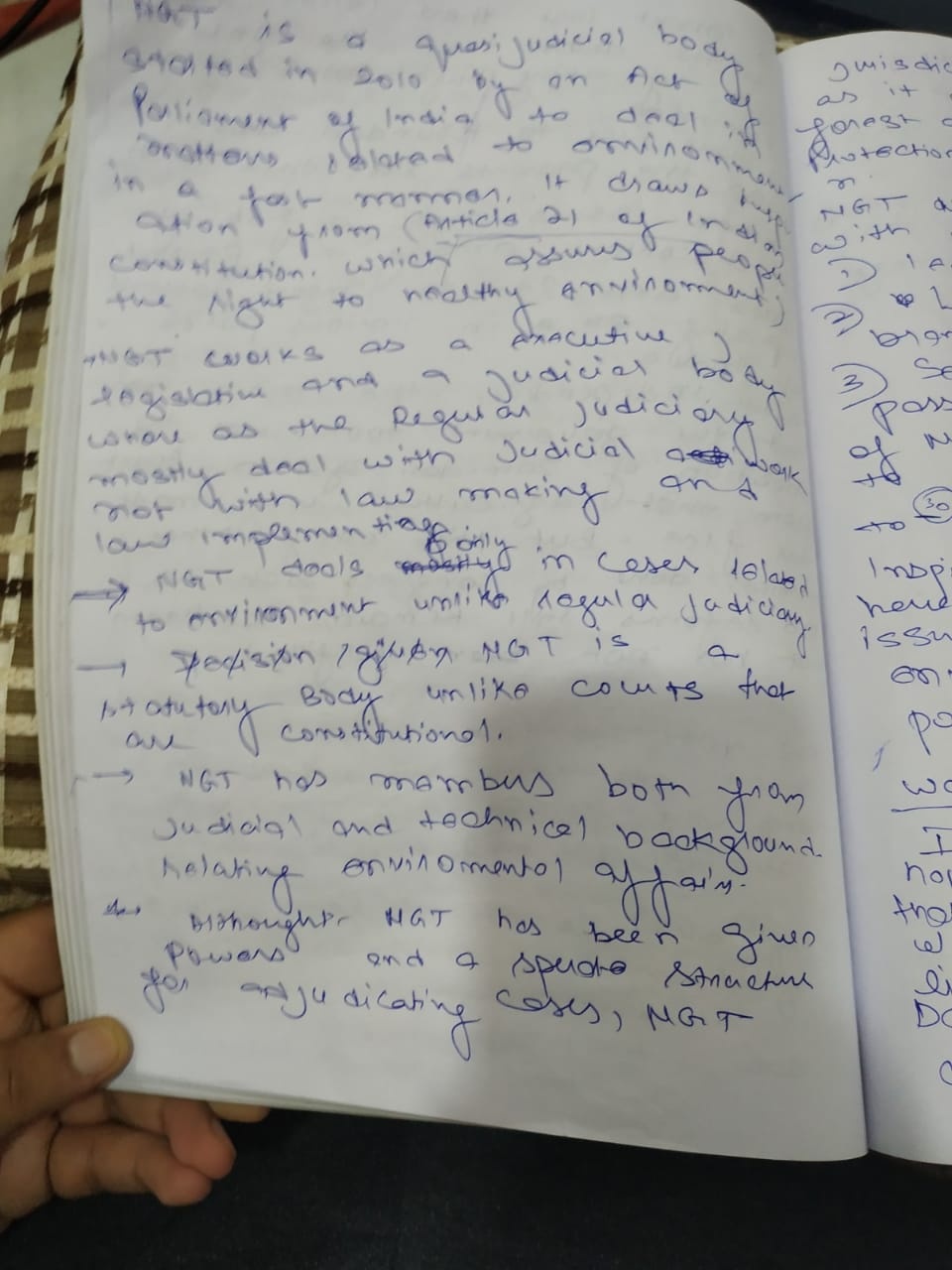 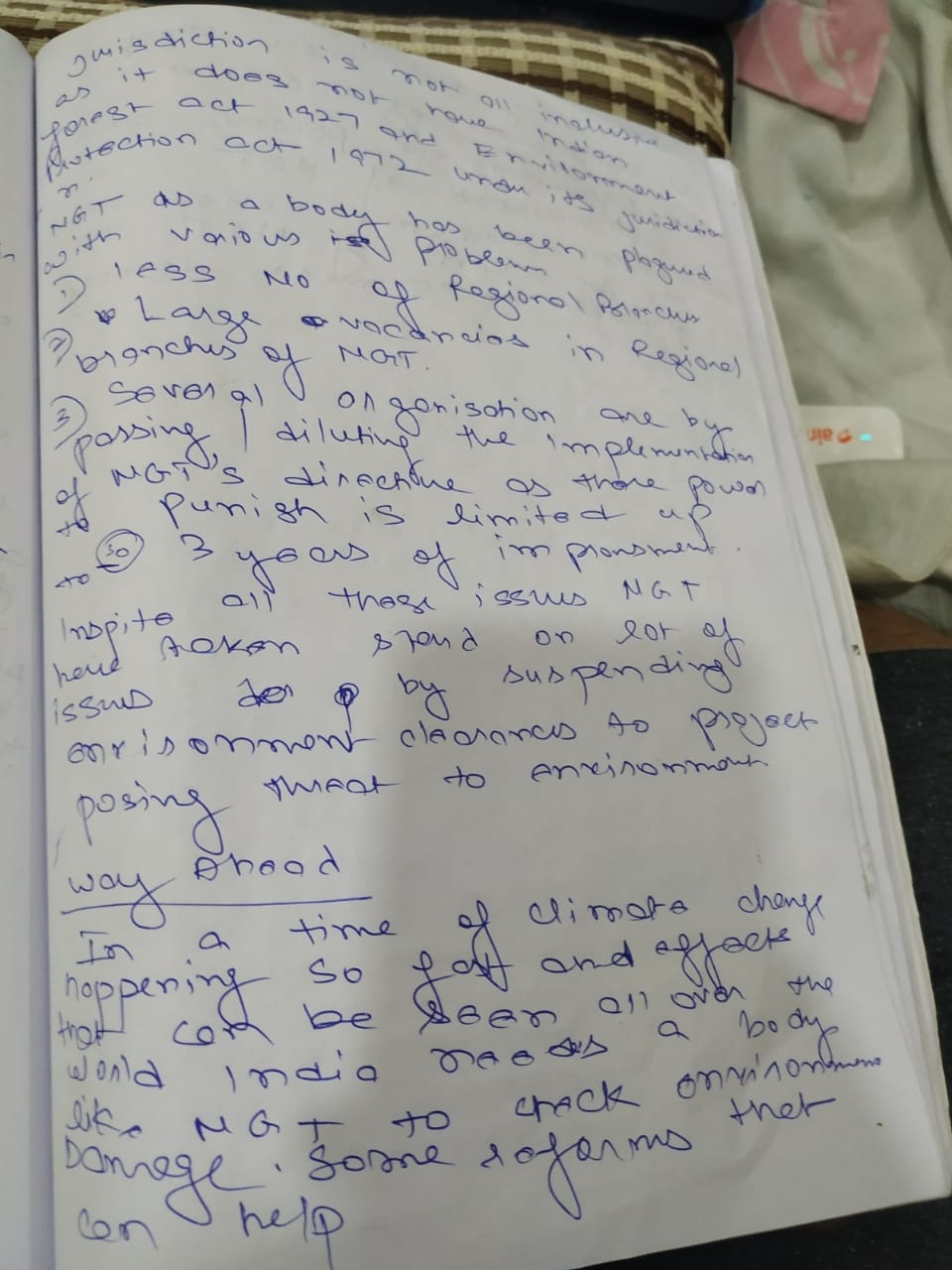 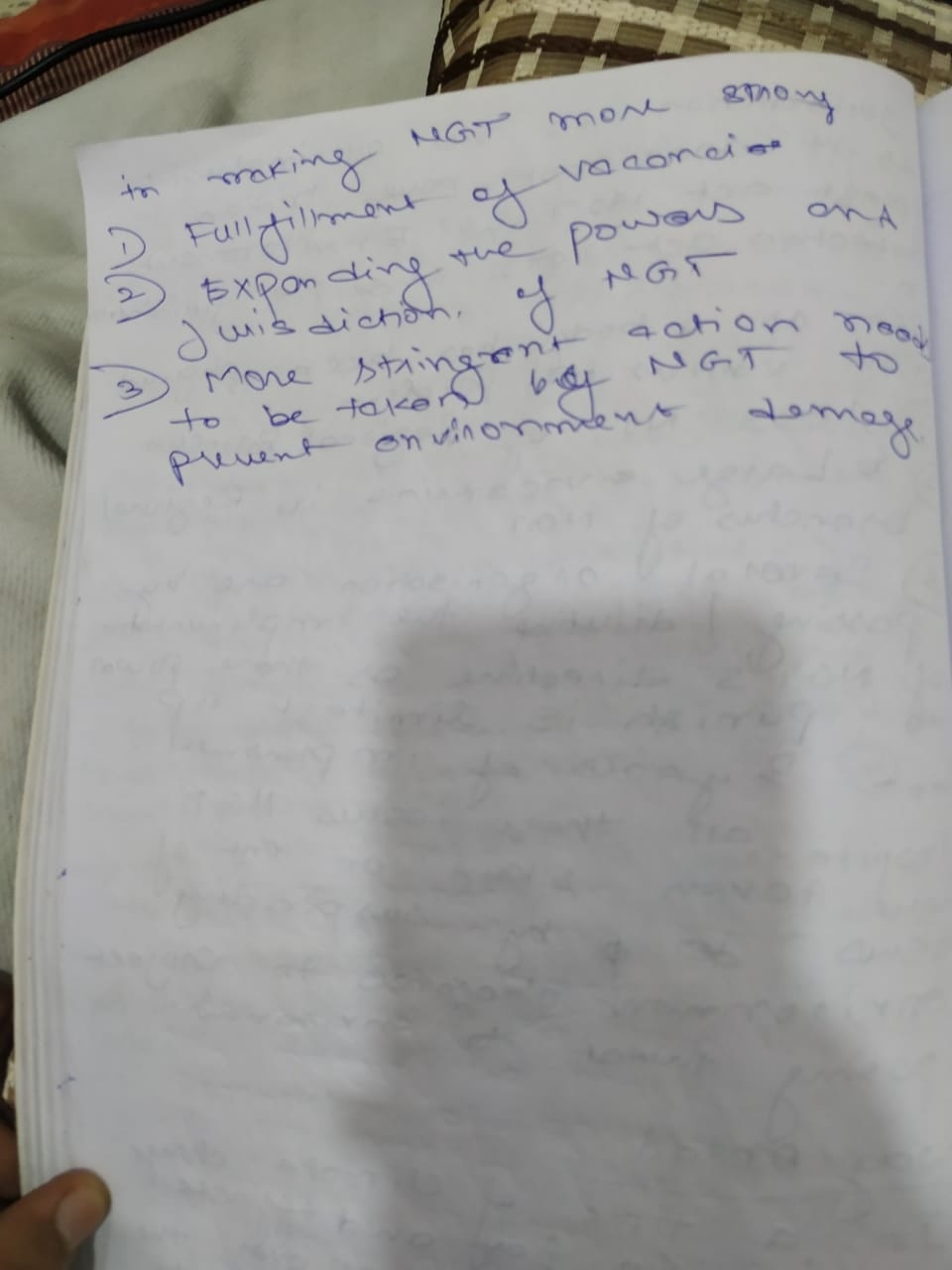 Hello Puru Rajput….
-Its difficult to read your answer because its not arranged properly…You have also written on margin and clicked picture in slanting way making the word difficult in appearance…It has bee my suggestion since beginning that please write in proper sheet leaving margin on both edges of the page…its for your benefit only as you will be habitual in writing on the proper sheet….Such presentation will have adverse effect on constructive remarks and suggestion….Its my request kindly consider this….

-Introduction is okay…okay…
-2nd para is not at all relevant…NGT does not follow executives decision…rather it works on the philosophy of Natural justice…
-The other differences mentioned are of less importance though okay….but is show you have less idea about the topic….
-Criticisms presented are of less relevant….we need to talk like…judicial activism without considering economic impact, parking lot for retired judges and bureaucrats, strict implementation of its laws etc…..etc….
-Avoid using shortcuts for any words….like Govt., No (for number), Org (for organization) etc….complete words should be written…
-Conclusion is missing….You would have mentioned conclusion instead of way ahead….
Overall poor presentation…may improve further….keep writing….

Kindly mention ID provided by us while uploading answers…. 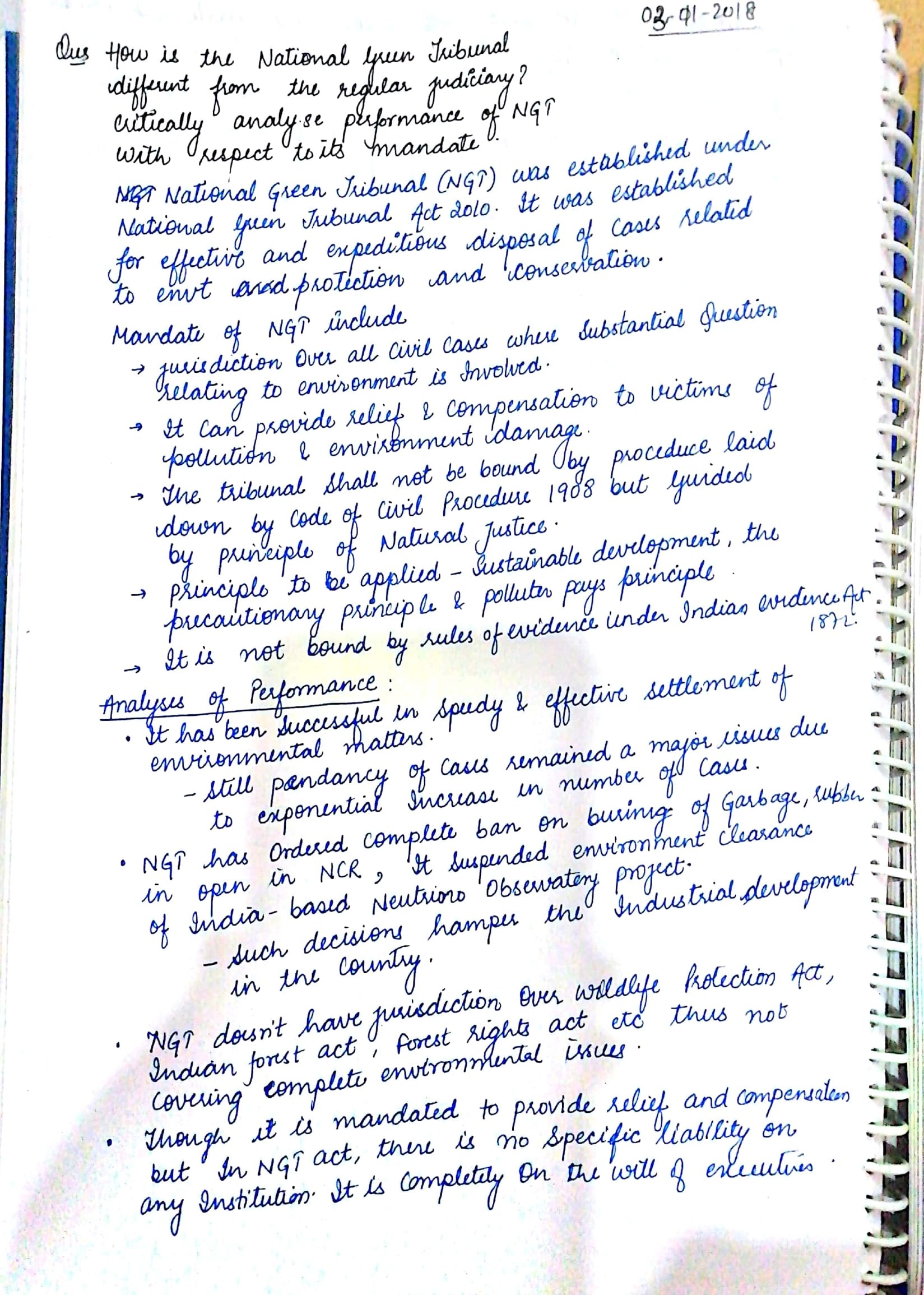 Hello Priya…
-Good Introduction….
-Mandates mentioned are okay….
-You have brought very few points as criticism….More relevant criticism required….as per the demand of the question….like…judicial activism without considering economic impact, parking lot for retired judges and bureaucrats, strict implementation of its laws etc…apart from what you have mantioned….
-Conclusion is missing…
Your approach is good but answer need to be completed….in format and framework…
good attempt….keep writing….
Marks awarded: 4.5/15 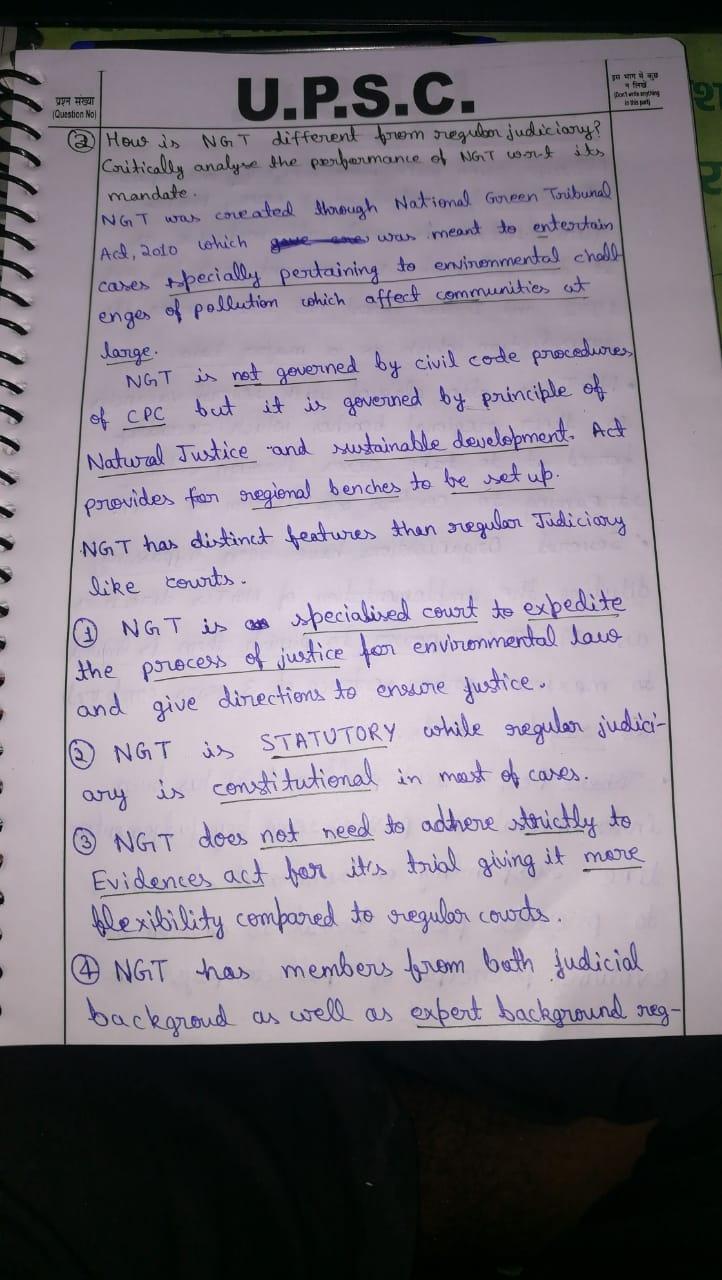 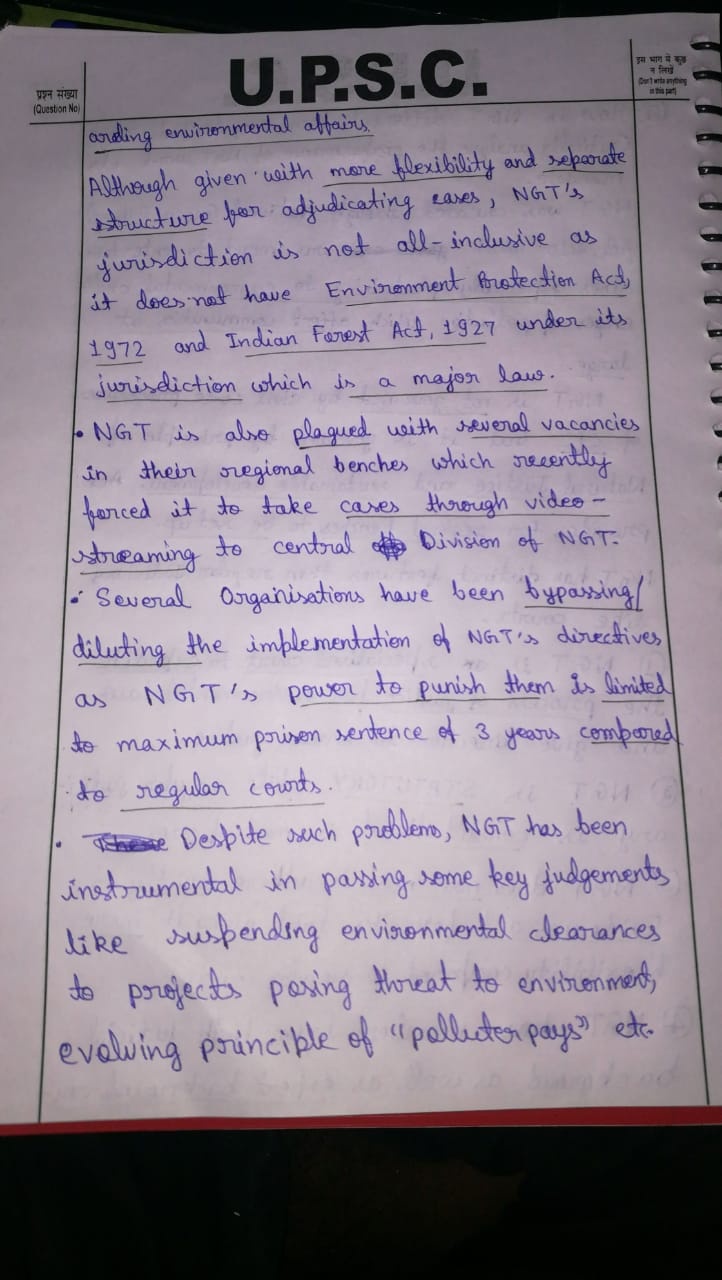 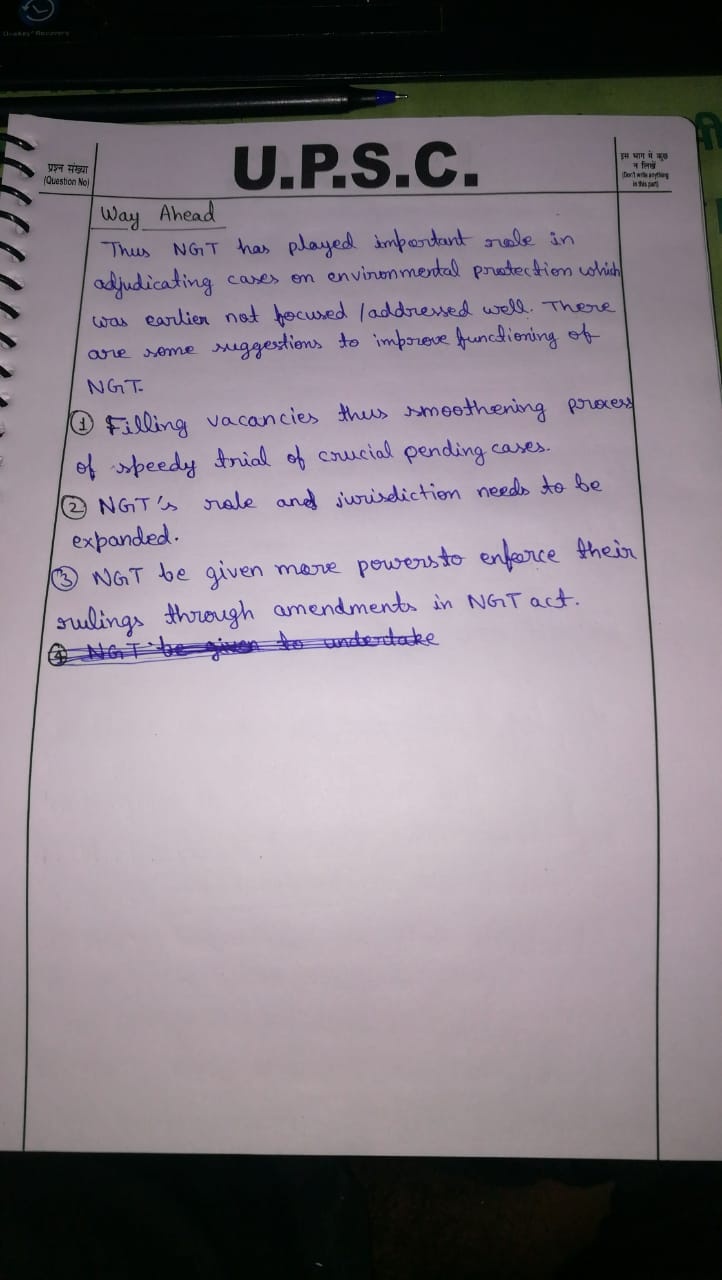 It is there in way ahead…. one quick question,how do i improve speed ?

-Hi Prafull
-Practicing is the only thing by which we can improve speed….
-Write from what you can recall…and not by referring the hints, notes, books, internet, again and again while writing…you can read from all sources…before writing…then mug it up in your mind….think what question is asking…and sit for framing answer….This will surely improve your timing…
-150 words answer should not take more than 7-8 min of time…in actual writing…it includes everything…thinking, jotting down the points, prioritizing the points…and writing….

So, Only practice can improve the way we write…
-Join the telegram group if possible…. 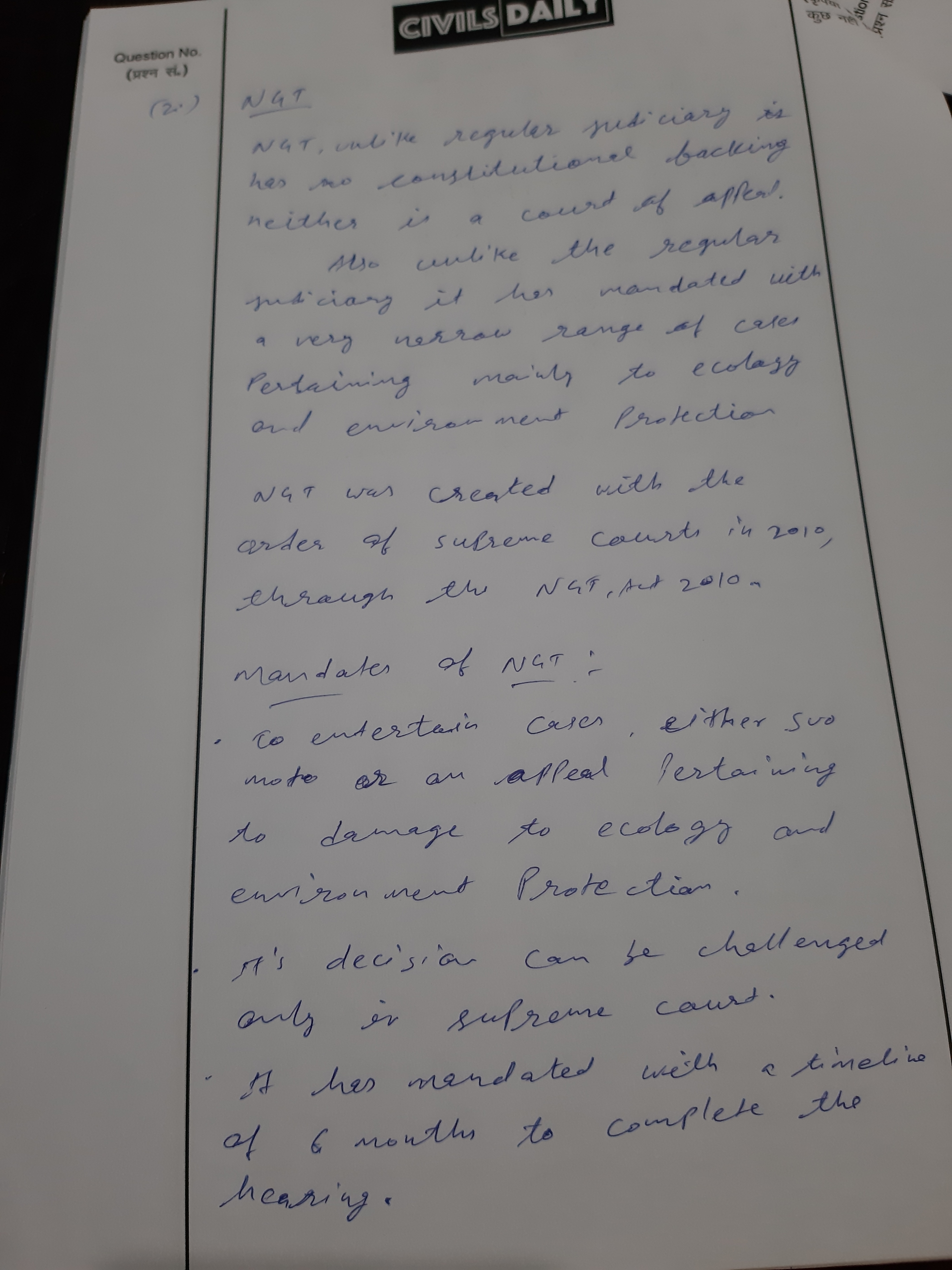 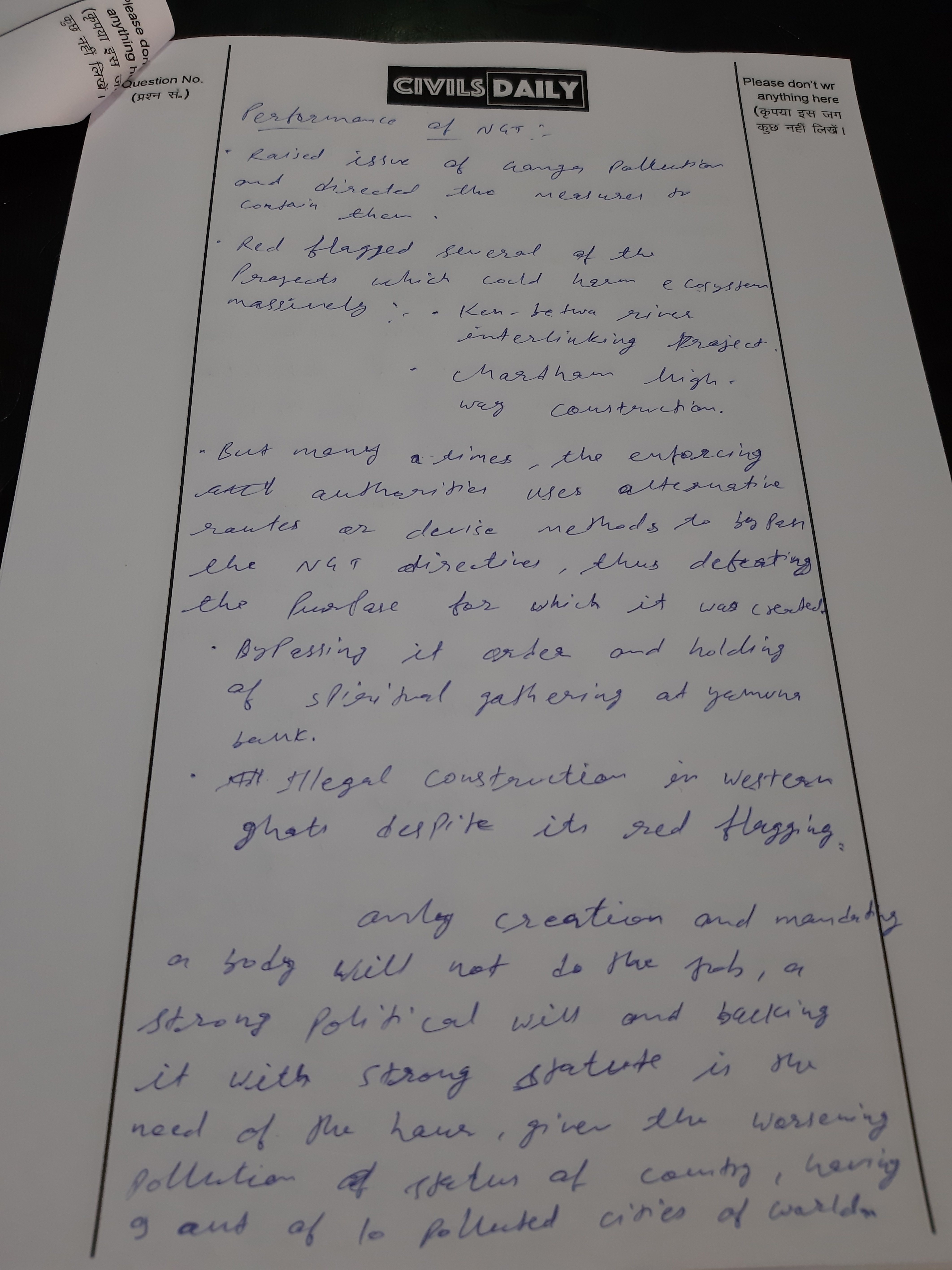 Hello Invincible…
-In introduction…NGT can work as a court of appeal…
-The 2nd para narrows the range of functioning of NGT …Like…The NGT has the power to hear all civil cases related to:
● The Water (Prevention and Control of Pollution) Act, 1974;
● The Water (Prevention and Control of Pollution) Cess Act, 1977;
● The Forest (Conservation) Act, 1980;
● The Air (Prevention and Control of Pollution) Act, 1981;
● The Environment (Protection) Act, 1986; (aka EPA)
● The Public Liability Insurance Act, 1991; (good option to confuse)
● The Biological Diversity Act, 2002.
-The content of the third para should be mentioned in intro itself…
-Under mandate….your point is contradicting the idea you have provided in Intro…’Appeal’…
-Points mentioned are too general…nothing much mentioned about the difference in the judiciary and NGT…very limited points that too less relevant one…
-Refer our Model answer for better clarity….
Though attempted in general manner…may improve further for sure…keep writing…
Marks awarded: 3.5/15