Suresh Prabhu has set out an ambitious medium-term goal to reset the country’s oldest institution, including its governance, and restore its key place in the Indian economy. Railway is facing twin challenges of finances and ability to be a growth driver for the economy 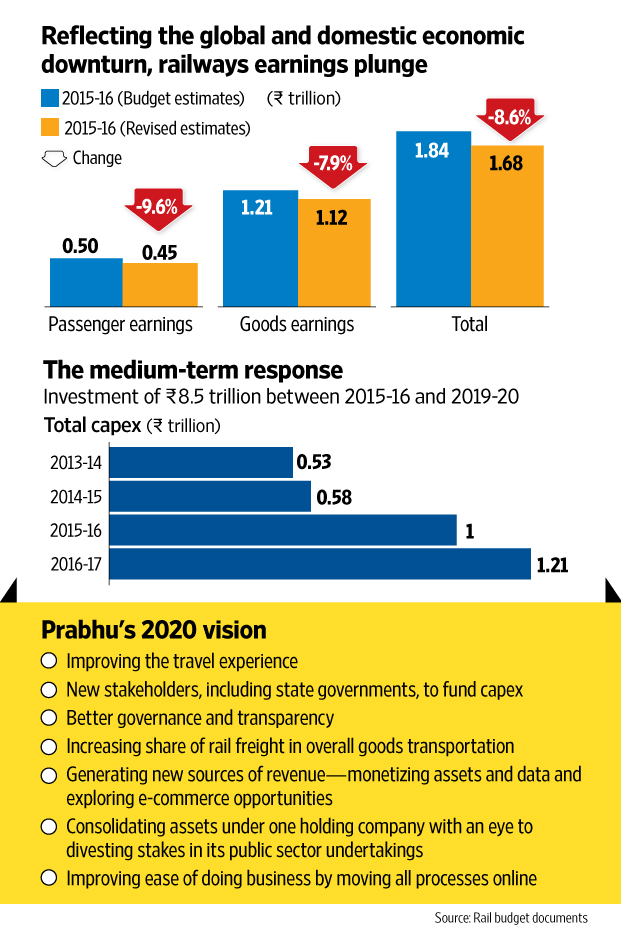 There is shortfall in traffic receipts worsened by low freight demand from core sector. The Railway minister outlined the medium-term plan of investing Rs.8.5 trillion by 2019-20. The investment plan for 2016-17 is Rs 1,21,000 crore –

Do you know about Sundry earnings of Railways?

Sundry Earnings: All earnings on add-on services (which are not free of cost), including WiFi, concierge service, advertising, etc. Simply put, Railway puts all its non-tariff earning as Sundry Earnings in its account books.

These earnings stood at an estimated Rs. 6229 crore this year.

Challenge: The freight business provides two-thirds of Indian railways’ revenues, but it is struggling with capacity constraints and slow industrial demand. Also, our freight rates are among the highest in the world, which make our products uncompetitive.

Budget Proposal: To expand the list of commodities it services—increasing it to 40 from nine at present by including automobiles, packaged consumer goods, cotton, fruits and vegetables.

Dedicated Freight Corridors: It is proposed to take up the following freight corridors:

Impact: They can radically slash transit time for goods. Also, shifting of freight traffic from existing tracks to the new corridors would release capacities, helping increase speed of passenger trains.

Criticism: The high freight rates have diverted railway traffic to roads. In fact, discounting for the fuel component in freight charges, the rates should have been reduced this year.

Budget Proposal: To reorganize the Railway Board along business lines and suitably empower Chairman, Railway Board to lead the organization effectively