Click here to enroll for the Decimate Prelims 2020 [Batch 2] 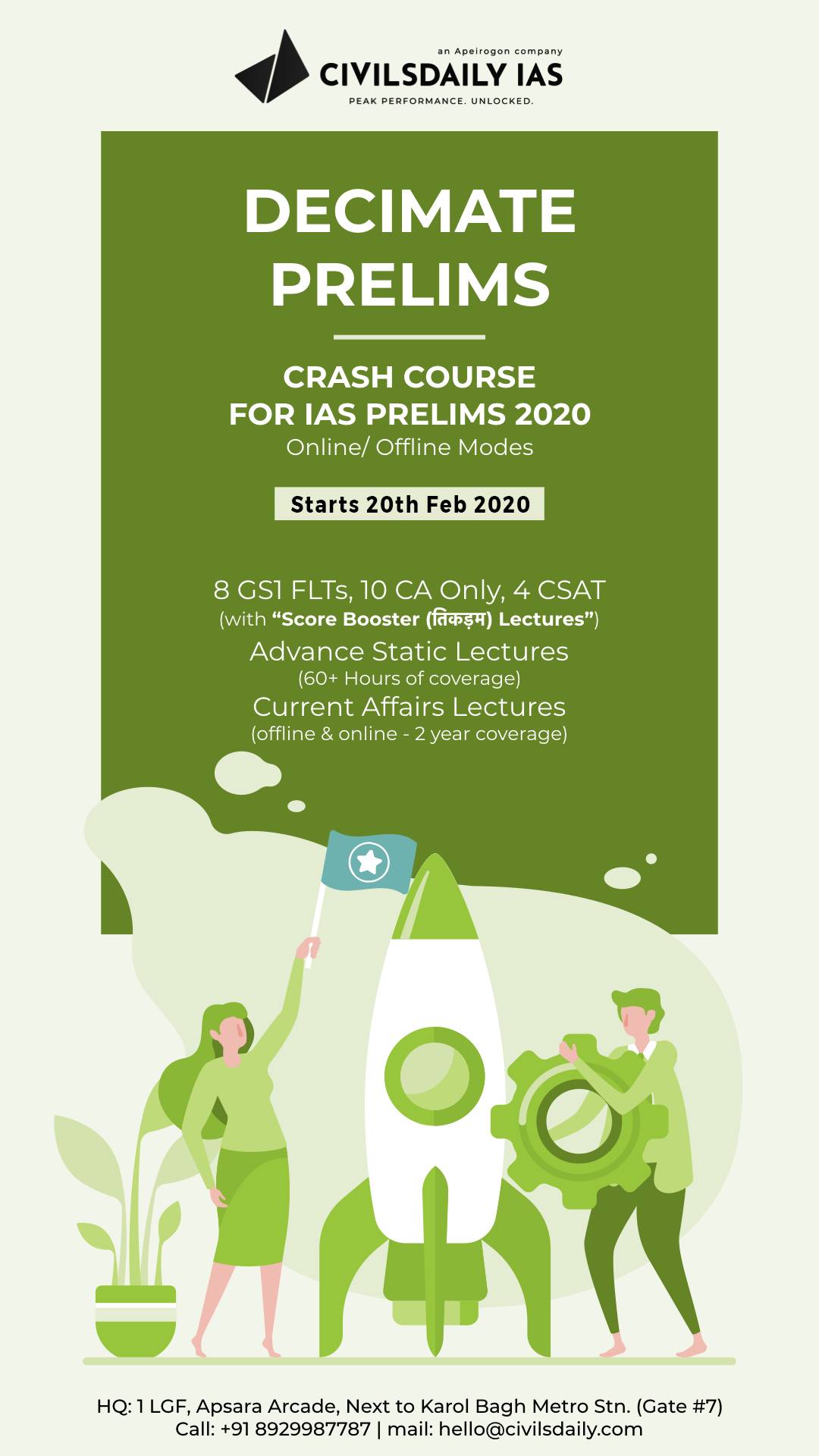 Before we jump into the finer details of our crash course for IAS Prelims 2020, let’s take you to a quick re-cap on the changing trends of the IAS Prelims from 2015 to date.

There was a time when aspirants were coaxed to prepare for IAS Mains and let Prelims be taken care of as a by-product of that preparation. This is not that time.

There was a time when in-service officers aspiring to improve their ranks and get the coveted IAS, IPS, IFS used to fine-tune their optional and interview strategies and cruise through the IAS Prelims with a month’s worth preparation. This is not that time either.

Here’s how IAS Prelims evolved over the last 4-5 years:

Equal emphasis on traditional and current affairs based questions. a combination of logical understanding and factual clarity.

With reference to art and archaeological history of India, which one among the following was made earliest?
a) Lingaraja Temple at Bhubaneswar
b) Rock-cut Elephant at Dhauli
c) Rock-cut Monuments at Mahabalipuram
d) Varaha Image at Udayagiri

Heavily based on CA and mostly one-liners: a major digressed from the earlier pattern

Recently, for the first time in our country, which of the following States has declared a particular butterfly as ‘State Butterfly’?
a) Arunachal Pradesh
b) Himachal Pradesh
c) Karnataka
d) Maharashtra

Paper was difficult in terms of understanding and clarity in concepts. Polity more based on conceptual clarity, questions were little twisted

Recognition of Prior Learning Scheme’ is sometimes mentioned in the news with reference to
a) Certifying the skills acquired by construction workers through traditional channels.
b) Enrolling the persons in Universities for distance learning programmes.
c) Reserving some skilled jobs to rural and urban poor in some public sector undertakings.
d) Certifying the skills acquired by trainees under the National Skill Development Programme.

The questions based on the broader perspective of any topic; Current affairs were very indirect; History questions required logic rather than just facts; Polity questions were more analytical

The staple commodities of export by the English East India Company from Bengal in the middle of the 18th century were:
a) Raw cotton, oil-seeds and opium
b) Sugar, salt, zinc and lead.
c) Copper, silver, gold, spices and tea
d) Cotton, silk, saltpeter and opium

More common sense (Tikdam) based questions in CA and Polity; in-depth analysis to be done in Science and Technology and this is a stark departure from how easy S&T used to be!

In the context of proposals to the use of hydrogen-enriched CNG (H-CNG) as fuel for buses in public transport, consider the following statements:

1) The main advantage of the use of H-CNG is the elimination of carbon monoxide emissions.
2) H-CNG as fuel reduces carbon dioxide and hydrocarbon emissions.
3) Hydrogen up to one-fifth by volume can be blended with CNG as fuel for buses.
4) H-CNG makes the fuel less expensive than CNG.

We have been following this space very closely and we were among the first ones who called out the pitfall of over reliance on traditional sources for IAS Prelims. We have been advocating smart study and calculated risks via our score boosting techniques (Tikdams/ तिकड़म) right from 2016.

We would invite you to go through the lecture + test series time table (Batch2) to understand the comprehensiveness of this course.

Here’s a quick list of key features and pricing: 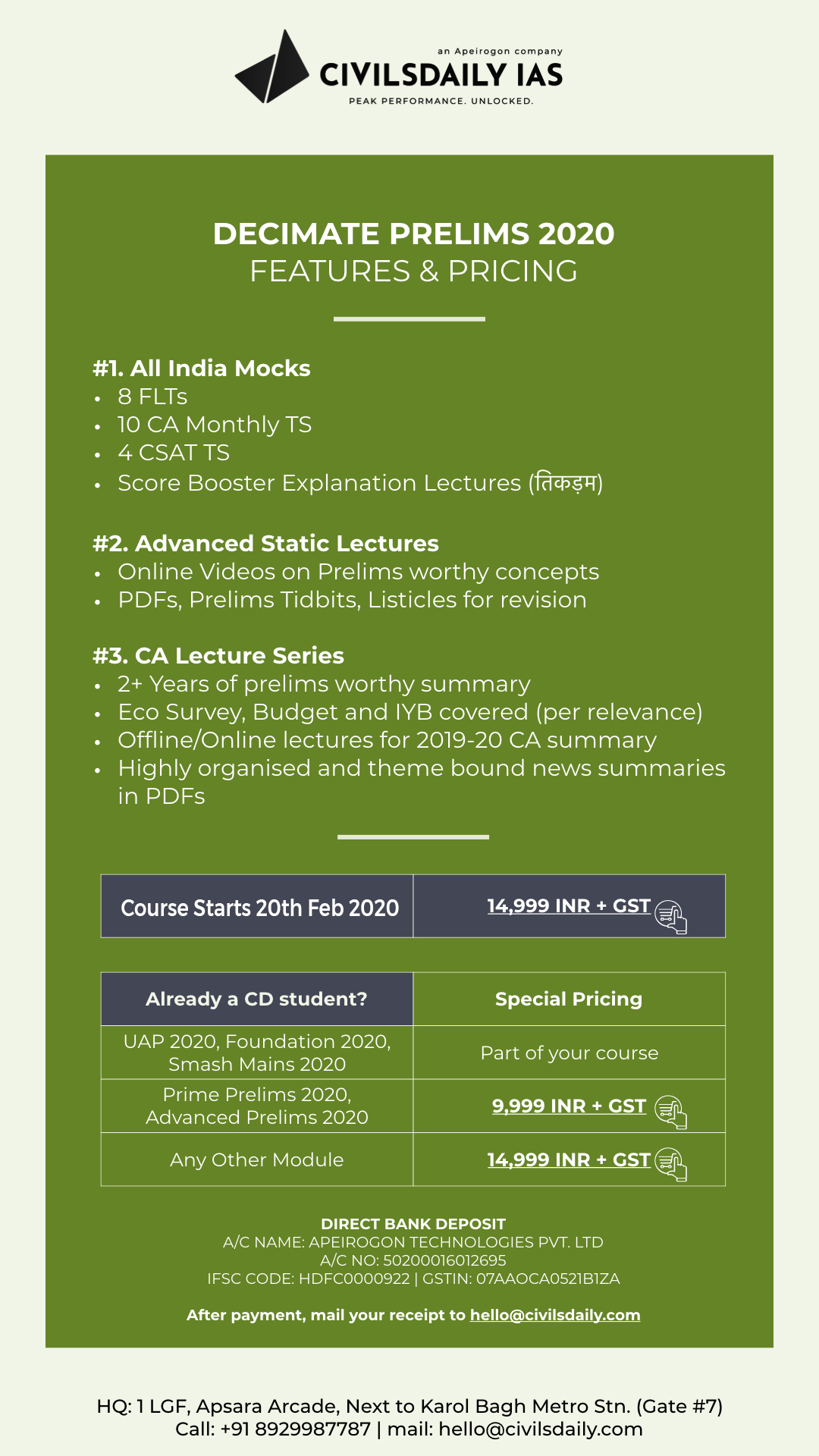 Click here to enroll for the Decimate Prelims 2020 [Batch 2]

What are the challenges to our cultural practices in the name of secularism? (10 Marks)