On 27 September, an evening remembered for skywatchers or stargazers in most parts of the world, for they were witness to a rare celestial event, aptly described by many as “once in a generation”.

An exceptional celestial treat is in store for sky gazers as the event, called the Super Blood Moon, saw the Supermoon phenomenon combine with a lunar eclipse (where the Sun, the Earth and a brighter, much larger Moon lined up together).

So, What exactly The Supermoon Is?

A Supermoon is a phenomenon that occurs when, a full or new Moon coincides with a Moon that is nearing its minimum distance (perigee) to Earth.

The Moon takes an elliptical orbit around Earth, which means that the average distance between the two changes from as much as 405,000km (its apogee) to as low as 363,000km at the perigee.

Simply put, the Supermoon occurs when the Moon is at its closest to the Earth. NASA says the phenomenon can make the Moon appear larger by nearly 14% larger than its usual visible size. 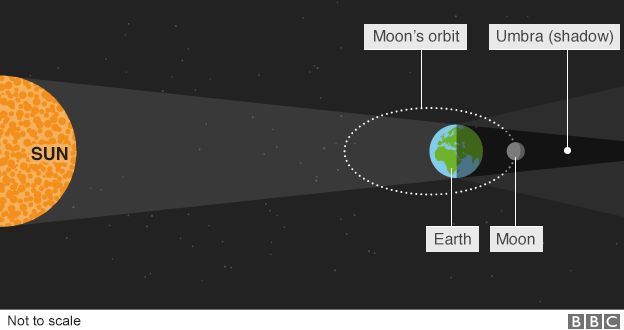 But, Why the Moon turns red during a total lunar ?

During a total lunar eclipse, white sunlight hitting the atmosphere on the sides of the Earth gets absorbed and then radiated out (scattered). That is, the atmosphere filters out (scatters away) most of the blue-colored light and what’s left is the orange and red coloured light.

This red coloured light passes through our atmosphere without getting absorbed and scattered, before the atmosphere bends it (refracts it) back out, projecting indirect, reddish light on to the Moon.

The reddish light projected on the Moon is dimmer than the full white sunlight that the Moon typically reflects back to us. That’s because the light is indirect and because the red-coloured wave lengths are only part of what makes up the white light from the Sun that the Moon usually receives.

When we see a sunrise or sunset from our perspective on Earth, sunlight is coming in at a low angle. It has to travel through a lot of atmosphere, scattering more and more blue-colored light as it goes until what is left when the light reaches us at these day/night transition times is the more reddish wavelengths that get through.
But, interesting fact is that everyone may see a Moon that is brick-coloured, rusty, blood red or sometimes dark grey, depending on terrestrial conditions.

Do you know next appearance is directly in 2033 ?

Sunday’s event was the first Supermoon lunar eclipse in over three decades. The last time the two phenomena combined was in 1982. The next such occurrence is expected to be 18 years later, in 2033. Sunday also saw the fourth instance of a blood Moon in the last two years as part of the “tetrad series” or a series of four consecutive total eclipses occurring at intervals of approximately six months.

So, is that We’re basically seeing all of the sunrises and sunsets across the world, all at once, being reflected off the surface of the Moon, How amazing it is !