Back to Basics. What is Unemployment?

Unemployment is a phenomenon that occurs when a person who is capable of working and is actively searching for the work is unable to find work.

People who are either unfit for work due to physical reason or do not want to work are excluded from the category of unemployed.

Labour Force: Persons who are either working (or employed) or seeking or available for work (or unemployed) during the reference period together constitute the labour force.

Measure of Unemployment in India

Back to Basics: Disguised Unemployment

Since maximum output of 100 Kg is already reached.

The situation of disguised unemployment is most prevalent in the agriculture sector of the underdeveloped countries. The key idea is that the amount of population in agriculture which can be removed from it without any change in the method of cultivation, without leading to any reduction in output.

Back to Basics: Under Employment.

Underemployment is the most dangerous kind of unemployment in an economy. Underemployment is a situation under which People with a higher level of skills are employed in less productive jobs. It simply means that the Labour force of the economy is not fully utilised as per their skills and experience.

Example: an individual with an engineering or management degree working as a clerk or accountant in a firm or a social science graduate working as a pizza delivery boy.

The consequence of Underemployment. 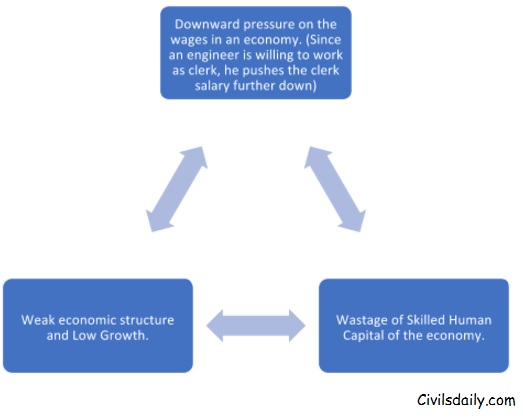