Go ahead and let us know the innovations possible in these questions !

We will be out with solutions soon. 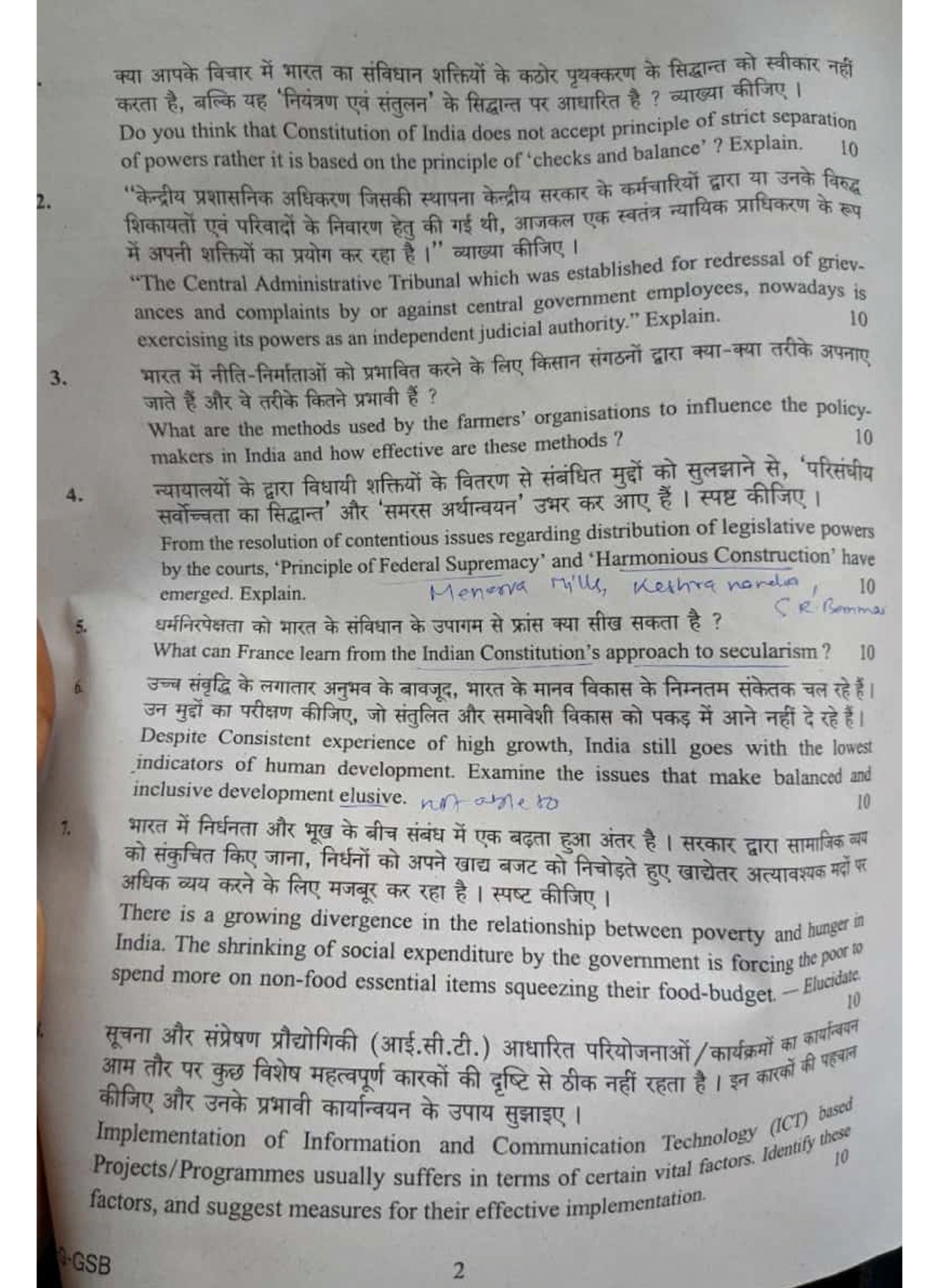 Q1. Do you think Constitution of India does not accept principle of strict separation of powers rather it is based on the principle of ‘checks and balance’? Explain. (10 Marks)

Q2. “The Central Administrative Tribunal which was established for redressal of grievances and complaints by or against central government employees, nowadays is exercising its powers as an independent judicial authority.” Explain. (10 Marks)

Q3. What are the methods used by the farmer’s organizations to influence the policy-makers in India and how effective are these methods? (10 Marks)

Q4. From the resolution of contentious issues regarding distribution of legislative powers by the courts, ‘Principle of Federal Supremacy’ and ‘Harmonious Construction’ have emerged. Explain. (10 Marks)

Q5. What can France learn from the Indian Constitution’s approach to secularism? (10 Marks)

Q7. There is a growing divergence in the relationship between poverty and hunger in India. The shrinking of social expenditure by the government is forcing the poor to spend more on non-food essential items squeezing their food-budget – Elucidate. (10 marks)

Q8. Implementation of Information and Communication technology (ICT) based projects/programmes usually suffers in terms of certain vital factors. Identify these factors and suggest measures for their effective implementation. (10 marks)

Q9. ‘The time has come for India and Japan to build a strong contemporary relationship, one involving global and strategic partnership that will have a great significance for Asia and the world as a whole.’ Comment. (10 marks)

Q10. ‘Too little cash, too much politics, leaves UNESCO fighting for life.’ Discuss the statement in the light of US’ withdrawal and its accusation of the cultural body as being ‘anti-Israel bias’. (10 marks)

Q11. On what grounds a people’s representative can be disqualified under the representation of people act, 1951? Also mention the remedies available to such person against his disqualification. (15 marks)

Q13. “The reservation of seats for women in the institution of local self-government has had a limited impact on the patriarchal character of the Indian political process”. Comment. (15 marks)

Q14. “The Attorney-General is the chief legal adviser and lawyer of the Government of India.” Discuss  (15 Marks)

Q15. Individual parliamentarian’s role as the national law maker is on a decline, which in turn, has adversely impacted the quality of debates and their outcome. Discuss. (15 marks)

Q16. ‘In the context of neo-liberal paradigm of developmental planning, multi-level planning is expected to make operations cost-effective and remove many implementation blockages’- Discuss (15 marks)

Q17. The need for cooperation among various service sectors has been an inherent component of development discourse. Partnership bridges the gap among the sectors. It also sets in motion a culture of ‘collaboration’ and ‘team spirit’. In the light of statements above examine India’s development process. (15 marks)

Q18. Performance of welfare schemes that are implemented for vulnerable sections is not so effective due to absence of their awareness and active involvement at all stages of policy process. Discuss (15 marks)

Q19. “The long sustained image of India as a leader of the oppressed and marginalised nations has disappeared on account of its new found role in the emerging global order.’ Elaborate (15 Marks)

Q20. What introduces friction into the ties between India and United States is that Washington is still unable to find for India a position in its global strategy, which would satisfy India’s national self-esteem and ambitions’. Explain with suitable examples. (15 Marks) 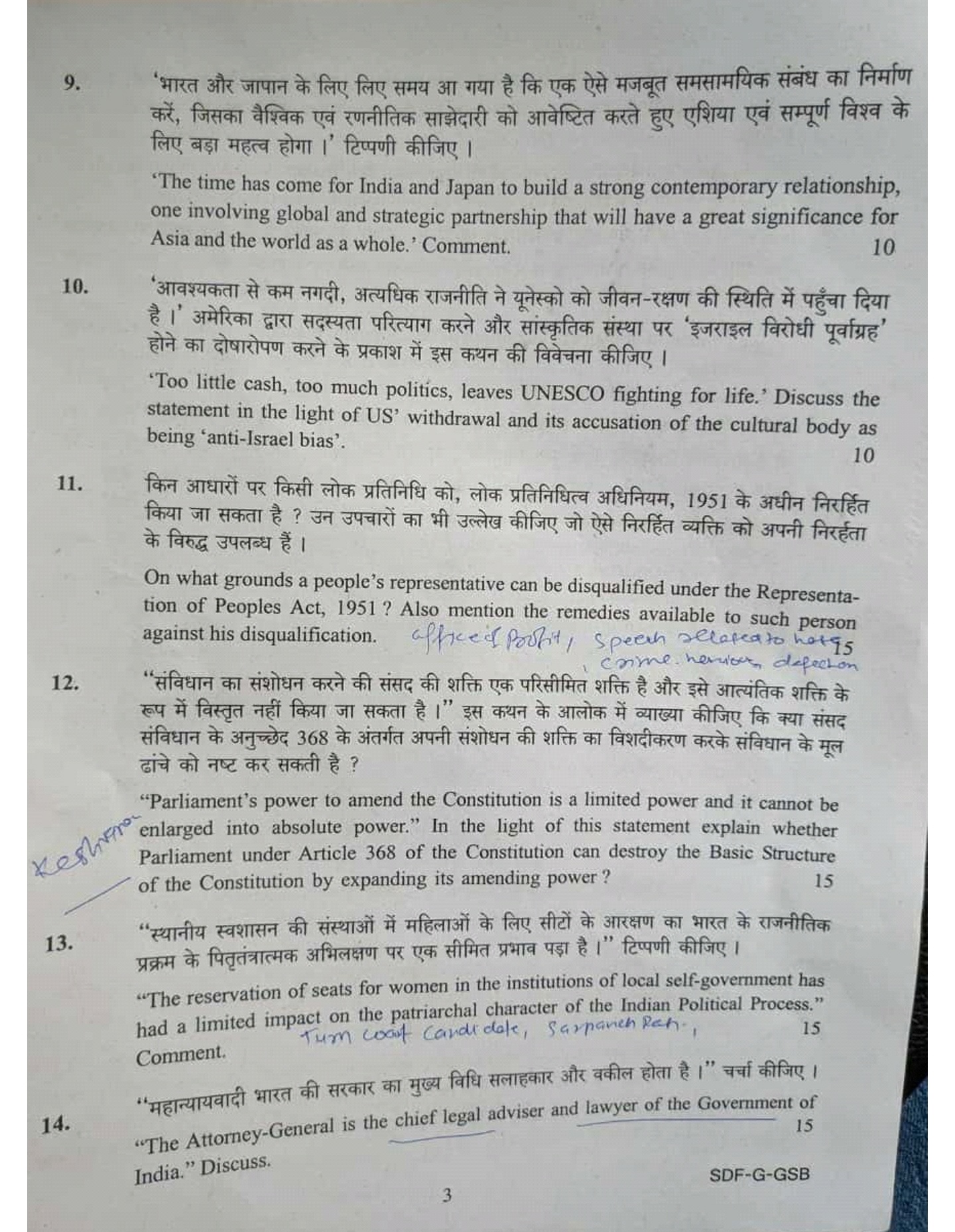 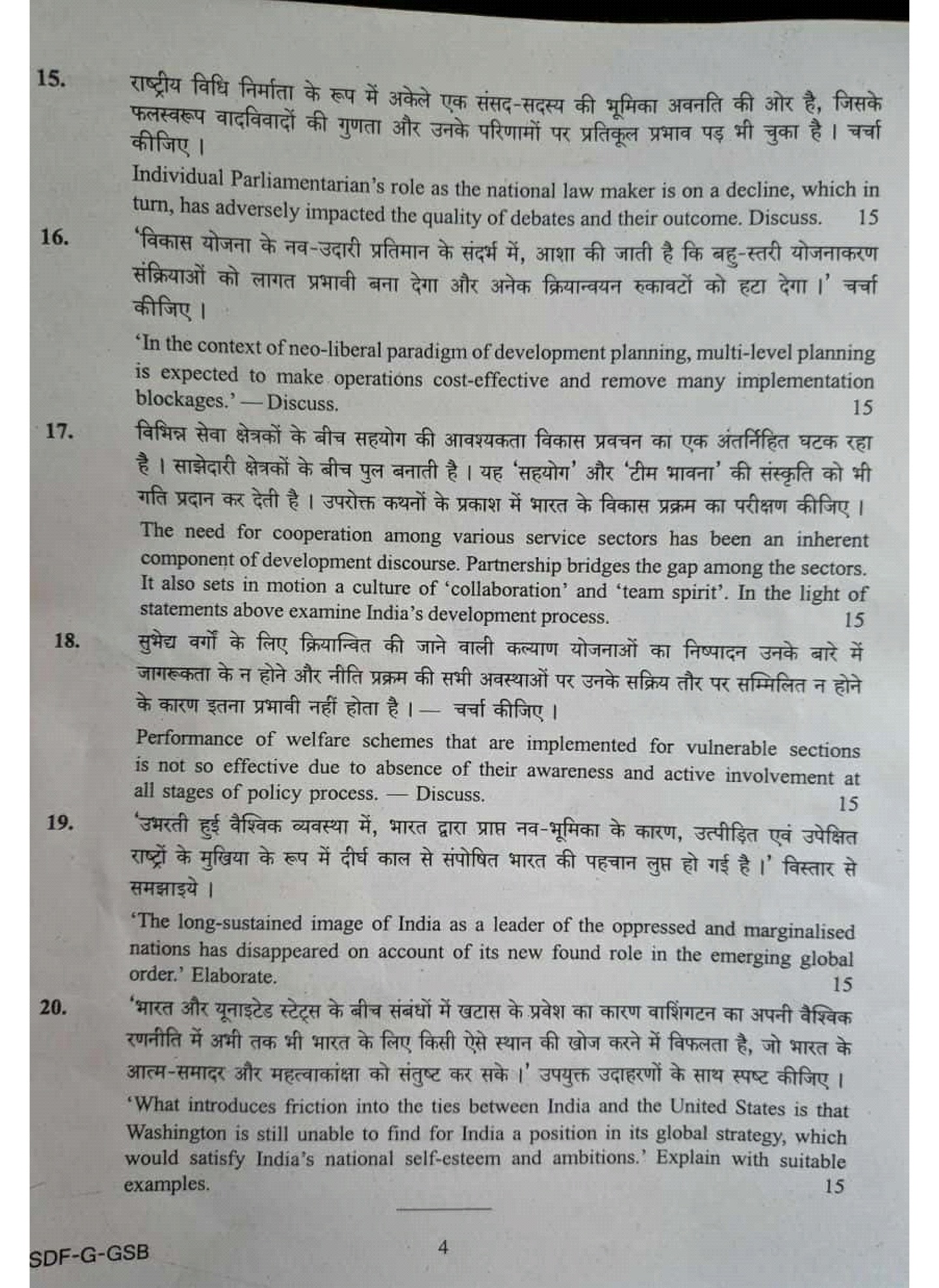