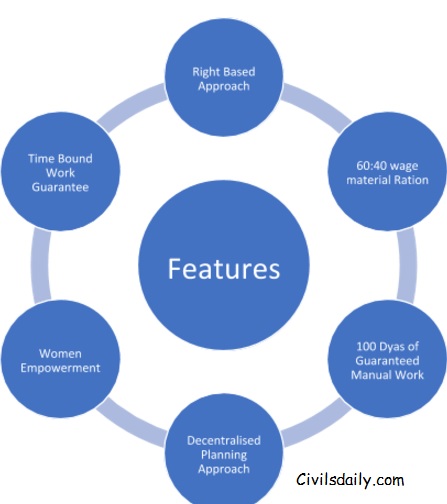 The major goals of MGNREGA are to:

The primary target of NULM is the urban poor, including the urban homeless. The NULM has six major components:

II. Capacity Building and Training (CB&T): A multi-pronged approach is planned under NULM for continuous capacity building of SHGs and their federations/collectives, government functionaries at Central, State and City/Town levels, bankers, NGOs, CBOs and other stakeholders. NULM will also create national and state-level mission management units to support the implementation of the programme for the poor.

III. Employment through Skills Training and Placement (EST&P): NULM will focus on providing assistance for skill development / upgrading of the urban poor to enhance their capacity for self-employment or better-salaried employment.

VI. Shelter for Urban Homeless (SUH): Under this component, the construction of permanent shelters for the urban homeless equipped with essential services will be supported.

The objectives of NFSM are

The Mission is adopting the following strategies: