Trickle Down Approach to Poverty

Back to Basics: The Theory

It is often said that a rising tide lifts all boats. Experience tells us that the same is not necessarily true of a growing economy. In both developed and developing economies, the benefits of growth are seldom evenly distributed.

The proponents of trickle-down economics, argues that rising incomes at the top end of the spectrum would lead to more jobs, more output, more income and less poverty as the growth and higher incomes at the top end will move at the lower end and to the poor. According to this thesis, as long as an economy is growing, the benefits will eventually reach the poor and make their way through the system that will make everyone better off.

The theory of Trickle Down represents an unhealthy obsession with GDP and Growth as the most reliable measure of economic success. The theory believes in the saying ‘One size fits all’. The theory argues that to eradicate poverty, the only thing that matters is growth. A growing economy will take care of everything. As growth happens, the fruits of growth will eventually flow to the poorest and the lower section of the society and ultimately lifting them up.

The Critique of Trickle Down Economics

According to the Organisation for Economic Cooperation and Development (OECD), Inclusive growth is “a new approach to economic growth that aims to improve living standards and share the benefits of increased prosperity more evenly across social groups”.

Note for Students: Inclusive growth refers to both the pace and pattern of growth, which are considered interlinked and therefore need to be addressed together. Inclusiveness represents equality of opportunity in terms of access to markets, resources and an unbiased regulatory environment for businesses and individuals. In a nutshell, it is not just about the quantity of growth within our economies and societies, but also about its quality.

Inclusive Growth matters because widening inequality have been shown to lead to a range of social and economic challenges for societies over time. These include both social and political instability, not to mention the sheer waste of potential that occurs when large swathes of populations do not have the opportunity to improve their situation. 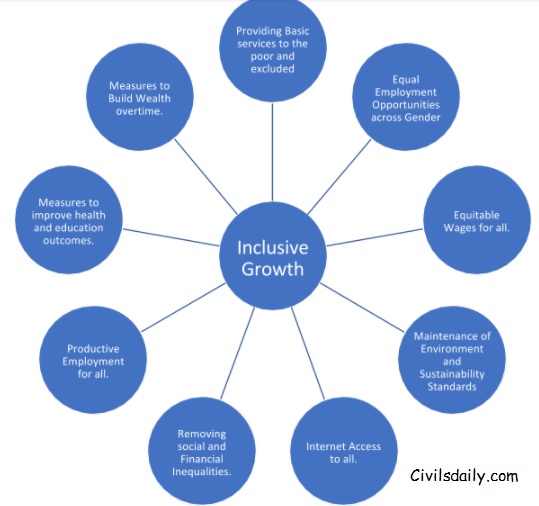 Good explanation I enjoyed a lot in reading this article it is most trustworthy information.