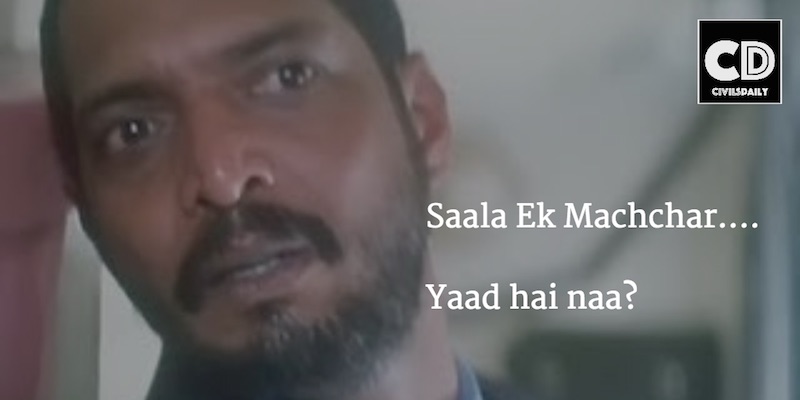 Today’s post is going to be mostly factual. You will find important tidbits around vector-borne diseases and some essay/ GS paper worthy stuff.

A country aspiring with 8% GDP growth is buffeted with a troika of vector-borne diseases – Dengue, Chikungunya and Malaria. That’s sad. But for the UPSC aspirants – it gives an opportunity to revisit all the vector-borne diseases (for Prelims) + alarming facts about India’s health care indicators.

Vector-borne diseases account for more than 17% of all infectious diseases, causing more than 1 million deaths annually.

Mosquitoes are the best-known disease vector. But there are more – In case UPSC asks you about other vectors – ticks, flies, sandflies, fleas, triatomine bugs and some freshwater aquatic snails are also in the game!

Since mosquitoes are the flavor of this season, let’s study all vector-borne diseases caused by mosquitoes:

Dengue and Chikungunya are viral diseases with very similar symptoms. Both has patient symptoms such as high fever, headache, eye pain, joint pain, rashes and lethargy. Both viral infections are spread by Aedes mosquito. And it is also possible for a patient to have Dengue and Chikungunya at the same time. Wow, that should scare you! So we will keep the dengue infographic really short –

If you want to read more on Dengue –

Why does Dengue Wreck Havoc in Delhi’s Backyard?

Rift Valley fever (RVF) is an acute, fever-causing viral disease most commonly observed in domesticated animals (such as cattle, buffalo, sheep, goats, and camels), with the ability to infect and cause illness in humans. This is also in recent news – it has infected 90 people in Niger’s western region of Tahoua since early August, according to the World Health Organization (WHO)

In severe cases yellow fever causes a high fever, bleeding into the skin and the death of cells in the liver and kidneys. Liver damage results in severe jaundice – yellowing of the skin; hence the name “yellow fever”.

CD has already written an amazing backgrounder on this. Read this one –

Malaria – Once an infected mosquito bites a human and transmits the parasites, those parasites multiply in the host’s liver before infecting and destroying red blood cells.

Despite many decades of intense research and development effort, there is no commercially available malaria vaccine at the present time. There is one vaccine close to being licensed for use in Europe and you may credit Bill and Melinda Gates foundation for that once it comes out.

If left untreated, malaria can be fatal. The aim of treatment is to eliminate the Plasmodium parasite from the patient’s bloodstream.

How does malaria cause death?

– One serious condition is called cerebral malaria, caused when malaria parasites stick in the blood vessels in the brain leading to deep coma, seizures, and death. This affects really young kids the most, usually when they are still babies and is a very serious illness.

– Malaria infection causes the destruction of red blood cells in the body and also interferes with the body’s ability to make new red blood cells. So the body becomes starved of oxygen which can lead to death.

– Malaria infection can also damage the lungs, and cause massive breathing difficulties. This is called respiratory distress, and one is the worst signs for malaria patients.

Now that we are up and running with some factual information, here are some stats/ report bytes which you can use in your essays/ mains

If you want a nice line for an essay on health care, remember this one –

India’s poorer states have health indicators that are worse than many nations in sub-Saharan Africa while the country’s healthcare spending is the lowest among BRICS (Brazil, Russia, India, China, South Africa) nations, as are its health indicators.

Usually, when you express your concern over a country’s health initiatives, you think on these lines –

As per the 12th Five Year Plan document, total public funding for core health is envisaged to increase to 1.87 percent of GDP by the end of the plan.

China spends 3% while the figure for the U.K. is eight percent Even the world’s poorest countries, like Burundi in Africa, for instance, invest around nine percent in public health.

The country remains nearly 500,000 doctors short of reaching the World Health Organization norm of one doctor per 1,000 citizens.

With more than 740,000 active doctors at the end of 2014 — a claimed doctor-patient population ratio of 1:1,674, worse than Vietnam, Algeria, and Pakistan — the shortage of doctors was one of the health-management failures cited by the report of a parliamentary committee on health and family welfare, which presented its findings to both houses of Parliament on March 8, 2016.

So, these are all the alarming health statistics going around which you can easily use in your GS Mains answers. If you have other similar stats/ quotes/ reports – do write them down here.