Before we deep-dive into the topic, have a look at the TED talk below.

Broadly speaking, Stem cells is a naïve/immature/unspecialized cell that can

i. divide to form similar cells (self renewal) and

A. Classification of Stem Cells

Depending on their ability (potency) to develop into different specialized cells, stem cells can be

Depending on from where they come from different places in the body or are formed at different times in our lives. These include

 Adult stem cells also called somatic stem cells that appear during fetal development and are present in different tissues of our bodies throughout life.

 Induced pluripotent stem cells or iPSCs cells are not found in the body but engineered in a laboratory from cells of the body, such as those from the skin. The iPSC cells have properties similar to those of embryonic stem cells.

A fertilised egg has a totipotency for about 3-4 days. It then remains turns into a multipotent cell. Finally specializes further. 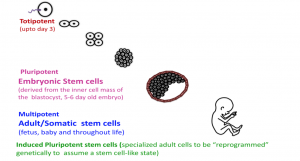