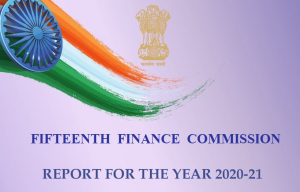 Key recommendations in the first report (2020-21 period) include:

Devolution of taxes to states

Income distance: Income distance is the distance of the state’s income from the state with the highest income.  The income of a state has been computed as average per capita GSDP during the three-year period between 2015-16 and 2017-18.  States with lower per capita income would be given a higher share to maintain equity among states.

The Demographic Performance criterion has been introduced to reward efforts made by states in controlling their population.   It will be computed by using the reciprocal of the total fertility ratio of each state, scaled by 1971 population data.   States with a lower fertility ratio will be scored higher on this criterion.  The total fertility ratio in a specific year is defined as the total number of children that would be born to each woman if she were to live to the end of her child-bearing years and give birth to children in alignment with the prevailing age-specific fertility rates.

In 2020-21, the following grants will be provided to states:

(ii) Grants to local bodies, and

The Commission has also proposed a framework for sector-specific and performance-based grants.  State-specific grants will be provided in the final report.

Guidelines for performance-based grants include: (i) implementation of agricultural reforms, (ii) development of aspirational districts and blocks, (iii) power sector reforms, (iv) enhancing trade including exports, (v) incentives for education, and (vi) promotion of domestic and international tourism.  The grant amount will be provided in the final report.

The Commission recommended forming an expert group to draft legislation to provide for a statutory framework for sound public financial management system.   It observed that an overarching legal fiscal framework is required which will provide for budgeting, accounting, and audit standards to be followed at all levels of government.

(i) setting up of a non-lapsable fund, (ii) levy of a cess, (iii) monetisation of surplus land and other assets, (iv) tax-free defence bonds, and (v) utilising proceeds of disinvestment of defence public sector undertakings. 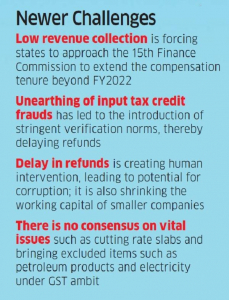 Even as the work of the Commission was in a fairly advanced stage, designed towards submitting the report by the stipulated date, there were new developments which impacted the recommendations of the XV-FC.

First was the enactment of the Jammu and Kashmir Reorganization Act, 2019, leading to the creation of two new UTs. The FC needs to closely examine how best the needs of the UT of J&K can be addressed keeping in view all relevant factors.

Second, the global scenario is unpredictable and experiencing a synchronised slowdown. After successive downward revisions, the IMF forecast global growth for 2019 at 3 per cent, which is the lowest since the global financial crisis of 2008-09, with further downside risk.

Third, like many other countries, India too is going through a period of economic sluggishness. The growth in real GDP is expected to slow down from 7.2 per cent in 2017-18 to around 6 per cent estimated for 2019-20.

Fourth, weak revenue collections, driven by slowing activity as well as teething problems in implementing some of the newly introduced structural reforms, have elevated the fiscal risks. With real economic growth at a seven-year low, combined with relatively low inflation, growth has been weak in nominal terms as well, leading to a weak tax base.