A CM takes oath at 4 am in the morning. MLAs are taken to an unknown destination or a resort with their mobiles and all communications virtually shut! Likewsie, if unconstitutional principles and practices no longer excite the citizens, but some political norms do, then our democracy is in trouble.

Turbulence in governments — involving the “switching of sides” by elected representatives — has been increasingly frequent in recent months.  The ongoing political crisis in Rajasthan is neither new nor uncommon.  The past year has seen the toppling of two state governments in Karnataka and Madhya Pradesh amid allegations of political defections and horse-trading. There has also been turmoil in Goa and Manipur.

Over the debate: The Anti-Defection Law

The Anti-Defection Law under the Tenth Schedule of the Constitution punishes MPs/ MLAs for defecting from their party by taking away their membership of the legislature. It gives the Speaker of the legislature the power to decide the outcome of defection proceedings.

Exceptions under the law

To get more details on the evolution of the act, tap here:

Explained: Anti-defection law and its evolution

Issues with the Anti-defection cases these days

Rajasthan Governor returning the fresh proposal by the state Cabinet – seeking to convene a session of the Assembly has raised fresh legal questions on the powers of the Governor. But a Constitution Bench judgment of the Supreme Court has held that a Governor is bound to convene a meeting of the Assembly for a floor test on the recommendation of the Cabinet.

5) Deciding on merger or split

Yet another feature: ‘Resort’ Politics

What we can learn from the ongoing situation?

As recent events have made clear, however, the Tenth Schedule is no longer an effective check on the phenomenon of defection, and an urgent reconsideration is required. There are a few reasons why this is so.

1)  Loopholes are present in the law itself

3) Political commitment is under question

5) Role of Legislators is being compromised

6) Accountability of the government is compromised

8) Clueless voters are the ultimate losers

In sum, therefore, the anti-defection law needs to be improved than repealed.

Over the years, several amendments/recommendations have also been suggested to reform various aspects of the law.  Let’s consider some of them: 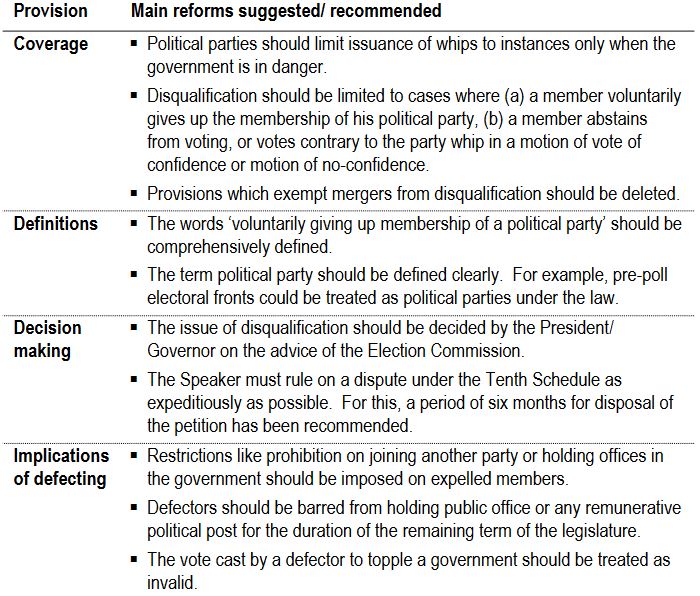 We must know that politics has a way of getting ahead of principles and practices, and establishing its own norms. It is important to understand how this growing pattern makes a mockery of Indian democracy, speaks poorly of elected representatives and is an insult to the voter.

Need of the hour is complete revamp of the anti-defection law. As Gandhiji, would put it ‘Politics without principle’, is a sin which should be avoided in all case.