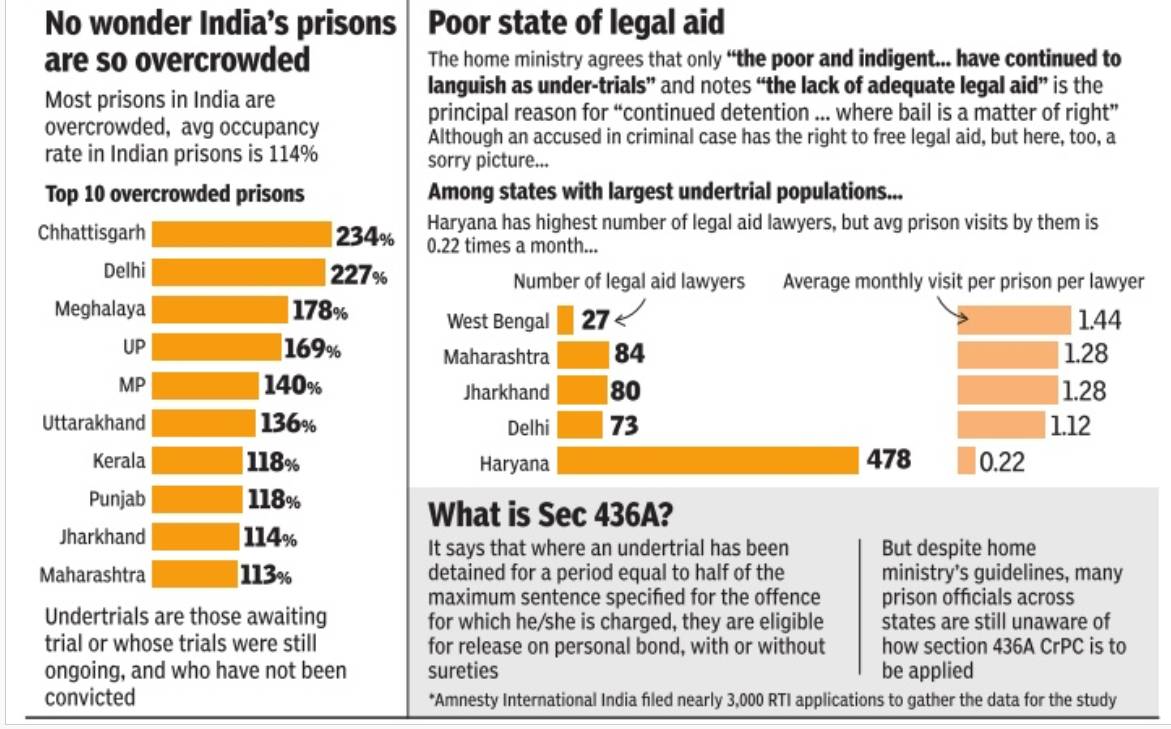 Reasons for Overcrowding in Jails

Issues with prisons in India

Through a number of judgements {like Maneka Gandhi case (Right to life and personal with dignity), Ramamurthy vs. State of Karnataka (on conditions of prisons) Prem Sankar Shukla vs. Delhi Administration (no handcuffing), Sunil Batra I and II vs. Delhi Admin (rights of prisoners)} on various aspects of condition of prisoners and prison administration, the Supreme has upheld three broad principles regarding imprisonment and custody

Various Committees and Commissions have been constituted by the State Governments as well as the Government of India to study and make suggestions for improving the prison conditions and administration.

In 2005, the Government of India constituted a high powered committee under the chairmanship of Director General, Bureau of Police Research and Development (BPR&D). This committee used the reports of Justice Mulla Committee Report & Justice Krishna Iyer Committee and made several additional and new recommendations. It also drafted a National Policy on Prison Reforms and Correctional Administration, 2007.

It is the core international treaty on the protection of the rights of prisoners. Key features include:

UN Convention against Torture or Other Cruel, Inhuman, or Degrading Treatment or Punishment (UNCAT): India signed UNCAT in 1997. However, has not yet ratified it.

Norway’s incarceration rate is only 75 per 100,000 people. Further, it has one of the lowest recidivism rates in the world at 20%. The criminal justice system in Norway focuses on the principle of restorative justice and rehabilitating prisoners. 30% of prisons in Norway are open and all prisons ensure healthy living conditions, vocational training and recreational facilities.

Prison Reforms are not coming for Implementation: