In a unanimous judgment, a bench headed by CJI Ranjan Gogoi asked the Centre to formulate a scheme within three months and set up a trust to manage the property and construct a temple.

Centre had acquired the entire 67.73 acres of land including the 2.77 acre of the disputed Ramjanmabhumi-Babri Masjid premises in 1993.

The Mosque over temple

A suit was filed by the Sunni Wakf Board for declaration and possession of the site. The Allahabad high court bench began hearing the case in 2002, which was completed in 2010.

After the Supreme Court dismissed a plea to defer the High Court verdict on 30 September 2010, the High Court of Allahabad, the three-member bench ruled that the disputed land be split into three parts.

The judgment which was pronounced with majority decision of 2:1 held that the 2.77 acres land located in Ayodhya will be divided into a three-way division — one-third for the Sunni Waqf Board, one-third for the Nirmohi Akhara and one-third to the party for ‘Ram Lalla’ or infant Ram represented by the Hindu Maha Sabha. 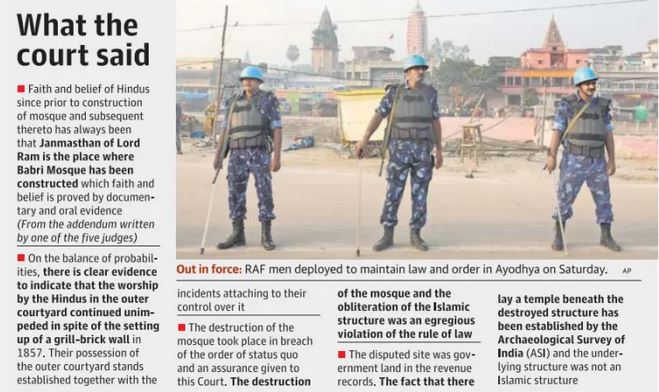 What the verdict relied upon?

How did SC use the act?

Article 142(1) states that “The Supreme Court in the exercise of its jurisdiction may pass such decree or make such order as is necessary for doing complete justice in any cause or matter pending before it, and any decree so passed or order so made shall be enforceable throughout the territory of India in such manner as may be prescribed by or under any law made by Parliament and, until provision in that behalf is so made, in such manner as the President may by order prescribe”.

Significance of the verdict

Communal politics comes to an end

Victory of harmony over hate

Latent implications of the ruling

Ruling is regarded as majoritarian coercion

Mahant Raghbir Das moves Faizabad court seeking permission to construct a temple in the vicinity of the Babri Masjid. The plea is declined.

Idols of Lord Ram is mysteriously found inside the mosque

Central Sunni Waqf Board, U.P., moves court for declaration of title of the disputed land and removal of the idols inside the mosque.

High Court delivers a majority judgment for three-way partition of the disputed property among Hindus, Muslims and Nirmohi Akhara.

SC stays the high court judgment on cross-appeals filed by the parties.

A three-judge Bench of the Supreme Court led by Justice Dipak Misra begins hearing the appeals. The main title issue is side-tracked. Muslim parties seek a reference of a contentious observation made in the Faruqui judgment that worshipping in mosques are not integral to Islam to a Constitution Bench. A majority judgment is pronounced declining the prayer.

After 40 days of hearings, the Constitution Bench reserves judgment

Constitution Bench clears the way for constructing Ram Temple at the disputed site. It orders the government to provide five-acre land to Muslims at a prominent place in Ayodhya.

What is the golden line in Ram janmabhoomi dispute?