The Trafficking of Persons (Prevention, Protection and Rehabilitation) Bill, 2018, has been passed by the Lok Sabha recently.

What is human trafficking?

The action or practice of illegally transporting people from one country or area to another, typically for the purposes of forced labour or commercial sexual exploitation.

As per the definition given by the United Nations Office on Drugs and Crime (UNODC) – ‘Trafficking in Persons as the recruitment, transportation, transfer, harbouring or receipt of persons, by means of the threat or use of force or other forms of coercion, of abduction, of fraud, of deception, of the abuse of power or of a position of vulnerability or of the giving or receiving of payments or benefits to achieve the consent of a person having control over another person, for the purpose of exploitation

Exploitation shall include, at a minimum, the exploitation of the prostitution of others or other forms of sexual exploitation, forced labour or services, slavery or practices similar to slavery, servitude or the removal of organs.’

Status of human trafficking in India

Schemes and initiatives launched by Government to tackle human trafficking 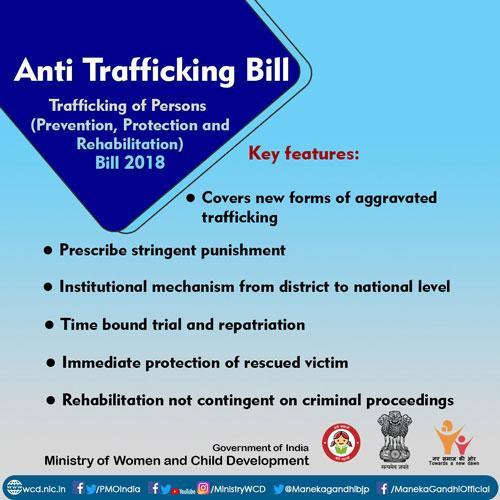 Confidentiality of victims and witnesses

The significance of the bill:

(b) Will Promote censorship

(c) The excessive scope of the bill

The bill is silent on whether existing institutional structures – such as child protection units at the state, district, block and community levels established under the Integrated Child Protection Scheme – will work parallel to the proposed institutions under the anti-trafficking bill. This can give rise to the distinct possibility of child victims of trafficking being passed around from one authority to another.

(e) Consent of Victim is disregarded

The bill will lead to greater surveillance and adult victims will be sent to rehabilitation homes or repatriated to their places of origin. There is no provision provided if ‘victims’ do not want to go to rehabilitation or accept repatriation which is against Article 19(1)(g) of the Constitution which guarantees the fundamental right to work.’

Bill doesn’t address the issue of illegal organ and skin trading, which is a form of human trafficking. There are thousands of victims who complain of being duped after being lured to migrate and sell their organs for hefty money (often deceitfully).

Trafficking of persons (Prevention, Protection and Rehabilitation) Bill is an important legislative step in dealing with the pervasive malaise of human exploitation and trade in humans. It is comprehensive in its coverage, lays down an institutional mechanism, provides for international cooperation and is sensitive towards the needs of the victim.

daily one question and answer paper one se provide karwaiye