Economic Survey 2017 mentioned a new institution PARA (bad bank) which could be utilized to solve the Twin Balance concept. Since it was a controversial institution it has raised debate among experts. A number of op-eds both in favour and against have been written against this proposed Institution. Therefore, we find this topic as a probable topic for mains 2017

The latest Economic Survey has mooted a new idea, PARA, as a solution to the NPA problem.

Ill effects of NPA on the Economy

How will PARA work?

It would purchase loans from banks and adopt value maximizing strategy to solve them. E.g. Converting loan (debt) to equity etc. Then the government can recapitalize PSBs.  In this process, losses would have to be paid to the creditors.

The bulk of this burden will fall on government as PSBs are major creditors.

The government can finance this capital by –

Capital markets – Private sector can take equity floated by PARA. Government can sell its holdings in PSBs too.

RBI is one of the most highly capitalized banks in the world. Therefore, its excess capital like securities can be transferred to PARA. 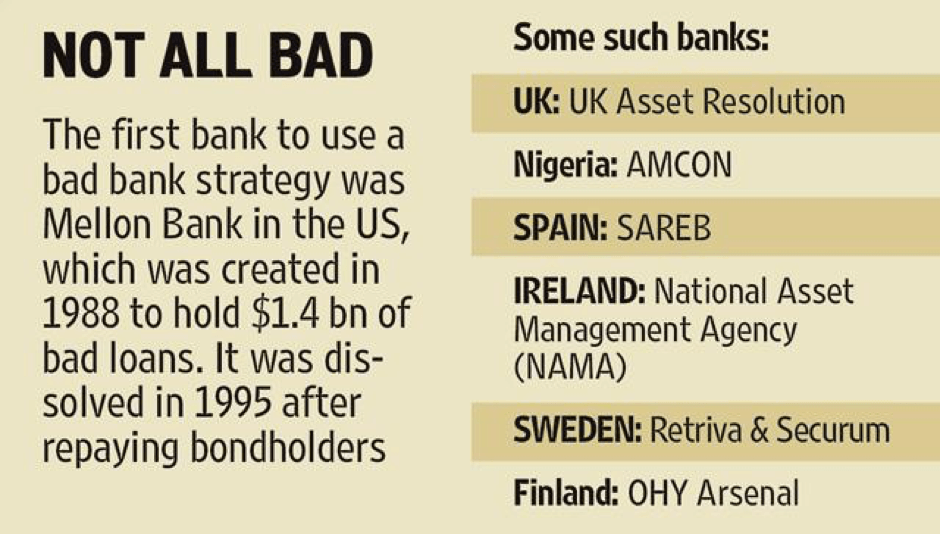 creation of a bad bank puts a strain on government finances in the short term. Even if the government funds only 20% of stressed assets in the banking system, it would exceed the net market borrowing target in 2017-18 by more than 30%. Achieving committed targets for fiscal deficit and government-debt-to-GDP also becomes difficult for the finance minister.

2. Who will have the majority stake in the bad bank? Will it be the government or private investors?

3. A big chunk of NPAs at PSBs pertains to projects that are viable.

4. Why would taxpayers’ money be used to buy bad loans of private sector? It would be socialisation of the losses of the private sector” who can pay but are not willing to pay.

Set up a bad bank to deal with NPAs at some of the weaker PSBs, instead of one that picks up NPAs from all PSBs.

It would prove less controversial if the government had a majority stake in it.

This must be complemented with other steps.

Resolution of bad loans and restoring the health of PSBs is among the biggest challenges the economy faces today. It’s a challenge that requires a response on multiple fronts. A bad bank cannot be the sole response.

Q.1) To solve the Twin Balance problem, Economic Survey has suggested setting up of a Centralised Public Sector Asset Rehabilitation Agency. Critical discuss whether setting up of an agency like PARA will be feasible?