The Disinvestment Program in India

Disinvestment of the Shares/Equity of Public Sector Enterprises

Types of Disinvestment Methods in India

The method is followed in India from time to time. The method involves the sale of the Public sector equity to the private sector and the public at large.

There are primarily three different approaches to disinvestments (from the sellers’ i.e. Government’s perspective)

A minority disinvestment is one such that, at the end of it, the government retains a majority stake in the company, typically greater than 51%, thus ensuring management control.

Historically, minority stakes have been either auctioned off to institutions (financial) or offloaded to the public by way of an Offer for Sale. The present government has made a policy statement that all disinvestments would only be minority disinvestments via Public Offers.

Historically, majority disinvestments have been typically made to strategic partners. These partners could be other CPSEs themselves, a few examples being BRPL to IOC, MRL to IOC, and KRL to BPCL. Alternatively, these can be private entities, like the sale of Modern Foods to Hindustan Lever, BALCO to Sterlite, CMC to TCS etc.

Again, like in the case of minority disinvestment, the stake can also be offloaded by way of an Offer for Sale, separately or in conjunction with a sale to a strategic partner.

Disinvestment and Privatisation are often loosely used interchangeably. There is, however, a vital difference between the two. Disinvestment may or may not result in Privatisation. When the Government retains 26% of the shares carrying voting powers while selling the remaining to a strategic buyer, it would have disinvested, but would not have ‘privatised’, because with 26%, it can still stall vital decisions for which generally a special resolution (three-fourths majority) is required.

The Way Ahead: What should be the Objectives of Public Sector Enterprises Disinvestment and Restructuring? 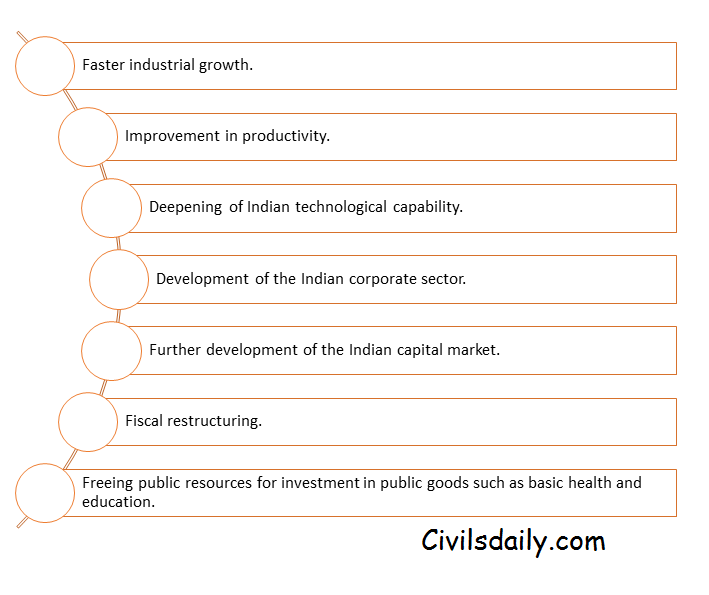 The means of achieving these objectives involve considerations such as the injection of greater competition into the industrial economy in order to foster a healthier market structure.