In 2000, 189 nations made a promise to free people from extreme poverty and multiple deprivations. This pledge became the eight Millennium Development Goals to be achieved by 2015. In September 2010, the world recommitted itself to accelerate progress towards these goals.

The MDGs consists of eight goals, and these eight goals address myriad development issues. The eight (8) Goals are as under: 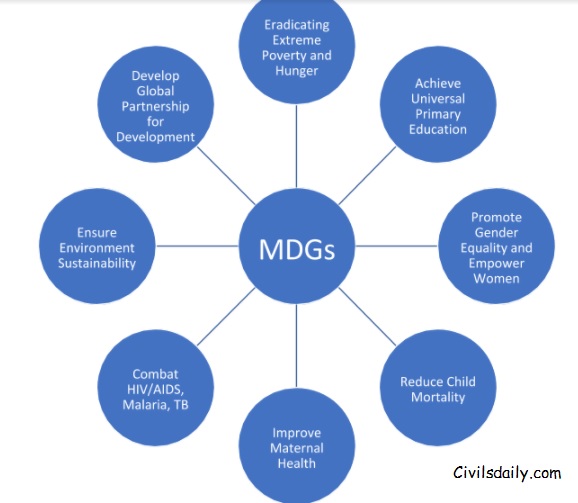 Eighteen (18) targets were set as quantitative benchmarks for attaining the goals. The United Nations Development Group (UNDG) in 2003 provided a framework of 53 indicators (48 basic + 5 alternative) which are categorized according to targets, for measuring the progress towards individual targets.

A revised indicator-framework drawn up by the Inter-Agency and Expert Group (IAEG) on MDGs came into effect in 2008. This framework had 8 Goals, 21 targets and 60 indicators. India has not endorsed this revised framework.

Target: Halve, between 1990 and 2015, the proportion of people whose income is less than one dollar a day.

Target: Halve, between 1990 and 2015, the proportion of people who suffer from hunger.

Target: Ensure that by 2015, children everywhere, boys and girls alike, will be able to complete a full course of primary education.

Target: Eliminate gender disparity in primary, secondary education, preferably by 2005, and in all levels of education, no later than 2015.

Target: Reduce by three quarters between 1990 and 2015, the Maternal Morality Ratio.

Target: Have halted by 2015 and begun to reverse the spread of HIV/AIDS.

Target: Have halted by 2015 and begun to reverse the incidence of Malaria and other major diseases.

Target: Integrate the principle of sustainable development into country policies and programmes and reverse the loss of environmental resources.

TARGET: Halve, by 2015 the proportion of people without sustainable access to safe drinking water and basic sanitation

TARGET: By 2020, to have achieved a significant improvement in the lives of at least 100 million slum dwellers

Target: In co-operation with the private sector, make available the benefits of new technologies, especially information and communication.

India’s Progress in a Nutshell 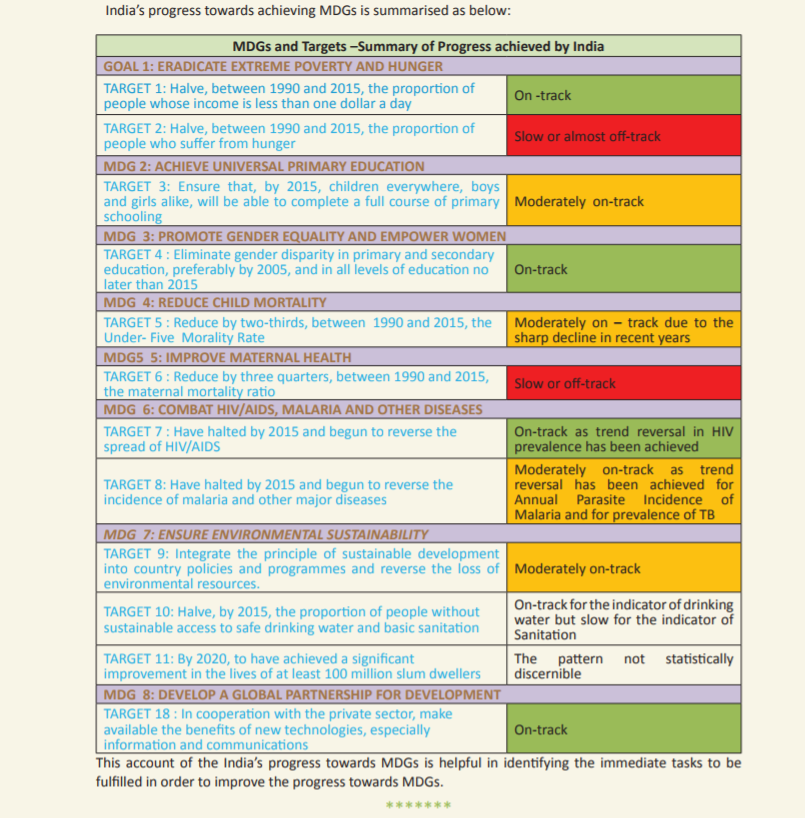